Bong Joon-ho And Jeremy Discuss The Magnificent Obsession Of SNOWPIERCER! 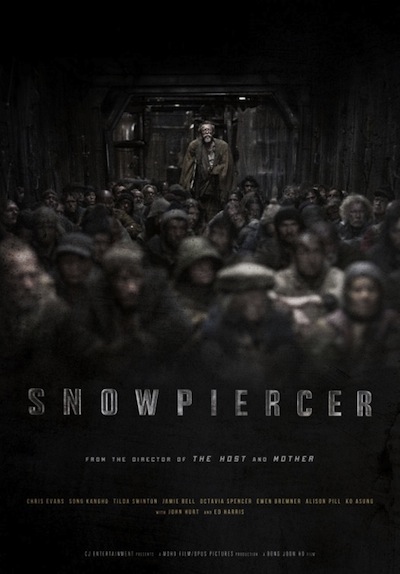 Bong Joon-ho's SNOWPIERCER is an exhilarating work of science-fiction set seventeen years in the future, where all that remains of humanity has been crammed onto a massive bullet train that traverses an icy, uninhabitable Earth. The passengers have, of course, established a class system that runs the length of the train, from the impoverished, overpopulated tail section to the luxurious, carefree front - and that balance has at last proved unsustainable, as an uprising led by Curtis Everett (Chris Evans) threatens to plow forward, car by car, all the way to the extravagant quarters of the train's creator/ruler Wilford (Ed Harris).

To reveal more of the story would be to ruin the escalating sense of awe and invention that makes this the most entertainingly unpredictable film of Bong's career. Never one for convention (even when working in a genre as specific and limiting as the giant monster movie with THE HOST), Bong and co-writer Kelly Masterson have constructed a tale that veers from gritty naturalism to complete surreality; it's a masterful blend of opposed tones and emotions that, even at its most bugfuck, keeps the audience fully engaged. That it's so ambitiously large in scope and populated with movie stars gives the movie even more of a charge; something this odd and thematically challenging isn't supposed to have such impressive production value in this day and age.

It's tempting to say that Bong is taking his cue from the socially conscious sci-fi pictures of the the late 1960s and early '70s, but the director insists that his movies aren't that calculated. As he explains in the below interview, Bong is inspired by moments of his own imagining, and once he gets obsessed with a particular image, he has to get it out of his system. I spoke to Bong through an interpreter, so our conversation was unfortunately brief, but I think he succinctly conveys his idiosyncratic take on filmmaking. I'd love to talk to him at length one of these days, but right now I'll settle for this and another ten viewings of SNOWPIERCER. 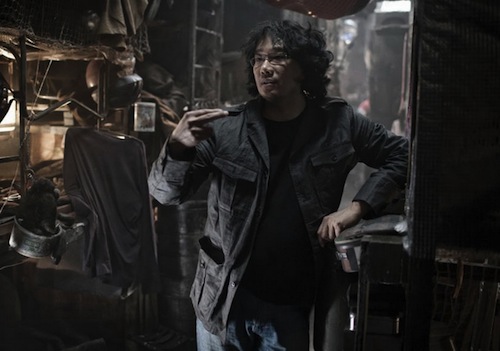 Jeremy: There seems to be a good deal of anger fueling your films. What is it that makes you feel like you have to make a movie?

Bong Joon-ho: It just happens naturally. An obsession comes about, and it's not intentional, but I get the feeling if I don't make this film right now I'll get sick or something will happen. It's not really about the message, it's just an image. For example, shooting a torch relay inside of a train, which suggests the Olympic torch relay: it's just an obsession, and I have to shoot it to relieve that obsession. It's really a series of small and big images or obsessions; it's almost like the story is an excuse to shoot these things.

Jeremy: You've made a serial killer movie, you've made a giant monster movie, and now you've made a science-fiction movie. You like to play around with genre. Do these images come to you within the confines of a specific genre?

Bong: Perhaps this is irresponsible, but I don't approach it as if I'm planting a flag in the genre. I'm certainly conscious of genre conventions, but it's really about the image or the obsession I'm trying to make, and then the genre comes after that. It's not like I rigorously study the genre and get to a point of understanding, and then try to deliberately twist them or destroy them. After I've explored them and shot them, the critics then say, "Oh, this is that genre." Once I'm interested in the image, the genre is something that is secondary; it's not the thing I'm passionate about.

Jeremy: Filmmakers of your generation tend to be very referential. People like Quentin Tarantino, Park Chan-wook and Edgar Wright all love to make references, either big or small, to the movies that influenced them. You do not.

Bong: How about this film? Do you see references?

Bong: I don't have references when I'm prepping a film. When I write a script, or when I talk to my crew members to describe what I'm going for, I realize that something weird has come out and I don't have a reference for them. So I'm kind of like, "What the fuck! How am I going to explain this to my crew?"

Jeremy: And so you can't say, "Well, remember that scene in VERTIGO…" like, say, Brian De Palma would.

Jeremy: And your films are relatively free of homage.

Bong: I think my movies are always very strange.

Jeremy: Which is great. I was watching THE HOST again last night, and what I love is that it's not conventional. The family breaking into hysterics when they believe Hyun-seo has died, it's a moment of great sadness for them, and yet their outsized expression of grief becomes humorous to us. We're obviously moved by their grief, but we can't help but laugh. There's a lot of that in SNOWPIERCER, too.

Bong: I think it's natural. It's not an intentional mixture of emotions; it just naturally happens during screenwriting and shooting. When I see a scene in a movie that's just one emotion, I feel like that's more constructed or contrived. Isn't real life more like these scenes you're describing? For example, if you're at a funeral, and it's a really sad and somber environment, you might look over and see someone who's really funny. Or on a hot summer day, there's a beautiful wedding, but in the corner you see a terrifying looking person. It's just more natural to me.

Jeremy: And that calls to mind the fight with the axe-wielding thugs in SNOWPIERCER. It goes from this really brutal and choreographed fight to complete darkness, and what we see through the night vision goggles is messy and desperate.

Bong: The idea was to show a different variety in that long battle sequence. Before the fight there is the fish ritual, and then there is the torch relay and fighting under torchlight. There are so many different levels in that fight. I just wanted to make a really big, complicated action sequence in that part of the film. I also liked the idea of having a fight that's very primitive, like something that would take place between tribes in Africa; they're fighting with axes under torchlight even though it's a science-fiction film.

Jeremy: Alison Pill's appearance gets a wonderful entrance. That entire schoolroom scene knocked me sideways. You talk about images just coming to you: where the hell did that one come from?

Bong: That classroom scene… lots of things happen in it. It's a really important scene: characters die, and I felt I needed a really strong actress for that. I first saw Alison Pill in MILK, and I really liked her performance there. Just her look with the curly hair, and her acting was terrific. Also, the character is pregnant, and that was an idea contributed by Ko Ah-sung [who plays Yona in the film]. The feeling you get watching a pregnant woman firing a gun, that has a very specific feeling. And you're wondering whose child that is. Is it Wilford's?

SNOWPIERCER opens in limited release this Friday, June 27th. It will expand to other cities throughout the month of July. Do not miss this film on the big screen.