AICN HORROR Send in the Clowns: Bug cheers for the best killer clown film in years…STITCHES!

STITCHES ambled out of nowhere a while back filled with all kinds of gory fun, but what impressed me the most is how it really makes its own clown mythology suggesting that Coulrophobia may not just be all in the mind and that it’s been a secret mystic cult lurking around for centuries. Here’s my review of the film. 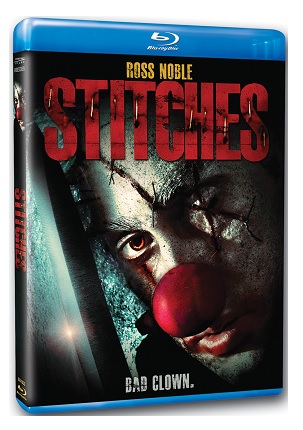 Having heard a lot of positive buzz about the new killer clown flick STITCHES, I was chomping at the bit to check this film out and afterwards, though I feel there are some pacing problems with this film, I think it did live up to its reviews calling it a cult classic in the making. 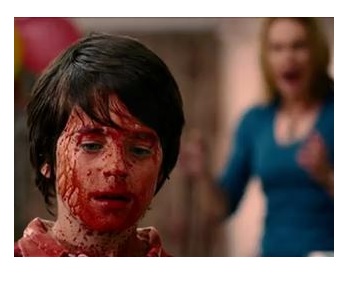 Stitches is the name of a clown who as most clowns are it seems, is down on his luck and on the verge of a mental break. All too similar to SHAKES THE CLOWN, the film opens with Stitches swigging whiskey and having sex with a woman in a worn down van. Again, like SHAKES, STITCHES seems to hate his job, his life, and especially kids. But who can blame him as he makes his way to Tommy’s birthday party and the kids pull one prank after another on him, resulting in him falling into an open dishwasher and getting a butcher knife stuck through his head? After that gory sequence in which young Tommy is doused with copious amounts of blood, we flash forward to a dream sequence (or is it?) where Tommy follows a group of clowns into a graveyard and experiences an ancient clown ritual.

Flash forward to present day, and Tommy has become Tom and also developed a phobia of clowns (and rightly so). Deciding to have a birthday party, Tom invites the whole school, but one guest shows up uninvited—Stitches, back from the grave and ready to inflict clowny vengeance upon the kids who killed him. 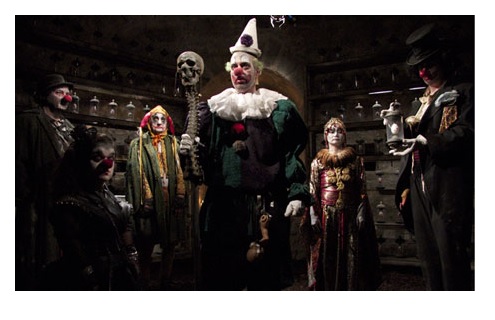 Boiled down to its basics, STITCHES is IT meets CAN’T HARDLY WAIT as a childhood mistake comes back to haunt a group of kids who have grown up to be assholes in their teens. The buildup to Tom’s big party is rather slow, but once the party ensues, the film seems to kick into high gear as Stitches proceeds to off the teens in some of the most imaginative kills to hit the screen in ages.

Brains are scooped out with ice cream scoopers, intestines are made into balloon animals, and there’s an umbrella scene that takes the cake in terms of gore and creativity. One can tell the filmmakers had a blast coming up with each of these kills, which reflect the failed attempts and clowning from the original party at the beginning. 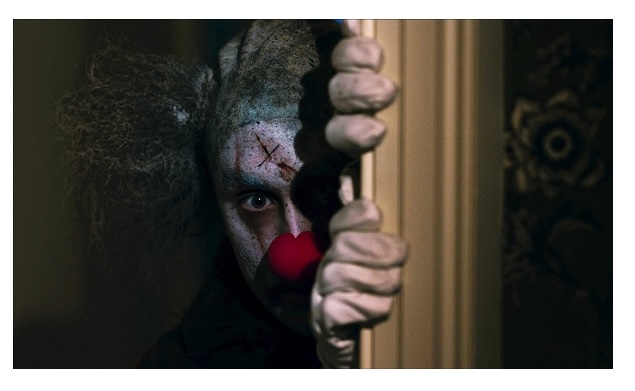 STITCHES is also pretty scary, if you’re scared of clowns, that is. Along with many scenes of Stitches lurking around in the darkness and moving awkwardly, there’s a fantastic sequence of the clown funeral pulling the curtain back on the secret society of clowns and their bizarre rituals of egg painting, performing, and unique face paintings. There’s a lot of scary clown culture that this film taps into, but it feels like the tip of the iceberg.

Though it takes its sweet time to kick into gear, once it does there are a ton of scares, laughs, and gore to enjoy. The humor hits its mark about 90% of the time, especially the personalities of the drunk kids at the party who make fun of Tom for being scared of clowns. And though I never really thought IT was very scary as a film, I do give it up that Pennywise’s visage is frightening. STITCHES taps into that pretty well without being an out and out rip-off, and does so by making the final hour a gore-filled rollercoaster ride through clown town until the end credits. STITCHES is filled with gags and gore and is sure to appease the gorehounds and spook the clown-o-phobes alike.

Check out my interview with STITCHES Director Conor McMahon here! 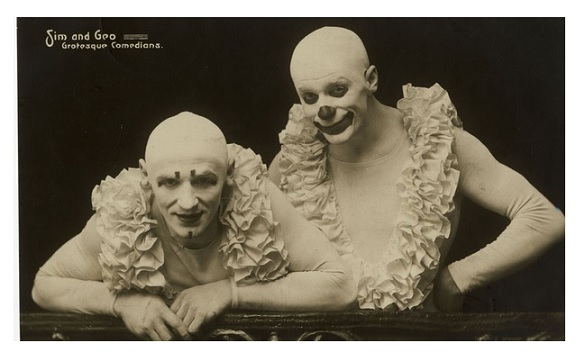 Previous Send in the Clowns Posts!
THE LAST CIRCUS
THE FUNHOUSE
SPLASH AREA: NIGHT OF THE FREAKS/CLOWN HUNT