This time I take a gander at two indie clown tales; one, an endless night of random clown violence, and the other, a bizarre farce about clowns roaming free in the wild and the hunters that track them down. Both of them far from perfect films, but still both are prime examples of the broad range of cinematic clown horror! 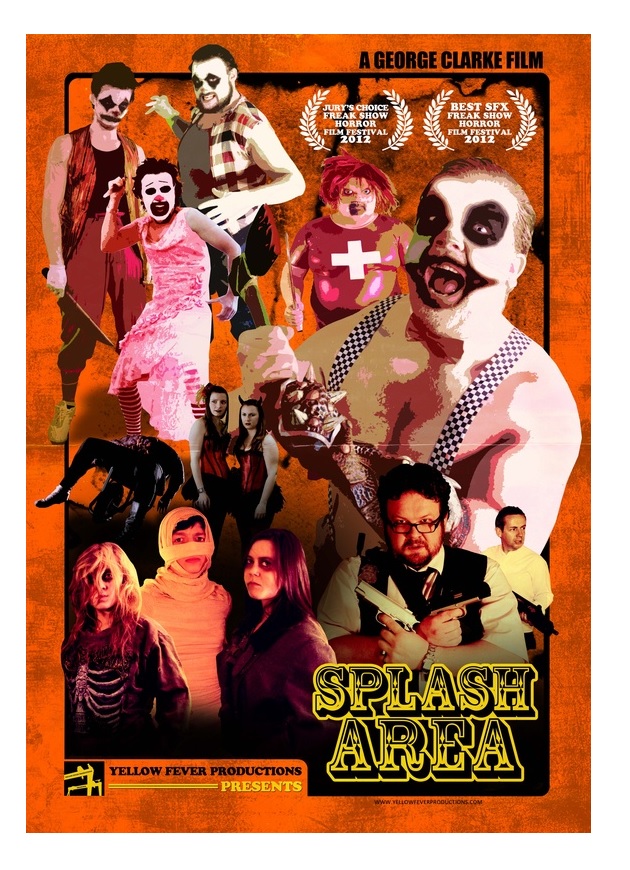 From the writer/director of the frantic melee horror-on-the-run films such as ONUS and ZOMBIE WARS: BATTLE TO THE BONE comes SPLASH AREA: NIGHT OF THE FREAKS. The film opens up with a pair of kids being told an inappropriate bedtime story by their old fart grandpa who clearly gives no shits about them. The tale involves a quintet of teens out trick or treating who run into a gang of clowns out for a rampage. Having the grandpa telling the kids this tale of clown horror is a PRINCESS BRIDE style plot device that turns out to be pretty fun as it does break the film up with some well timed humor. The story itself is rather simple—a bunch of clowns chasing a group of kids on Halloween. But sometimes simple is fun and despite it’s low budget and production, there’s some fun to be had here. 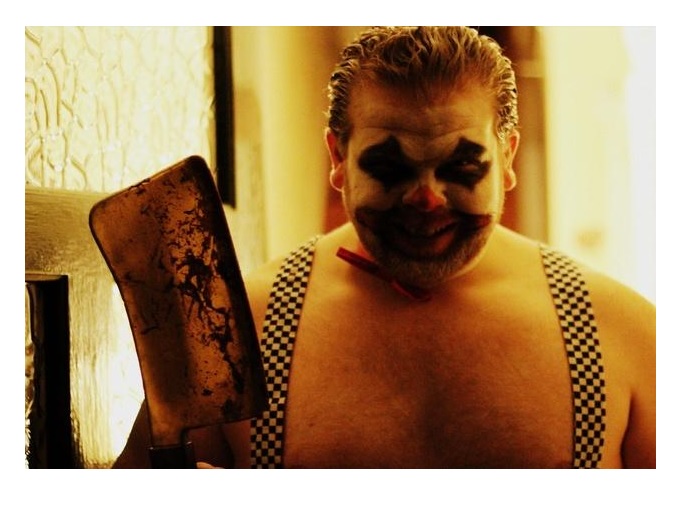 To start off, having seen the trailers for George Clarke’s films (though not the films themselves), the man seems to be a low fi master at making expansive and fast paced chase films. Now, I can only go by the pace of this film, but seeing that most of the trailers prior to this film and the bulk of SPLASH AREA focusing on running away from or having balls out battle with evil, I have to give it to Clarke for sticking to his style and honing it. For the most part, this is a chase movie with clowns stalking kids and murdering anyone in their path and Clarke keeps everything moving at a rapid rate making this feel like a marathon rather than a movie.

Sound, acting, lighting. All not so great here. The actors often seem like they’re friends of the director’s family or locals at a pub with an itch for the acting. Still, the high end technical stuff of polished Hollywood fare is nowhere to be seen. But this isn’t a film about all of that. As I’ve said twice before already, this is a film about clowns chasing kids around on Halloween. 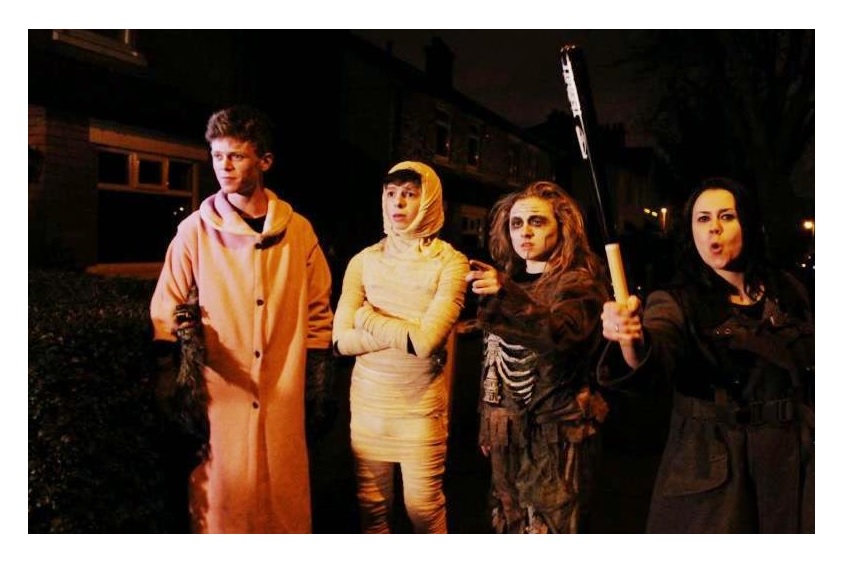 Should we be worried that these kids seem to be running all over the place away from these clowns except the authorities?

Should we be wondering why the kids don’t go to their parent’s houses?

Should we be wondering what the title SPLASH AREA means?

No. We should not, because logic like that doesn’t exist in this dojo.

What matters is that there are multiple scenes of pretty effective clowny scares. Be they moody shots of clowns creeping from the shadows or gore drenched massacre scenes of the clown gang beating someone to a pulp. This is one’s got some scary scenes in between all of those plot holes and bad acting.

The thing about this film is that it really feels like these clowns have a history. Each of their costumes, choice of weaponry, and style of mania is different. The clowns communicate in a sort of clown language made of whines, squeaks, and laughter. There’s a specific scene where a clown finds another dead clown after the kids start fighting back where he uncontrollably weeps and laughs hysterically all at once that is downright bone-chilling. In this film, it’s all about the clowns and that’s the part they get right and scary.

SPLASH AREA: NIGHT OF THE FREAKS is not a great film by a long shot. But in terms of clown horror, it does a lot right. For you clown horror completists, see it for the many bits of highly effective clown madness and just try to stomach through the clownless bits. 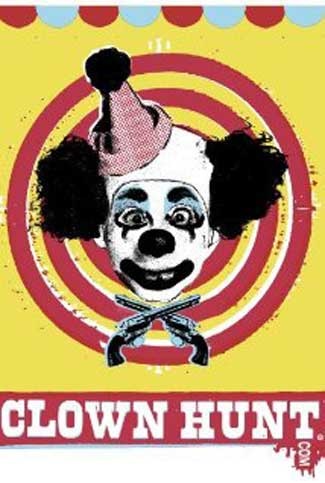 Though most of the budget here went toward clown make-up, I have to commend the makers of CLOWN HUNT for coming up with a truly original concept and running with it. Now, this doesn't mean that this low budgeter is great, but it does have quite a few well executed ideas and moments of sheer weirdness. Ultimately, CLOWN HUNT is a good idea done decently, but not completely great. 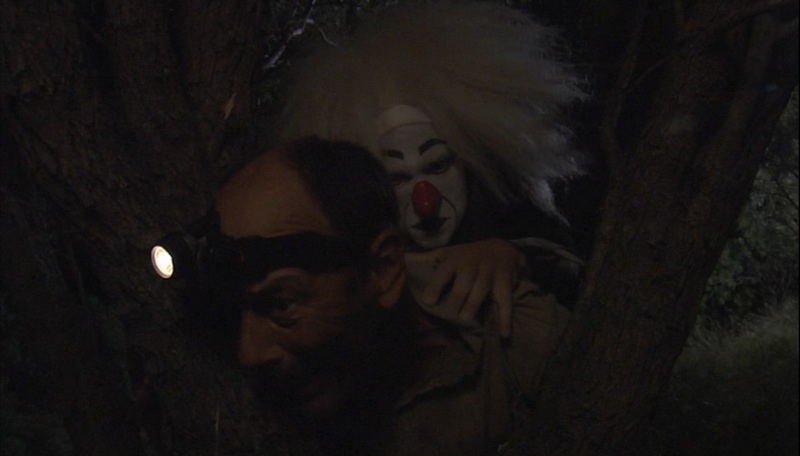 As I said above, the concept is a winner. So many horror films work as metaphors for other problems with the world. Usually it's zombies who are the most ripe to be farmed for deeper meaning. Everything from 9-11 to the AIDS epidemic has been delved into with the zombie mythos. Here, clowns is the metaphor of the day, representing everything from racism to homophobia to gun control, to border patrolling, CLOWN HUNT uses the metaphor of the clown to represent "the other" here as the story follows a troop of good old boys out to enjoy a beautiful afternoon of clown hunting.

Though the acting is not top notch, I've seen much worse and a lot of these proud Texas hunters load up their guns, down a ton of beers, and head out to clown territory on the opening day of "Happy Clown Season". But this isn't a free for all. There are rules. Sad clowns are off limits until "Sad Clown Season", which protects Shitty Fred, a hobo clown who wanders around trying to be shot and killed by the hunters. Killing a sad clown awards a swift penalty, as illustrated in this film. It's the straight faced approach to this odd mythos that makes this entire film work. 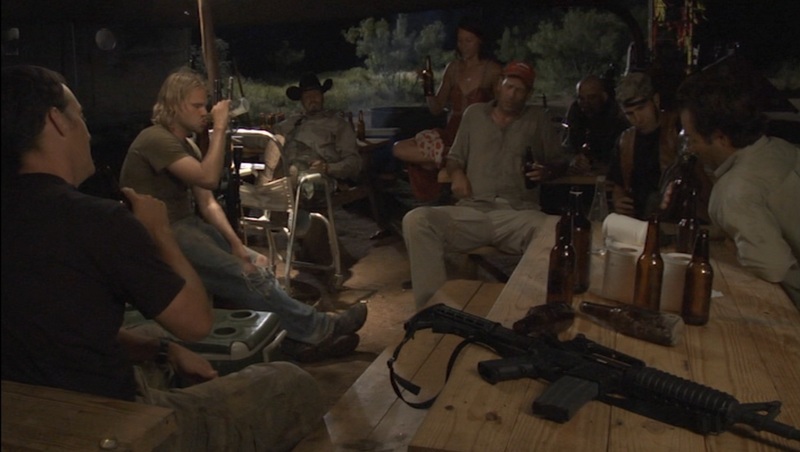 While the hunters are often portrayed as idiots with buckshot and beer on their breath, the clowns themselves are not completely without sin. Early on, the hunters witness the clown ritual of baby chicken stomping and kitten tossing, letting the viewer know that on top of there being an over-abundance of clowns in the world, they also are not kind to animals. Scenes of the clowns eating, interacting with one another, having sex, and roaming the range in their natural habitat is a nice touch here and again serves as some of its most endearing aspects to watch (though the clown mating scene with clown shoe fellatio was way too long). 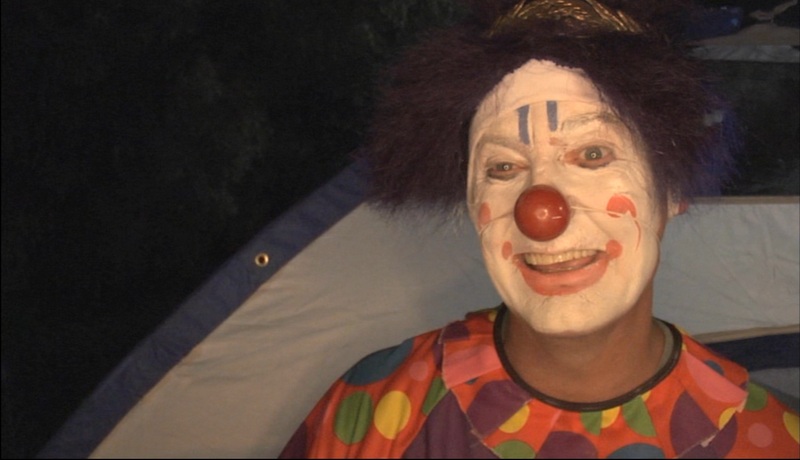 I also thought the scene where one of the hunters has a crisis of conscience and comes out as a closeted clown added more nuance to the thinly veiled metaphor homosexuality and its acceptance in the good old boy community. There's even a scene of clown rape, which is both disturbing and funny all at once. Had that metaphor been delved into with some more thought, the makers of this film would have a pretty fantastically nuanced film here. But instead a lot of the time, the cheap laugh is gone for with mixed results. The ending as well is kind of a mess with a lot of the fun sucked out of it in order to have an action sequence that is a little too much for the budget to allow as the battle between clowns and hunters ignites into a nuclear battle to end all battles.

In the end, there were quite a few scenes of hilarity (every scene with Shitty Fred is gold) and more than enough scenes that are "just damn wrong" as with the clown sex scene, the clown rape scene, the kitty tossing, and the chick stomping to warrant this film as an odd little curiosity. Clocking in at just over an hour, the joke well runs dry about 40 minutes in making me think this would have made for a fantastic 20-30 minute short. As is, it's just plain weirdness. But if you're creeped out by clowns, CLOWN HUNT is going to hit buttons you didn't know you had.

Here’s the trailer, plus something called JAVELINA which looks pretty low fi awesome to me too. 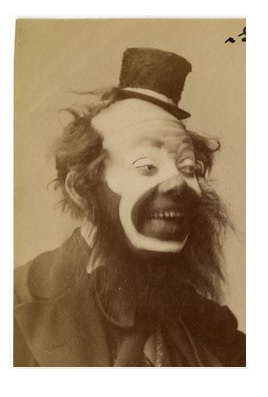