Ahoy, squirts! Quint here. The name Tom Joad will tickle the memory box of some long-time AICNers out there. He and I came up around the same time back in the very early days of the site until he threw his bindle over his shoulder and headed west.

You'll never find a bigger horror fan than Mr. Joad and he has come back to tell ya' about a low budget horror flick he fell in love with called MISCHIEF NIGHT, which just hit VOD.

I'll let you read the particulars from Mr. Joad. Here he is! 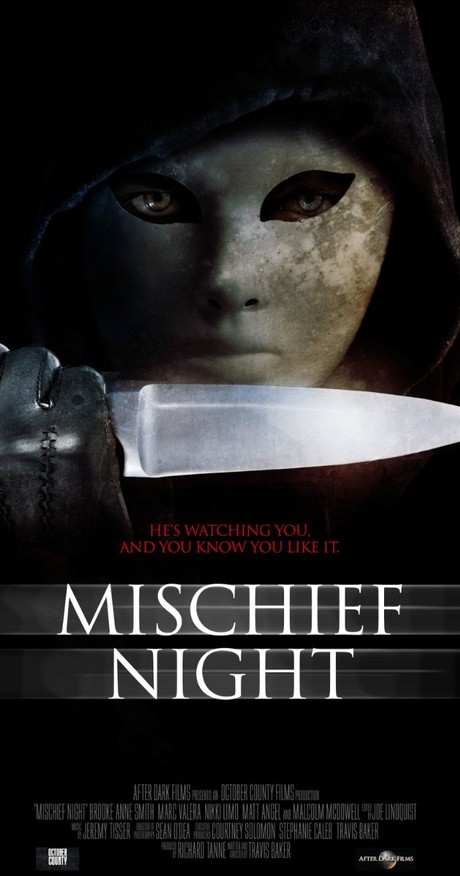 Tom Joad here, with a quick word on a cool film I caught recently. I realized afterward that the title matches another film also entitled Mischief Night, but this one is just about to hit the streets.

MISCHIEF NIGHT is one of those types of films that really gets you charged up. I extend the highest form of praise when I say that this is one of those movies that makes you want to immediately start writing a script with one hand while shooting with your other. Inspiring in the same way CLERKS, EL MARIACHI, and THE EVIL DEAD made you want to grab a camera and start shooting your own movies.

Over the course of the film, I kept asking, "What am I watching??" A slasher ala Friday the 13th? A self-aware horror flick like Scream? A revenge story in the vein of Audition? A new take on When A Stranger Calls? It's many of these, through Kevin Williamson by way of John Hughes. It's tough to combine multiple genres in a way that simultaneously feels both fresh and familiar - the plot will keep you guessing until the end, and I love that it struck such tight-wire balance with a self-assuredness that keeps you on your toes as it zigs every time you think it's about to zag.

Essentially the story of Kaylie, a cute blonde high school girl who is helping a friend by covering a babysitting shift for her on the night before Halloween, AKA Mischief Night, when kids thrive on pulling pranks and wreaking havoc in their community. Case in point, a group of young boys traipse from yard to yard, destroying decorations, flipping trashcans, and hurling eggs at homes before they encounter a jogger in the street, only to pelt him with eggs and run away. "It's Mischief Night, asshole!" the boys scream, leaving him dripping with raw egg yolk in their wake of destruction.

While Kaylie is babysitting, a man who claims to be a concerned neighbor, played by none other than Malcolm McDowell, visits her. Providing her with a stern recommendation to keep her door locked and not to open it for anyone, he also gives the audience some obligatory exposition regarding the traditions of Mischief Night. Even if McDowell's character has the best of intentions, and even if he actually is whom he claims to be, he really comes across as an uber pervy letch, the gleam in his eye seemingly indicating his desire to eat Kaylie as an appetizer. And he plays it perfectly, as only Malcolm McDowell can.

The characters of Kaylie and The Man have a chemistry that works in a way that feels genuine. The Man, played by Marc Valera, is working through an extremely severe mid-life crisis filled with self-evaluation, and he hesitates whenever Kaylie speaks, often leaving him wearing a blank, slack-jawed stare. Fortunately for him, she is world-wise enough to fill in the blanks for him. At least she seems to be - like so many of us found ourselves in the precocious days of our youth. Consumed with anger, the guy really needs to find himself a good therapist and a sex slave, but instead he gets Kaylie. And off his lid as he is, he meets his match in her and then some. "You are so strange," he tells her. Talk about the understatement of the year.

What really sets MISCHIEF NIGHT apart is the way in which the characters are handled. While setting up the familiar horror tropes, the film becomes its own when the characters are given the time and space to develop into something real. Both are flawed and troubled, yet still young enough to be able to turn things around and make a change, the question iswill they choose to? Both of them live isolated lives, in spite of being surrounded by family and friends, choosing not to embrace the love that surrounds them but instead find solace within themselves. The problem, of course, is that neither of them has found much pleasure along their chosen path. They both struggle to make a human connection yet neither of them realizes it. They're perfectly suited for each other, but the question is whether they will realize this fact before it's too late. The film plays out as real-world psychological horror.

Meanwhile, the punk kids eventually meet their just demise, and it feels so satisfying. While I ought to be concerned at how much I enjoyed watching teenage juvenile delinquents being disemboweled, I blame the filmmakers for handling it in such a skillful manner that I was able to derive such enjoyment from their demise.

This little gem hits the shelves soon – give it a shot!