Jeremy Reviews A MILLION WAYS TO DIE IN THE WEST 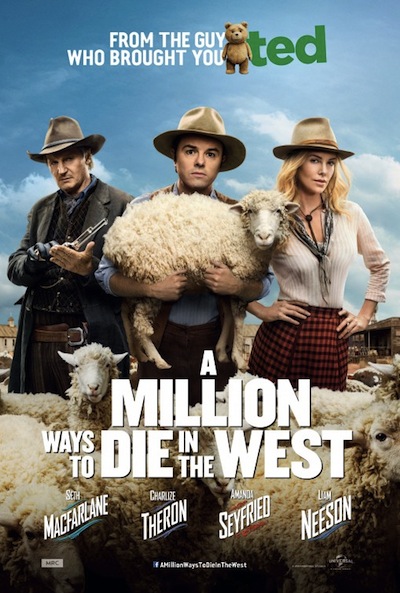 If the key to making a great western consisted solely of shooting the ever-loving widescreen shit out of Monument Valley, Seth MacFarlane's A MILLION WAYS TO DIE IN THE WEST would be installed in the pantheon based on its opening credits sequence alone. As Joel McNeely's rambunctious score shamelessly quotes Elmer Bernstein shamelessly quoting Aaron Copland, MacFarlane's second unit takes to a helicopter and boldly hoses down every last inch of the sandstone buttes made famous by John Ford. It's as visually impressive and fundamentally soulless as it sounds. It also drags on a good two minutes too long, thus encapsulating much of what is wrong with the film.

Western comedies can be lots of fun in their own right, or they can make you spend every excruciating second wishing you were back home watching BLAZING SADDLES. MacFarlane is smart and successful enough to know that invoking the latter is death, so he frames his film as a conventional western told from a modern-day perspective. MacFarlane's Albert is the wiseass protagonist who is horrified to find himself living in a cruel and ignorant time; he's an enlightened man desperate for society and medical science to advance beyond frontier justice and borderline-medieval methods. Early in the film, Albert launches into an amusing monologue about the myriad dangers of life in the old west, and you briefly glimpse the potential for MacFarlane to pull off a vintage Woody Allen comedy peppered with the scatological digressions his FAMILY GUY fans demand. If you've seen MacFarlane on REAL TIME WITH BILL MAHER, you know that he's a sharp, reasonably well-read dude who's as appalled at today's backwards conservative thinking as Albert is with the comparably primitive ways of his era; he could ably mix the high with the low if he wanted.

Unfortunately, MacFarlane has teamed once again with the witless writing duo of Alec Sulkin and Wellesley Wild, creators of the unspeakably terrible/mercifully canceled FOX sitcom DADS (Sulkin is the comedic genius who tweeted a Pearl Harbor joke at the same time thousands of people were dying in the wake of the 2011 Japan earthquake*). Collectively, they lean on gross-out shock, which wouldn't be a problem if they possessed a fraction of the Farrelly Brothers' talent for escalation. Instead, awful/bizarre things just happen. Charlize Theron spikes Neil Patrick Harris's drink with a laxative, which leads to a clumsy diarrhea-in-a-hat payoff; Liam Neeson is about to rape Theron, but she knocks him out with a rock and sticks a wildflower in his ass; a snake oil salesman is unexpectedly gored by a bull. The most genuinely shocking punch line in the film involves Theron dropping a Stephen Foster reference.

While it's commendable that MacFarlane has tried to make a real widescreen western infused with his coarse brand of humor (even though Michael Barrett's cinematograph is largely a cloddish triumph of color correction), he's not a particularly skilled storyteller. Albert's desire to win back his fiancee Louise (Amanda Seyfried) is just window dressing once Anna (Theron) takes an interest in his love life; while it's infuriating to lose your girl to a handlebar-mustachioed shit-heel like Foy (Harris), there's no dramatic tension when your fallback is one of the most beautiful actors on the planet. Meanwhile, the film's primary threat, Neeson's murderous outlaw Clinch (who essentially owns Anna), is sidelined for far too long. Had MacFarlane added a novel twist or two to the narrative, perhaps he could've managed these two arcs a little more gracefully, but the stock nature of the story renders these non-comedic elements inert. The result is a punishingly long 116-minute runtime.

Most damaging of all is MacFarlane's odd decision to have many of the actors serve as a laugh track to his incessant riffing. From the opening gunfight (where his otherwise uptight pal Edward, played by Giovanni Ribisi, chuckles at his lowbrow antics) to Theron's constant guffawing at his every hack-comic observation, MacFarlane comes off as incredibly insecure. "You're not laughing? Well, Sarah Silverman is. What's your problem? I'm a goddamn crack-up!" For a guy who's got one of the longest-running shows on television (and whose last film was a massive hit), it's unbecoming - and it only draws attention to how ineffective he is as an onscreen comedic performer. Maybe that explains it: he needs someone to sell what his strangely expressionless face cannot.

But, hey, thanks for COSMOS, Seth!

*It wasn't even a joke really. "If you wanna feel better about this earthquake in Japan, google 'Pearl Harbor death toll'." At best, it's a lame attempt at Michael O'Donoghue-esque viciousness** - which only O'Donoghue has ever been able to pull off. Sulkin later apologized, stating that he wasn't aware how widespread the devastation was. So if only a handful of people died, it would've been funny.

**If Michael O'Donoghue were alive and on Twitter today, he'd be unemployable in Hollywood. Something to consider.