FORTUNE AND GLORY: 'In Defense of Willie Scott' by Nordling

Ahoy, squirts! Quint here with another Fortune and Glory entry, this time from our own Nordling who bravely took on the task of defending one of the most hated franchise characters this side of Jar Jar Binks, Miss Willie Scott (her stage name).

Quick story before I yield the floor to Mr. Nordling. In 2005 I traveled to the NYC World Premiere of War of the Worlds. There were a crazy amount of celebrities at the afterparty. Spielberg was surrounded in one corner, Tom Cruise in another, people were fawning over young Dakota Fanning's dress, Tim Robbins was having a civil chat with Bill O'Reilly (believe it or not). The only two people I didn't know personally that I talked to there were Dennis Murren and Kate Capshaw.

To Murren, I just thanked him for his large part in building the fantasy of my childhood and to Ms. Capshaw I said, "You don't get enough credit for it, but I think your performance in Temple of Doom is fantastic." I meant it then and I still mean it to this day.

In Temple of Doom Kate is playing Willie exactly as she's supposed to. It's what's on the page, it's the character type Spielberg and Lucas were going for. The whole point of Willie is that she's not Marion, just like the whole of Temple of Doom is intended to not simply retread the same tropes done in Raiders.

Those who complain the loudest about Willie Scott are often those whose film knowledge begins around 1977. They don't get the character type, but anybody who delves in the films of the '30s, not to mention the serials that the film directly nods to, will recognize the Willie Scott type. She's annoyingly pampered and completely out of place, but she can dish it out as good as any other gal when push comes to shove.

Nordling does a good job defending her below, but I will wrap up by saying that if you get the references to character tropes of the golden age of Hollywood and still hate Willie then the problem you have is with George, Steven, Willard Huyck and Gloria Katz, not with Kate Capshaw. She played that part exactly the way it was intended. She didn't take some magically brilliant, strong female character and turn her into a whiny wimp.

See, I get all worked up when I'm talking about her. Don't get me started on my defense of Short Round... I think the father/adopted son relationship between Indy and Short Round is just as poignant, if not moreso, than the real father/son story told in Last Crusade, but that's an agrument for another time. Now here's Nordling with his contribution to this series, which still has some great rare images and interviews coming up, so keep coming back for more, fellow true believers! 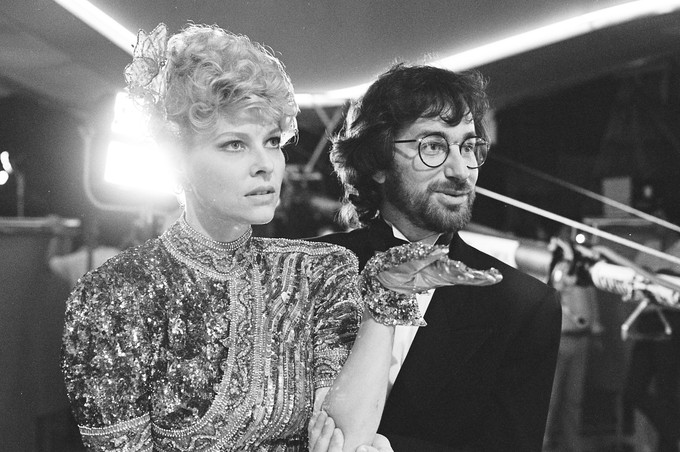 Boy, I'll take it on the chin for this one.

INDIANA JONES AND THE TEMPLE OF DOOM doesn't need defending. It comes from a great film tradition - the Saturday matinee, the serial adventure. I wish TEMPLE OF DOOM was edited in such a way that every cliffhanger played at the end of the reel and you'd have to wait a week to see the next installment. It's such a ride of a movie, and it never stops. Then, once Indiana goes to rescue the children, it REALLY never stops. It's one of the most relentless movies ever made.

I've long thought TEMPLE OF DOOM was a great movie. I remember coming out of it the first time in 1984 completely exhausted. Later, when the movie caused some people to cry foul at the violence and intensity, I felt like those people saw a different movie than I did. It was a rollercoaster ride, plain and simple.

And, on every rollercoaster ride, you get "The Screamer." It's probably someone sitting behind you, screaming wild fury in your ear, terrified but loving it all the same, and they are both annoying and a bit adorable at the same time. Everything that happens to them is an intense moment, and they react accordingly - over-the-top, but their reactions add flavor and, yeah, even a little excitement to the proceedings. That's Willie Scott to me.

She ain't Marion, that's for sure. She's also not Elsa - there's very little duplicity to Willie. Sure, she'll use her womanly ways to manipulate a situation, but that's the tools they gave her in 1935 and damn if she's not going to use them. She's a bit screwball, a bit fragile, and she's ill-equipped to handle the life-or-death situations that are a part of Indiana Jones' everyday life. But Willie's a survivor. She doesn't handle tough situations, perhaps, like other women in Indy's life, but she does handle them.

We also have to remember the context of INDIANA JONES AND THE TEMPLE OF DOOM. It's very much a period piece, in tone as well as in structure. Characters like Willie are all over the place in serial adventure films. The damsel in distress is everywhere, and it's our hero's job to pull them from the fire. Granted, Willie may cause a bit of... reluctance in our hero, but Indiana is a good man, for the most part, and he's not one to let people die needlessly.

Kate Capshaw is a very smart woman, and she's proven herself as a very capable actress in her films. So what makes Willie so... annoying to so many people? Because she's us. The Indiana Jones films are wall-to-wall adventure, full of educated and highly capable people who can handle themselves in a fight, or think themselves out of a bad situation. We may hate to admit it, but I have the feeling that if we were put in a situation, like crawling through a tunnel filled with vile bugs, we'd probably handle it like Willie did. Hell, I know I would - I hate insects. Because the events of TEMPLE OF DOOM are so over-the-top, her reactions are appropriate for the goings-on. I think Willie's tough in her own way, because as crazy as things get in TEMPLE OF DOOM, Willie does stick it out, bitching and moaning all the way, yes, but she handles it.

Plus, and not to sound like a misogynist jerk, but Willie's kinda hot. Yeah, I said it. The innuendo and sexual banter between Willie and Indiana feels decidedly old school, and it certainly gave my 14-year-old mind certain... thoughts. For younger audiences at the time, it was probably a lot of "Icky, gross, girls" moments but for me, helpless in the tidal waves of puberty, it was exciting stuff. Indiana Jones may be a tough guy, but he's also human. One of the funniest moments, for me, in TEMPLE OF DOOM is when Indiana feels up the statue's breasts to find the secret passage to the Temple of Doom, while Willie complains, "I'm right here!" There's a snappy banter to the dialogue, and Harrison Ford and Kate Capshaw seem to really be enjoying each other's skills as actors, and they make the flirtation feel real.

I love how Willie reacts to the palace dinner. It's hilarious as each plate comes out, more disgusting than the last. Is it a silly sequence? Oh yeah, but both Capshaw and Ke Huy Quan make it work. It's not supposed to make sense - it's all comedy, and their reactions are priceless.

And then, there's the opening musical number, which is Capshaw's best moment in the film. She brings us all into this incredible Busby Berkeley moment, and I still think Steven Spielberg needs to make a real musical before he stops making movies, because he'd be a natural at it. The ensuing fight in Club Obi-Wan wouldn't be half as fun without Willie scrambling to catch the diamond; again, like we all would be. The pacing of that sequence is incredible and so well orchestrated, and I think Capshaw's comedic talents add a lot to that.

Finally, the best reason to defend Willie Scott - Steven Spielberg ended up marrying Kate Capshaw, and they are still happily married today. Happiness is definitely not overrated, and Spielberg has given us so many great movies since INDIANA JONES AND THE TEMPLE OF DOOM. Behind every great man is a great wife, and I'd be very surprised indeed if Kate Capshaw wasn't somewhat responsible, in her way, for much of that.

I know that when it comes to my wife, I love her completely, and I couldn't do half the things I do without her. Real relationships are complementary, and because Steven Spielberg and Kate Capshaw met during the making of this still amazing film, I can't help but think that, over the years, as he bounced ideas off of her, as married and truly in love couples do, that many of those great movies came through because of the nature of their relationship. No artist works in a vacuum, no matter how they may say otherwise, and the love that these two have for each other informs Spielberg's work as any relationship would. Steven Spielberg has gotten even better as a director since INDIANA JONES AND THE TEMPLE OF DOOM, and there are many reasons for that - but primarily? He's a happy man. Happiness isn't overrated. True happiness is a rare gift, and Kate Capshaw has provided Spielberg with many years of that. All because of INDIANA JONES AND THE TEMPLE OF DOOM.