Fortune and Glory: Quint writes about the birth of Indiana Jones as we know him and why Temple of Doom is the best prequel ever made.

Ahoy, squirts! Quint here. Let me stop you before you angrily throw The Godfather Part II at me after reading my headline. Godfather 2 is a masterpiece, but it's not a prequel. It's a sequel with flashbacks. Big difference. Reboots don't count either. I saw someone refer to both Casino Royale and Batman Begins as prequels and I just made Frankenstein-like grunting hand gestures at my monitor for, like, three minutes.

The fact that most people don't know that Temple of Doom is a prequel to Raiders of the Lost Ark is one of the reasons it's at the top of the heap of that very specific category (filled by many not-good movies... looking your way Exorcist: The Beginning/Dominion). Temple of Doom may be a sneaky prequel but it is one.

There's an assertion that the only thing that makes Temple of Doom a prequel in any real sense is that a 1935 date is super-imposed on the beginning (Raiders takes place in 1936). Hate to burst that particular bubble, but whoever says that is clearly not paying attention.

When most people think about Indiana Jones there are a couple of quotes that go through their heads. “Trust me” is one, thanks in part to the teaser posters for Temple of Doom that urged us to “Trust Him.” Another is “It belongs in a museum.”

That's how Indiana Jones is at the start of Raiders of the Lost Ark, but that's not who he is at the beginning of Temple of Doom. He starts off the movie in a fancy white tux (ala Bond) trying to sell a significant archeological find in exchange for a massive diamond. He ain't trading for a better piece. He's trying to make a mint from a Shanghai gangster with a fetish for the remains of Chinese emperors.

When Indy figures out the sacred rock taken from the Indian village is likely a Sankara Stone he agrees to go after it because he wants fortune and glory. He's not setting out on this adventure because he's going to save this village. Hell no! The Indy that leaves that village wants the Sankara Stone for himself. He's arrogant and selfish. He's the man who broke Marion's heart. In short, he's Belloq.

Indy's arc in the film is to get him to the person he is when he explores that Peruvian temple in search of a fertility idol. Harrison Ford is so full of charm and swagger in Temple of Doom that people don't automatically notice he's a bit of a fucking asshole. He literally punches a lady (by accident, granted) during the first fight scene! It's the weirdest unsubtle character arc that nobody recognizes in the history of blockbuster filmmaking.

I don't see the creative forces behind the movie ever talking about that aspect. I'd say I'm reading things into the movie that aren't there, but they're so blatantly there I can't be.

I mean, there's literally a subplot all about bad guy Indiana Jones turning into good guy Indiana Jones in the movie. He's a straight up villain at the beginning of the last act who is brought back from the brink by his surrogate son and miniature body guard, Short Round.

Some of the reason people ignore this could be the ret-conning that went on in the opening of Last Crusade. As much as I loved River Phoenix as Young Indiana Jones that intro bugged me even as an 8 year old kid watching the opening night showing with my parents. I knew it didn't fit with what I had seen in Temple of Doom even if I couldn't articulate it at that time.

Indiana Jones as we know him was born in Temple of Doom. There's a small evolution from beginning to middle, but you can pinpoint the exact moment the Indiana Jones we all know and love takes over. After witnessing the unexplainable heart-ripping human sacrifice, Dr. Jones swings down to collect the three Sankara stones, leaving Willie and Short Round. He collects the stones and is about to return to his fellow adventurers when hears the anguished cries of a child.

He had his fortune and glory. Don't ask me how they could have gotten back out to Pankot Palace with the spike room closed up tight, but at the end the slave children seem to find a way out, so obviously there's another way back. The point is, he has what he wants, but when he sees the captive children something changes in him. I can see it on Ford's face as he looks down on the thuggee whipping the fallen slave child.

The moment he picks up the rock the Indiana Jones we all recognize is born. What's great about it is that Ford plays it like he lost control for a bit. He threw that rock without thinking. Indy looks surprised when it becomes clear his actions have consequences. Underneath the bravado and smugness beats the heart of a genuinely empathetic man.

That sentiment is further cemented when Indy is given yet another chance to escape with his friends and his fortune and glory after Short Round wakes him up from the Black Sleep of Kali. After nearly being french fried in lava Willie pleads for them to get out of there. Indy puts on his hat, whips dramatically towards camera and says, “Yeah, all of us.”

That leads us to one of the best shots in any of the Indiana Jones films, Raiders included: the mine cart lamp illuminating one of the most famous silhouettes in cinema history. The look on Indy's face is pure righteous anger. That's Indiana Jones. That's the man the world cheered for in Raiders of the Lost Ark. 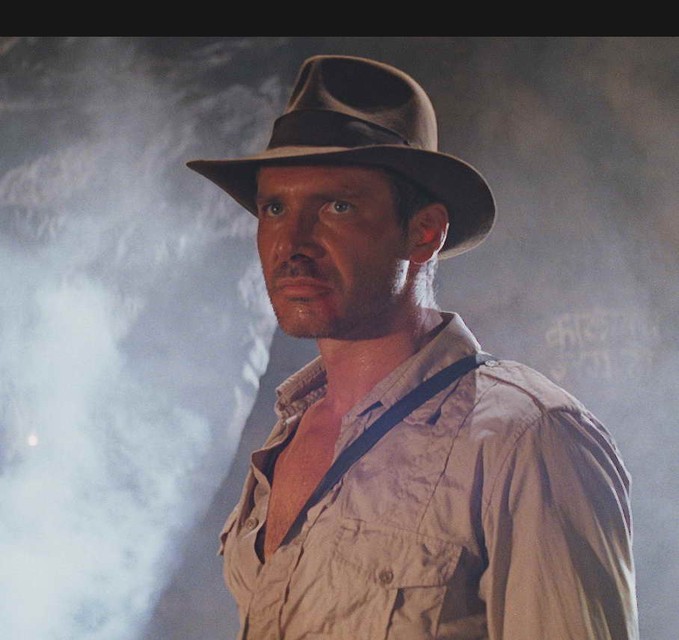 Belloq would later say he was but a shadowy reflection of Indiana Jones. What separates them is but a small sliver of empathy and selflessness that is earned in Temple of Doom. Would Belloq have thrown that rock to save a kidnapped child? I don't think he ever had that spark of humanity that Henry Jones Jr. does. Belloq was wholly obsessed with fortune and glory, so much so he'd work for a monster like Hitler knowing full well what the power of the ark could mean in his control just so he could be a real part of history.

Indy's evolution is the core reason why I believe Temple of Doom is the best prequel ever made and the fact that it worked nearly subliminally for most viewers is a bonus. Most prequels are obsessed with setting up every single aspect and piece of imagery from the first movie in a series, but this one only nods its fedora twice. First with Indy pausing in front of a snake statue and giving it the stink eye and then when he goes for his gun when confronted by two thuggee swordsmen. That particular beat is probably the most awkward moment in the movie. That scene is still easily explained by Indy not having any trouble bringing a gun to a sword fight being a character trait, but it's clear to anybody with eyes (and ears since John Williams repeats his score from that moment in Raiders) that was intended to call back to an audience favorite scene. What's even crazier is Spielberg calls back to a completely different iconic Harrison Ford moment the very next scene when he chases a thuggee away, only to turn tail and run, two dozen bad guys chasing after him. You know, exactly like when Han Solo chased the Stormtrooper into a room full of Stormtroopers in Star Wars.

That scene doesn't bug me like it does many people, but I mention it because it's really the only moment of typical prequelitis in the film.

When you consider that Temple of Doom leads you right up to the beginning of Raiders without rubbing your nose in it for two hours or being a photocopy of the first film I think you'll soon join me in declaring the film the best prequel ever made.

Or you'll call me a lunatic after reading all that. That's cool, too. But I'm right.

Now, I'm sure many of you will list other films that could qualify for best prequels and perhaps a few of them I overlooked in my haste to declare ToD the winner, but I think we can all agree that the second Indiana Jones installment isn't merely conveniently set pre-Raiders to figure out a way not to have Jones face down with Nazis again. Right?

Anyway, that's something I always wanted to talk about. Now I've done it. Keep your eyes peeled for more Fortune and Glory installments, including some guest essays, sweet rare imagery and a few more really cool interviews.