Norditorial - THE CLONE WARS Is Essential STAR WARS. I Was A Fool To Ignore Them. 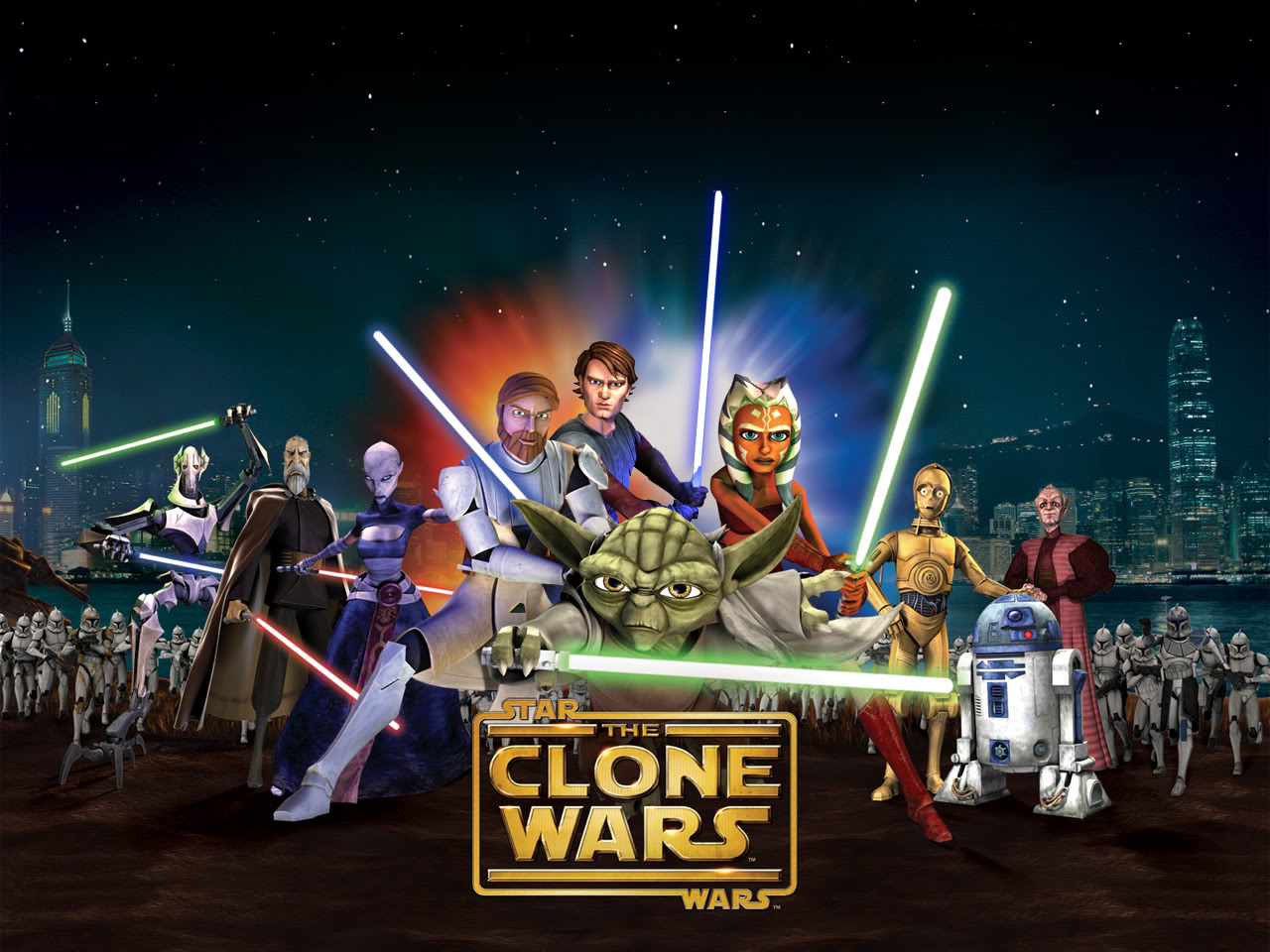 Warning: this gets REAL nerdy.

I resisted watching STAR WARS: THE CLONE WARS for so long.  First, I'd read reviews of that first movie, which were abysmal.  Ziro the Hutt is the worst character ever created in STAR WARS, and yeah, I'm including Jar Jar Binks in that assessment.  I'm not entirely sure what the writers intended with Ziro, a sort-of Truman Capote caricature that can lift right out of the series, but at least that story arc comes to a decent conclusion in THE CLONE WARS.  But for the most part?  The CLONE WARS movie's skippable.  We are introduced to some interesting characters, but if you dive right into the series, you'll learn all about those characters anyway. 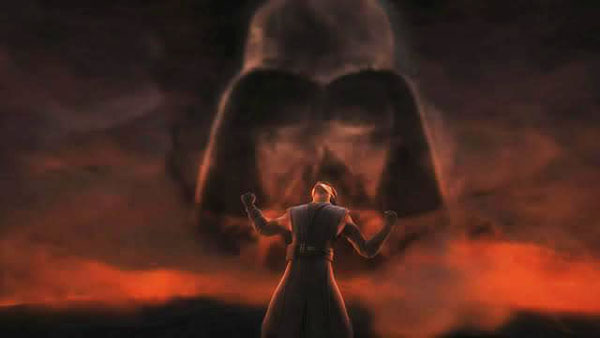 Second, I was hung up on my dislike of the Prequels.  I still don't think that, as movies, they are very good.  But I now understand, in a broader sense, why that is.  There is scope to the Prequels, and even in a larger thematic sense, I can see what George Lucas was trying to do.  Without comment, or any kind of editorial judgment, Lucas was opening up his universe in a way that, perhaps, audiences weren't ready for.  The stories of the Original Trilogy, as good as they are, are simple.  Boy saves girl, boy learns of his destiny, man saves galaxy.  The Prequels are harder.  Why did Anakin fall?  There's a myriad of reasons, but in watching THE CLONE WARS, I understand now that he was always doomed.  Anakin never really had a chance.  He was manipulated by forces well beyond his control.  Anakin was not a perfect person - quick to anger, too eager to jump into battle without assessing the larger picture.  He was a passionate man, full of love for Padmé, but bound by the Jedi Order and unable to leave it.

Lucas, in broad strokes, paints the Jedi as an order who could not sense what was coming, and their obsolescent ways kept them from changing when the times required them to.  They became trapped in a system of corruption and malaise, and were unable to break free, held in the grip of the Clone Wars.  Palpatine, at all times, had the Jedi right where he wanted them.  The politics of STAR WARS was too big, too intricate for three movies to fully dive into, and so the Prequels felt bogged down whenever the movies tried to explain the intergalactic shifts in power, and Lucas was unable to present these essential plot points without simply making it a bunch of people in a room talking.  When it comes to expansive storytelling, George Lucas can be right on the money.  It's when he has to have the audience look under the hood, to examine the small, moving parts that make up his story, that Lucas falls short.

I used to be angry about that, but not any more.  We all wanted to see the Prequels, we all wanted to see why Anakin became Darth Vader, and we all had ideas in our head about how that came to be.  What Lucas showed us was perhaps far more complicated than we realized, and something that couldn't really be shown to us in full with three movies.  Lucas trapped himself when he decided to tell this story; to be blunt, STAR WARS got away from him, and he didn't have the skills to rein it all in and make it all make sense in a larger, thematic way.  And, to be fair, very few filmmakers could.  It's a LOT of story.

STAR WARS: THE CLONE WARS then, has the luxury of time to dive into the abstruse plot strands that Lucas was attempting. Having seen the entire series, it feels like that was what was intended all along, so completely does the series fall into that gap between the second and third films.  Does it absolve Lucas?  Well, not really, but it's not entirely his fault, either; it just got too big to tell in a movie.  What STAR WARS THE CLONE WARS does on its most basic level is to make the Prequels better.  I can't imagine watching them now without all the new plot and thematic information that THE CLONE WARS provides.  Every character is changed - not only Anakin Skywalker, but Yoda, Mace Windu, Obi-Wan Kenobi, even the clone army.  It turns REVENGE OF THE SITH into the tragedy that it was always supposed to be.

I've never liked the idea of prequels - if you know the characters' fates, where's the surprise, where's the tension?  It's akin to laying down the color-by-numbers diagram on a painting that's already complete.  What prequels can do is to make the moments we know about resonate deeper.    But in the larger scheme of storytelling, prequels are trapped.  Instead, they can only inform what we've seen, and it frustrates because even while prequels go into the whys and hows, they don't change anything. They can't.  The writers of STAR WARS: THE CLONE WARS know this, and so instead of creating tension where there cannot be any (none of the characters we are familiar with are going to die, and we know that), they create a deeper examination for us to understand, and expand the Prequels in ways we did not expect.

Take Ashoka Tano, Anakin Skywalker's Padawan.  In the early episodes of THE CLONE WARS, and in the movie, she doesn't seem to have a point, plotwise or thematically.  At first, I thought she was yet another annoying character created by people who didn't understand STAR WARS. But I was completely, utterly wrong about that.  As the series progresses, Ashoka becomes our guide, our surrogate, and she grows in ways that I did not anticipate.  In her final story arc of the series, she is a hero as tall in stature as Luke Skywalker and Han Solo, in my eyes.  Her final moments with Anakin actually moved me emotionally in a way that the Prequels never did, and I was wiping tears from my eyes.  (Yeah, I'm sentimental like that.)  All of it services the Prequels, and makes them resonate.  Does that excuse the shoddy nature of the Prequels?  Not at all.  As a critic, they are still badly made movies.  As a STAR WARS fan, though, the Prequels become the mortar that fills the gaps, and the bricks are STAR WARS: THE CLONE WARS. 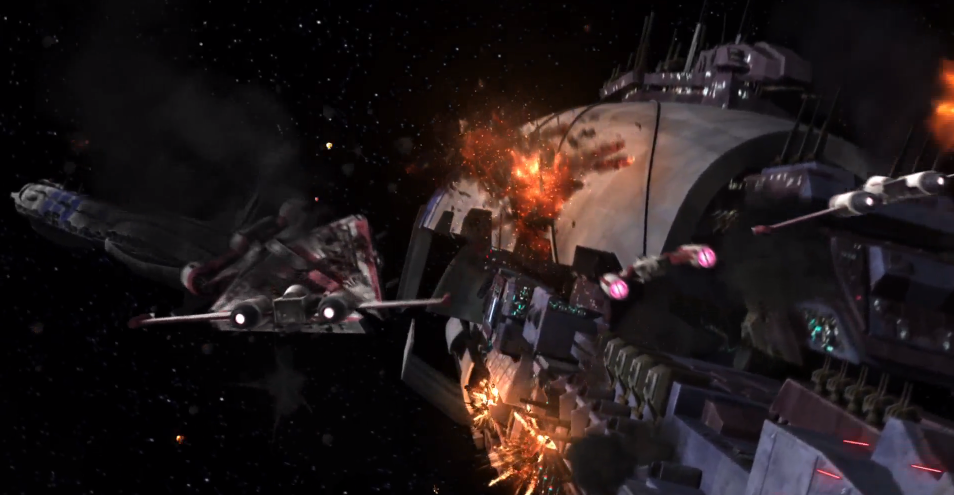 Season 6 of THE CLONE WARS, exclusively on Netflix, brings it all to an end in such a satisfying way that after finishing them viewers will want to dive into REVENGE OF THE SITH right away, perhaps seeing the movie with new eyes.  Fans might be tempted to skip the preceding 5 seasons but I would advise against that strongly, because those seasons build onto our established understanding of these characters.  Obi-Wan Kenobi's past is built upon in THE CLONE WARS and we learn that he had very much the same struggles that Anakin did.  Those Jedi we saw all too briefly in REVENGE OF THE SITH are given expansive backstories.  R2-D2 has a story arc that confirms him as the ultimate badass of the entire Saga.  Even Jar Jar Binks grows as a character.  I'm still not a fan, but I don't outright hate him anymore, since one of the best episodes of the series involves him, and a STAR WARS retelling of the great Akira Kurosawa film KAGEMUSHA.  It's wonderful.

There are a ton of Kurosawa riffs in THE CLONE WARS.  There's even a two-parter Godzilla tribute episode.  There's political intrigue, action, conspiracy, romance, comedy, and tragedy.  The villainous plot of Darth Sidious, as it grows in complexity, shows us all the strings, and everyone is a puppet who has no idea of Palpatine's political and spiritual manipulations.  Even when one of the clones discovers the truth (and that series of episodes in Season 6 is truly tragic and heartbreaking) and we know the larger patterns, we still feel the loss.  The clone characters, by the way, are really well done, and accentuate what happens in REVENGE OF THE SITH even more.

The final four episodes of Season 6 involve Yoda, and that story is one of the finest STAR WARS stories in the Saga - Yoda is tested spiritually as he comes to realize the vast scope of the Clone Wars and the machinations of Darth Sidious, and he begins to suspect that the Jedi will not win.  They are sweeping, grand episodes, and everything I love about STAR WARS.  It would make a fine, fine movie.  I have to congratulate series frontrunner Dave Filoni on being able to gather all these great stories together and making them part of a larger whole, and making this series the very best the Prequels have to offer.  The writers, voice actors, the animators, the artists all involved with THE CLONE WARS should be incredibly proud of what they have accomplished, and it's perhaps the best example artistically of making a silk purse out of a sow's ear that I can think of.

If you don't like STAR WARS, THE CLONE WARS won't change your mind.  If you do, this series is essential viewing, and takes its rightful place in the Saga.  If STAR WARS: REBELS is as good - damn.  It's a great time to be a STAR WARS fan.  Enjoy it.  I know I will.