Quint talks with John Carpenter about Snake Plissken, Robert Rodriguez, El Rey and how he almost worked on Grindhouse!

Ahoy, squirts! Quint here taking a break from my LA adventure to post up a quick chat with one of the most beloved directors of my generation: Mr. John Carpenter. You know, no big deal.

I got a chance to chat with the man in support of his appearance with Robert Rodriguez on a new series on Rodriguez's own El Rey Network called The Director's Chair in which two directors will sit and discuss their work. El Rey is also running a marathon of three very interesting films from Carpenter's filmography: The Fog, Assault on Precinct 13 and Escape From New York. (It's happening right now, so flip over asap!)

I only had 15 minutes with John, so I thought it best to focus on the three films showing on El Rey and his relationship with Robert. We do cover a lot of ground, including discussing the connection between Assault on Precinct 13 and Escape From New York and a near miss that almost had Carpenter contributing something very interesting to Grindhouse.

So, here it is. My nerdy chat with John Carpenter. Enjoy! 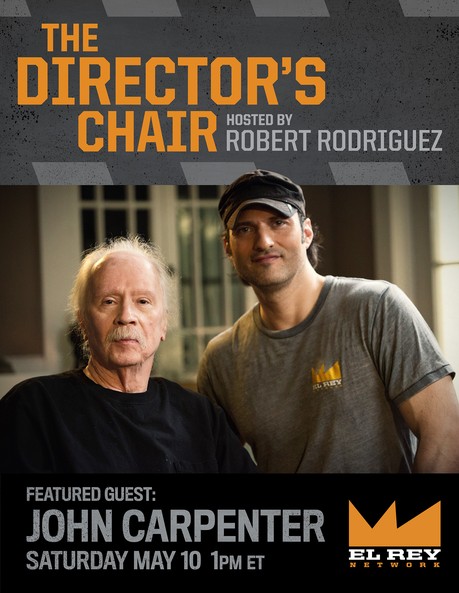 John Carpenter: It's good. How're you?

Quint: I'm doing fantastic. Thanks a bunch for talking me today. I really appreciate it.

Quint: Before we start talking about this thing you're doing with El Rey, I know that you're a gamer, so I wanted to hear what you thought of Titanfall.

John Carpenter: It's a multiplayer. Okay... I'm not going to go online with a bunch of kids and get my ass kicked! I want to play a campaign and they don't have one, so I bought it, stupidly, without thinking about it, but I'm sitting here playing old games until a new one comes out. But I have not played Titanfall.

Quint: I'm not a big multiplayer fan, either. I think it was around the Call of Duty era where it just became about finding all the little secret hiding spots and tricks.

John Carpenter: Yeah, everybody but me!

Quint: The secret to Titanfall is to have a group of friends that you like playing with and then it doesn't matter if your sucking or not.

John Carpenter: Yeah, that's true. I haven't tried that yet. If I ever get a group who wants to play I'll do it.

Quint: I think this thing that you did with Robert Rodriguez is really cool. I'm a big fan of when directors get together and talk about their craft and their work. Famously, there was the Hitchcock/Truffaut interview. It's much more different than, say, you and me talking about your work. You guys can engage on a completely different level. Is that what attracted you to the offer when Robert came to you about this?

John Carpenter: Yeah, it was. It was. I've known Robert for a long time. I'm a fan of his talent. He's enormously talented and a very, very nice man. We share a lot of directing stories in common, but more impressively Robert has become a tycoon. He's the new Oprah! When he explained to me what he was doing I was really impressed. I thought, “Oh, man! You're smart. Why didn't I do that when I was younger?” (laughs) I guess I wanted to get a little smarts from him.

Quint: Is the interview kind of a freeform thing or do you focus on the three films of yours that El Rey is running?

John Carpenter: Both. He wanted to talk about the movie's I've made and, of course, he wanted to pimp the ones that'll be on his network. We talked about both. We just generally talked about directing in a freeflowing conversation. He had some questions, but it was interesting... when I was talking to him all of a sudden I started remembering things I had forgotten. Names and places and specifics. It was great. I loved it. He's just a great guy.

Quint: Robert is a legit cinephile. His enthusiasm is contagious. You can't help but get pumped up when you talk to him about stuff he's passionate about. Did Robert pick the lineup of your films or was it your choice to feature Assault on Precinct 13, The Fog and Escape From New York?

John Carpenter: He picked it.

Quint: I think it's a really interesting sampling of your work. There might be a lot of Halloween and The Thing fans that might have seen Assault on Precinct 13 and that's one of my favorite films of yours. 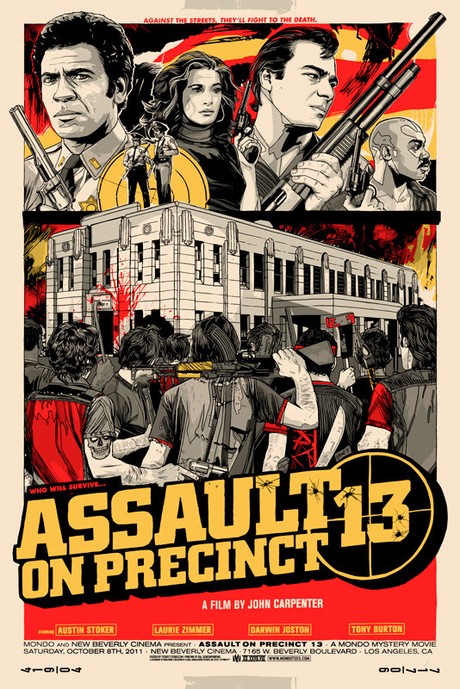 Quint: What I love about that movie is that it feels like you have something to prove. When I watch it I get the sense that you're hungry to tell a particular story and isn't concerned with normal conventions of cinema. I mean, you start off killing a kid!

Quint: It also looked like you went out of your way to be cinematic. Obviously in the 2.35 aspect ratio, but also in how you filled the frame and composed your shots. I feel like a lot of young independent filmmakers forgo the look of cinema these days and are just focused on getting their story told. The art part of it gets lost a bit these days.

John Carpenter: You have to carry that along no matter how rushed you are. That has to be the basis. I think, anyway. 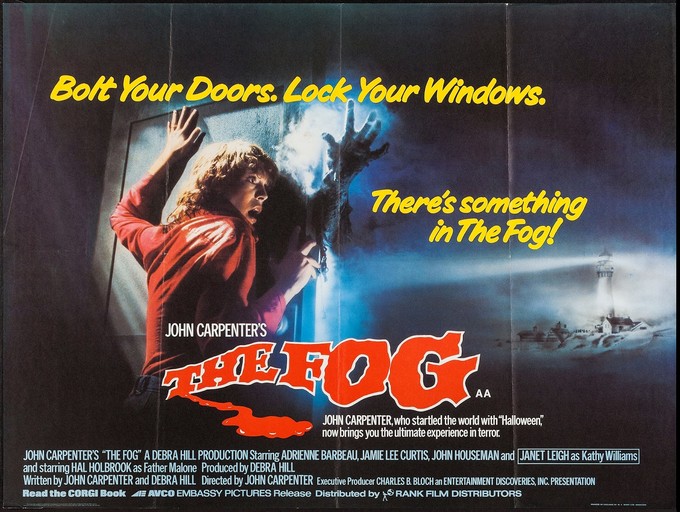 Quint: The Fog is another title that's playing in this marathon. That's another interesting pick. I'm a big fan of when a filmmaker with a distinct voice changes things up from movie to movie. You followed up Halloween with The Fog and you couldn't get a more different movie, tonally or storywise, but your voice is just as strong. I love it when filmmakers do that. It's one of the reasons I'm one of the few nerds that actually really loved what you guys were trying to do with Halloween III. So, was that something you thought about going into The Fog?

John Carpenter: Oh, hell yeah, but a lot of people didn't see it that way. They thought, “He's doing the same old stuff.”

John Carpenter: Oh yeah. They expected me to move on through the genre to other things. That's what they expect.

Quint: Anybody who pays attention to your career can see that you don't like repeating yourself. There's nothing that you've done that would hint at Big Trouble In Little China, for instance.

John Carpenter: (Laughs) I know. Nothing that nobody has done, I agree.

Quint: Big Trouble is easily in top favorite movies of all time for exactly that reason. There's nothing like it. I don't know how you hit that tone... it's like you mixed up screwball comedies with '70s Chop Socky and Big Trouble came out.

John Carpenter: You got it, yes! That was fun. That was a fun movie to make.

Quint: I recently had a chance to talk with Kurt Russell about his career (read that interview here) and he told me a story about the first screening of Big Trouble for the studio, where the exec stood up and said, “I don't get it. Kurt's character isn't very good at what he does...”

Quint: He was laughing talking about it, but I'm sure you guys weren't laughing at the time.

John Carpenter: No, it was grim. That was grim. But, hey. That's in the past. Why relive the pain now?

Quint: When I was talking with Kurt, I made an unwitting mistake. I offhandedly referred to Snake Plissken as a dick and he very quickly corrected me on that.

John Carpenter: I'm sure he did!

Quint: He jumped in immediately with a “Wait a minute, Snake is an asshole, he's not a dick!”

John Carpenter: There you go.

Quint: Snake is one of my favorite examples of a leading man anti-hero, so can we talk a little bit about how you guys created the very not dick-ish asshole that everybody still loves to this day? 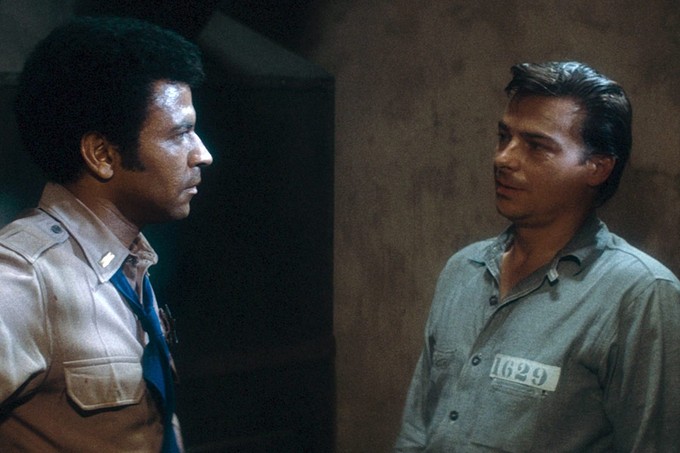 John Carpenter: (laughs) Look, Snake Plissken is a direct descendant of Napoleon Wilson from Assault on Precinct 13. He's cut from the same cloth. They are a combination of people. One is a guy I went to high school with who had a lot of the same characteristics and my own alter-ego. You combine my own alter-ego and this guy I knew then you get Snake Plissken. We added a bit of absurd romance to him. What's under that eyepatch? How did he get it? What has he been doing? Who is he really? We made him a mysterious character. So mysterious he was kind of a Man With No Name, an immitation of Eastwood.

Quint: That's further underlined by your casting of the great Lee Van Cleef.

John Carpenter: He was an actor in a whole lot of movies in his career. When I cast him I didn't think Western, I just thought he had a great face. He's always had a great face. The Western stuff was sort of secondary to be honest with you. I remember him from the real old days. Beast From 20,000 Fathoms and It Conquered The World and things like that.

The first question I asked him was, “How was it working on It Conquered The World?” He said, “I had trouble with that picture.” He was an interesting fella. Interesting guy.

Quint: You also needed someone strong to stand up to someone like Snake.

John Carpenter: Oh yeah. He also had a career of playing bad guys. He could play this really tough commander with ease. It was great. 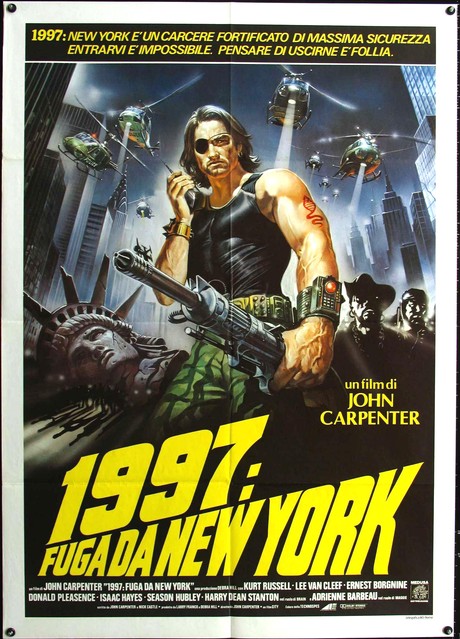 Quint: Since you're buddies with Robert Rodriguez do you think you're going to come out to Austin at some point and work on something with him for El Rey?

John Carpenter: If he asks me. The last time Robert asked me to do something, he asked me to compose the music for Grindhouse. Then I never heard from him again!

Quint: Wow, that would have been perfect! Would you have done it?

John Carpenter: I was interested, but he didn't call me back! I was busy at the time and I said, “Just give me another week or so and I'll be available.” Then I never heard from him. I brought that up to him and he claims they cut his budget. Right, right, right. (laughs)

Quint: If you come out to Austin I have some good BBQ recommendations.

Quint: We have some of the best in the world out there.

Quint: He's doing great. He's still in physical therapy. He had surgery on his back to fix some loose connections back there and now it's just about building up the muscles and teaching his legs to walk again.

John Carpenter: Great. Good for him.

Quint: We're doing great out in Austin, so come on out and we'll treat you well.

John Carpenter: Well, I'm not going to come out until someone invites me, dude!

Quint: I will make that happen, then!

John Carpenter: You have Robert Rodriguez invite me to do something. Have him call me back! (laughs)

Quint: Thanks a bunch for talking with me, man.

John Carpenter: Alright, this has been fun! 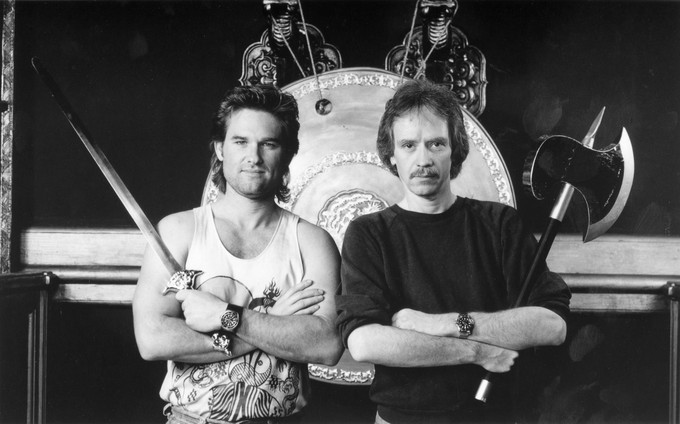 Robert, get John Carpenter to Austin! There, I think that's all I needed to do to make that happen. That's how the internet works, right?

Hope you guys enjoyed the chat. Definitely check out El Rey's director's series (which begins today) and no matter what if you haven't seen either Assault on Precinct 13 or The Fog then you have no excuse not to fix that as they roll out on the network this afternoon.