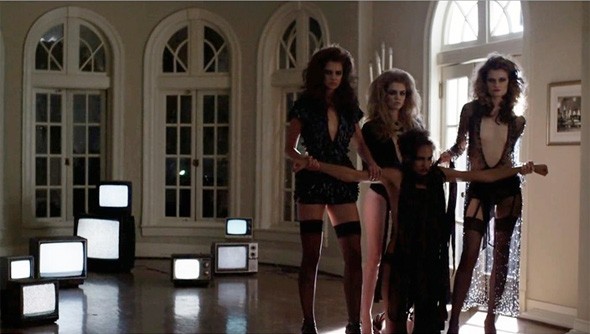 Despite a limited rollout in theaters and VOD, V/H/S/2 (also known as S-V/H/S) made a strong impression on horror fans, many of whom said they preferred it to the original anthology scare-fest. The series has proven a great venue for both established talents like Ti West and Eduardo Sanchez and up-and-comers like Gareth Evans, Adam Wingard, and Jason Eisener, and we now have the lineup of directors for the next entry in the franchise, V/H/S/ VIRAL. On top of premiering the "first look" image above, ScreenDaily announced the names, along with the new "premise" (which, true to the franchise, will only be loosely-applied), involving "fame-obsessed teens who unwittingly become stars of the next internet sensation." My guess is that this will be the wrap-around story, instead of the pilfering-through-cassettes bookends of the last two pictures.

Anyway, the directors are: Todd Lincoln (THE APPARITION), Nacho Vigalondo (TIMECRIMES, OPEN WINDOWS), Marcel Sarmiento (DEADGIRL), Gregg Bishop (THE OTHER SIDE, DANCE OF THE DEAD), Justin Benson and Aaron Moorhead (RESOLUTION). Presuming Benson and Moorhead will once again co-direct, this matches V/H/S/2's chapter count of 5, down from the first film's 6.

While they don't have anyone in there that got me as immediately excited as West and Evans' participation in the last two V/H/S's, this is an impressive roster of indie-horror talent. Vigalondo, who got great reviews for TIMECRIMES and is currently scoring a bunch more for OPEN WINDOWS, is probably the biggest name on this list, but the lesser-known indie directors should acquit themselves nicely to the smaller-scale scares that the found-footage genre leans towards. If nothing else, this will be arguably the widest showcase for their talents thus far, so hopefully, they can step up to the plate and plant themselves firmly in the minds of horror aficionados both here and abroad.

What do you guys think? Which of these directors gets you the most excited? Which director(s) do you wish they got who isn't listed here?