Mark Hamill sighted in shape and in London. Wonder why that'd be...

Ahoy, squirts! Quint here. Peter Serafinowicz is a lovely man. He's not only a super funny writer and actor, but he's also a very nice guy in person. If you've never had the pleasure of meeting him you don't have to take my word for it because he has delivered us a nice geek gift via his twitter account today.

Below you'll see a current photo of Mark Hamill, who has obviously been getting in shape for his still somehow unofficial yet totally official return to the role of Luke Skywalker for JJ Abrams' Star Wars Episode VII. Serafinowicz's tweet read “Met up with @HamillHimself in London today. I wonder why he's here.”

Let's overlook the geek factor of Darth Maul's voice tweeting a photo of himself with Luke Skywalker and see just how much work Hamill has done to get in shape. 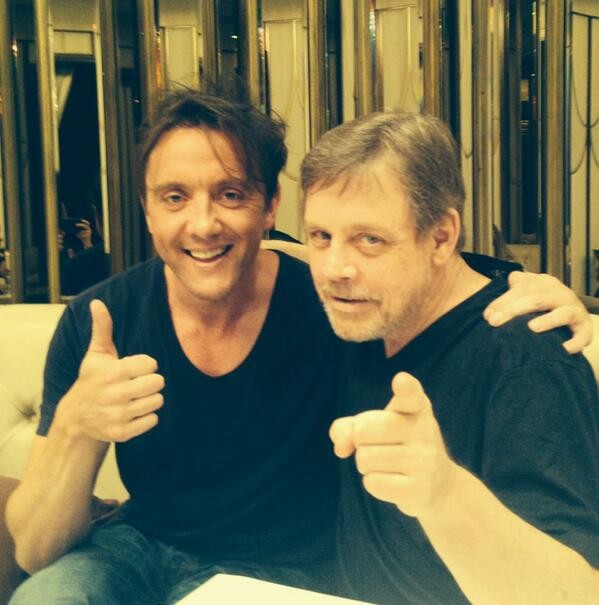 He's not cut or anything, but Luke never was that kind of guy anyway. To put some perspective on how much he's lost, check out this photo which I took at last year's May 4th anniversary screening of Return of the Jedi thrown by Hero Complex in LA: 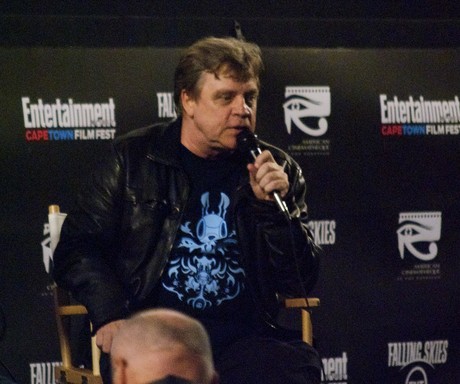 Less than a year later and I'd say Hamill's dropped an easy 60 pounds. Plus he's got some scruff going on... The beginnings of a Jedi Master beard or just a guy like all of us who always puts off shaving until he absolutely has to?

I know some folks decried Abrams' decision to include the older cast more than previously planned, but the above picture only solidifies my stance that if you're going to choose to do Episodes 7, 8 and 9 then I want to see Han, Luke and Leia, not their kids.

My instinct upon announcement of the new trilogy was that doing yet more Skywalker stories was less interesting than doing a whole new series with new characters, but if they are bound and determined to do that then I don't want the old guard to be cameos. So, I may be the only person Abrams pleases by increasing the amount of screen time they're getting, but if it was my call I woulda done the same thing.

Thoughts? We got May the 4th coming up soon. Word 'round the block is we'll be getting some big official announcements about the new films then. Stay tuned.