Here’s a look at the long in development MAD MAXverse game we’ve recently told you about & seen precious little from thus far.  There's also some information here about how to see a real-life version of Max's in-game vehicle.

A press release tells us a bit more…

Survive The Wasteland and customize the ultimate combat vehicle to overtake even the fiercest enemy.

The trailer will be premiering on TV via West Coast Customs on Sunday, April 27 at 7 p.m. PDT on FOX Sports 2, following the debut of the Magnum Opus, Max’s in-game vehicle.

The real-life version of the Magnum Opus was designed with the West Coast Customs automotive specialists and features a high-performance engine, killer tires, a suspension system built to handle the Wasteland terrain and much more. Check out the included one-sheet to learn all about the West Coast Customs vehicle build-out and how the real-life Magnum Opus vehicle showcases some key Players’ in-game options.

Set to release in 2015, Mad Max delivers open world gameplay in a post-apocalyptic setting where cars are the key to survival. Developed by Avalanche Studios, gamers become Mad Max, a lone warrior who must fight to stay alive in The Wasteland, using vicious on-ground and vehicular combat against savage gangs of bandits. Following the theft of his iconic Interceptor, Max must align himself with a gifted, but peculiar, mechanic named Chumbucket and others to build the ultimate war vehicle as he works to escape from the dangerous Wasteland.

— With a heavy duty grill, the player will deal massive damage when ramming enemies, but will also be able to break through tougher gates and constructions.

— Improved transmission and exhaust systems increase the maximum speed of the Magnum Opus.

— High quality suspension not only improves the player’s off-road capabilities, it also counterbalances added weight put on by armor and a powerful engine.

— Differently threaded tires define the player as a driver. Does the gamer want maximum performance on the tarmac roads of Dead Barrens, or in the off-road sandy dunes of the Great White?

— If the player lacks confidence in their combat ability, some added rail guards or armor frames are their best friends, soaking up damage from enemies and terrain alike.

— Is the player stunted by that gaping hole in the highway preventing them from getting to all the goodies on the other side? A better engine would provide the acceleration they need to make that jump.

— Vehicular combat in The Wasteland is neither pretty nor fair. A pair of shredder rims on the player’s wheels will improve grinding damage and give them the advantage.

— Adding a nitrous boost system for the gamer’s car will let them quickly catch up with their prey, or pack that final punch to send enemies flying as the player rams them.

— The Wasteland marauders will sometimes throw themselves through the air and board the gamer’s car. Some well-placed protective spikes will keep them off.

— The harpoon is the most versatile tool. Players can use it to pull off tires, doors and to pull out drivers. If properly upgraded, gamers can even rip away armor plates or pull down watch towers and massive gates.

"If the player lacks confidence in their combat ability..." - there I am.  Bring on that armor frame.   Here are a few shots of that Magnum Opus vehicle... 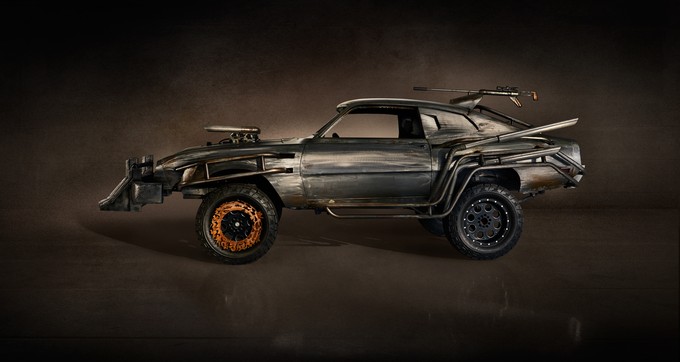 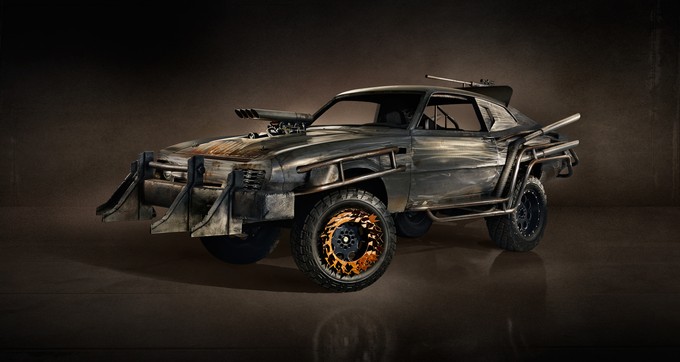 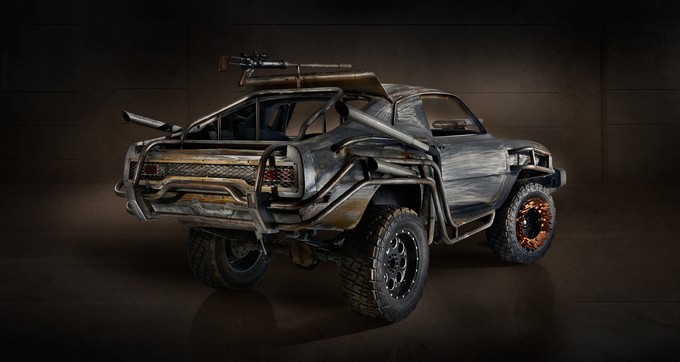 The game features a character named Chumbucket - which may make it the finest game ever, ever created.  More on the game, which will release on PC, PS3, PS4, XBOX 360 and XBOX ONE,  soon!