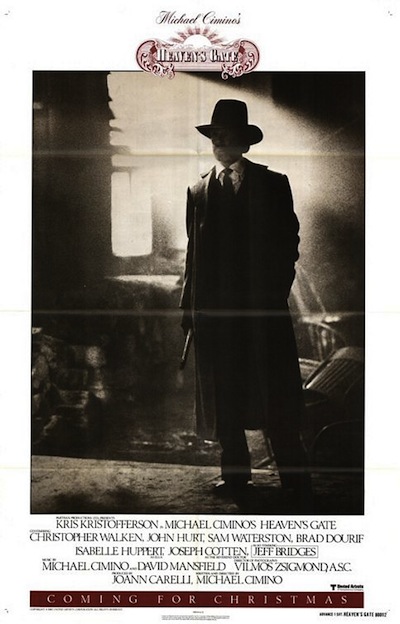 "I acknowledge that what I have done with this film is both immoral and illegal."

Steven Soderbergh possesses one of the most brilliant editorial minds in modern cinema. His films rarely contain an ounce of fat, while his colleagues frequently request his assistance in cutting down and clarifying movies that have gotten away from them for one reason or another (most recently, he helped Spike Jonze tidy up his masterpiece HER). He also loves writing about editing on his blog Extension 765, providing incisive insight on films as disparate as CHINATOWN and ON HER MAJESTY'S SECRET SERVICE (which, not so coincidenally, was the directorial debut of editor Peter R. Hunt). It is clearly a consuming passion for him. And that passion has prompted him to do something utterly insane: he's chopped down Michael Cimino's HEAVEN'S GATE to 108 minutes.

I haven't had time to watch this whole nutty exercise (subtitled "The Butcher's Cut"), but I love his brash decision to skip the entire Harvard sequence and start on the crane shot of the settler carving up stolen cattle. I have no idea if Cimino's film can withstand a 219-minute to 108-minute truncation (it certainly didn't work at 149 minutes when rereleased in 1981), but I'm excited to see what Soderbergh has come up with.

If you have never seen HEAVEN'S GATE, find the restored cut and watch that first. This version of the film might not make a whole lot of sense if you don't know what's missing (after being obsessed with the film for twenty-seven years, Soderbergh completed this edit while on holiday break in 2006). Or maybe it will make sense, further cementing Soderbergh's reputation as an editorial virtuoso.

The video cannot be embedded, so you'll have to visit Soderbergh's site to watch the movie.