Will we be seeing Doombots in Josh Trank's FANTASTIC FOUR?! 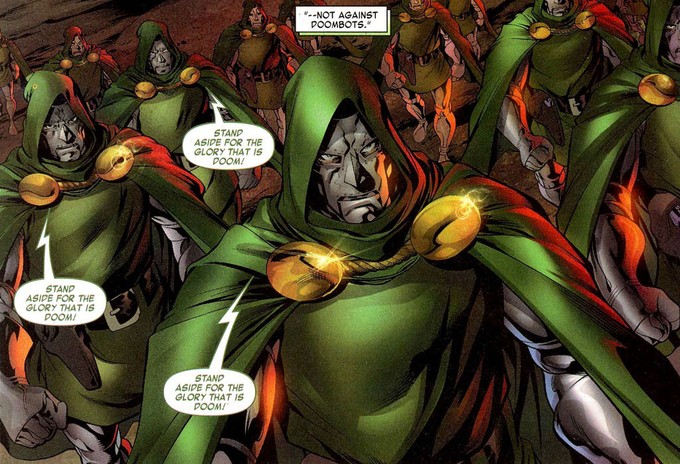 It's been like 5 minutes since we found out who will be playing Doctor Doom in Josh Trank's FANTASTIC FOUR, but a rumor has popped up that claims that there won't be only one version of the Latverian megalomaniac in the film. Nerdist purports that Doombots will appear in the F4 reboot.

For the initiated, Doombots are Doctor Doom's personal army of identical robotic clones. They simultaneously serve as bodyguards, attack dogs, and, most obviously, doppelgangers to throw off his enemies. He controls their behavior (initially, at least), and installs self-destruct mechanisms in each of them in case they go haywire or mutinous. So the answer to the question of "What's a bigger threat to the F4 than Doctor Doom?" turns out to be, "A shit load of Doctor Dooms."

Nerdist claims their sources are reliable, but the thing that convinces me there may be something to this rumor is the parallels it would create with drone technology. It remains a hot button issue, and ROBOCOP recently showed there's a way to synthesize the current fears about drones with mass entertainment, so I could easily see F4 taking a similar route. Let's just hope the social commentary isn't shoved front and center, with Trank & co. getting all preachy on us when we just want to see our beloved characters done justice for the first time on celluloid.

If this turns out to be true, one thing's for sure: this Doom is going to be closer to his comic book origins than any big-screen incarnation we've seen thus far. This ain't no peeved businessman, but a maniacal genius bent on world domination. Fuuuuuck yeah.