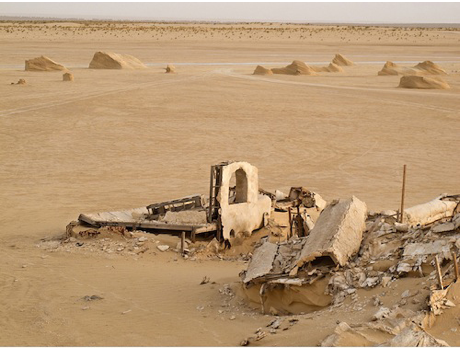 The above picture is of one of the abandoned sets still kinda standing from the Tunisian shoot of STAR WARS: EPISODE IV - A NEW HOPE. According to Badass Digest's Devin Faraci, J.J. Abrams and company could be headed back there next month.

Citing a source he trusts implicitly, Faraci is reporting that STAR WARS: EPISODE VII will begin shooting May 14th on location in Morocco. Given the plenitude of desert in the North African country, this would suggest that a return trip to Tatooine is in the offing. There's no solid word yet on whether the production will also hit Tunisia, but Faraci seems to think it's a distinct possibility. Even if they don't, I dig the idea of cinematographer Dan Mindel getting to shoot 35mm in the same country where David Lean staged the massacre of the Turkish army in LAWRENCE OF ARABIA. Ridley Scott has also been a fan of shooting in Morocco lately, and he's got a pretty decent eye for visual splendor.

Of course, we still don't know for sure who's starring in the damn thing. There's been no official confirmation of Adam Driver allegedly being cast as the villain, or the taken-for-granted involvement of Mark Hamill and Carrie Fisher. Fans are now speculating that there will be a great big news dump on May 4th (aka Star Wars Day), but that seems way too cute to me. I just don't think they can keep things under wraps for another month. Then again, they've gone this far without spilling the beans, so we'll see.

We do know that Abrams and Lawrence Kasdan have a finished script, which is always helpful. EPISODE VII hits theaters worldwide on December 18, 2015.