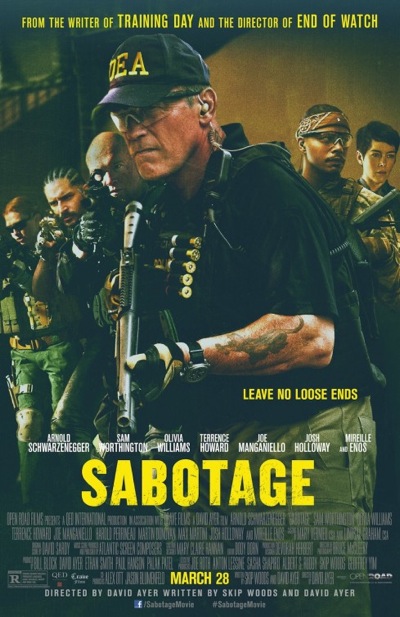 Six hours prior to my interview with Arnold Schwarzenegger, the earth shook. It wasn't anything serious, just a 4.4 centered a few miles away, but it was a good enough rumble to get you out of bed and started on your day. It was also the kind of absurdly minor inconvenience that would dominate Los Angeles small talk for the next twenty-four hours - i.e. the exact topic every interviewer would be using as a lazy ice-breaker with the Austrian-born movie star at the SABOTAGE press day. I was determined not to be that guy.

And so, upon entering Schwarzenegger's room at the Beverly Hills Four Seasons, I shook the former Governor's hand, sat down across a coffee table and asked him if he enjoyed the goddamn earthquake.

"Yeah. It's the only action I got this morning."

Of course he had a quip ready, and of course he punctuated it with that obligatory chuckle. This is how the man became one of the biggest movie stars on the planet: he gives you the Arnold Schwarzenegger you expect. And this is interesting because this is not the Arnold Schwarzenegger David Ayer gives us in SABOTAGE. The character of John "Breacher" Wharton is a good man gone corrupt in response to the kidnapping and brutal execution of his wife and kid by a Mexican drug cartel (it wasn't enough to take the man's family; they also had to send a videotape and souvenirs). If life is this cheap, Breacher and the crack DEA strike force he commands are going to get rich stealing from the cartel, which we see them doing in the film's first action sequence. But that bit of business goes disastrously awry: someone absconds with the money, and subsequently starts picking off Breacher's team one-by-one.

While Schwarzenegger plays the top dog in SABOTAGE, his Breacher is a conflicted, emotionally hollowed-out human being; we like him, but we don't really trust him. It's also striking how Schwarznegger allows himself to be physically overwhelmed in the frame at times; there's a moment when he goes nose-to-nose with Joe Manganiello, and we have no doubt who would come out on the better end of that confrontation. After years of being the perfect physical specimen or the unstoppable killing machine, Schwarzenegger is playing his age and acknowledging that there are younger guys out there who could probably take him down. Maybe. But not without a fight.

If Schwarzenegger is going to toy with his image in this phase of his career, he's going to be in phenomenal physical shape while he does it. Clad in a leather jacket with a button-down shirt tucked tightly into a charmingly-worn pair of blue jeans, it's clear that the man is still chiseled. The big-screen Schwarzenegger may show cracks, but the real-life version is going to match our lofty expectations and then some. Again, that's part of the package.

Throughout our fourteen-minute chat, Schwarzenegger was charismatic, quick to praise his collaborators, open to all queries, but reflective only to a point. The critics can look back all they want, but he is a man perpetually moving forward. 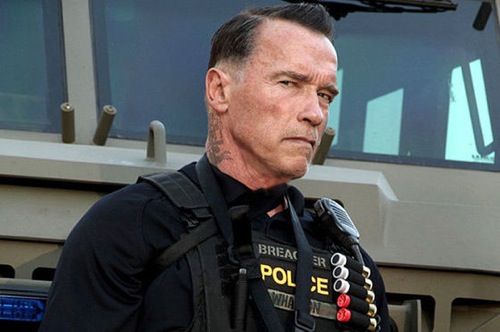 Jeremy Smith: Watching this film reminded me how movie stars like Clint Eastwood and even John Wayne reworked their image as they got on in their careers. They played with the iconography they'd established. Is that something you're interested in doing?

Arnold Schwarzenegger: We all try to improve. I have different parts and more challenging roles and deeper roles and more complicated roles - all of this stuff, you always are looking forward to doing. But I think what's also interesting is that when you're thirty-five, no one offers you a role like that. That's the funny thing about it. When you're older, they feel "Oh, now that he has the wisdom, I think it would be more believable for him to play a role like that." Just recently I was offered a role in the movie MAGGIE; that's a very complicated and strange role to play, but very challenging. Where were these scripts twenty years ago? Twenty years ago, when you're on the rise and you're a big action star, people say, "Let's just make money and cash in with what really works. Let's not fix what is not broken." So they give you the same kind of roles: the shoot-'em-up, the good against evil, the good wins and all of that stuff. But now they come with scripts like this, where there is no good against evil. There is less black and white, and more grey areas; the good is also flawed, and is going over the line into the evil, which makes it that much more interesting a role. So it's not like I planned this way - even though that is what you want to do. You always want to do better and more interesting movies. But now I'm being offered more interesting stuff.

Jeremy: So twenty years ago, you were looking for those roles?

Schwarzenegger: You always look for the next best thing, something that is more sophisticated and more interesting to play. But that is not what is always being offered.

Schwarzenegger: Oh, it's a huge project, but it's also a character that has a complex life. He's not a simple action hero. He has his personal life, and that's where the comedy comes in. It was a really terrific role to play. But this one in SABOTAGE is really quite different than that in the approach to who he is and what he is willing to do. He is not willing to be the action hero; he just cannot deal with what happened to his family, and now he would do anything to get payback. "My family does not live, so neither do they."

Jeremy: I like that it is a revenge film that heads down that narrowing path. When that becomes your sole purpose in life, it's easy to get lost.

(This answer is a little spoilery.)

Schwarzenegger: And he realizes that in order to be successful in that world, in that dark and corrupt world of the cartel, he has to go and start working by those principles. As you see, the only the way the police chief would give him the information is by paying him. That's what the cartel has done for years to this police chief: they've paid him to not give out the information. So now I offer more money than they did, and he took the bait. I had to go and get that money, so therefore I had to do certain things to get that money, which was all crossing the line.

Jeremy: This is a film that takes a very gritty approach to law enforcement. In your life, including your years in office, did you have the opportunity to meet these types of people, and did that influence your approach to the role?

Schwarzenegger: Well, when I was in office, I did not deal with the drug cartels. (Laughs) But I did deal with the law enforcement, and I think this is a very realistic approach. Also the whole approach of having the government involved, the federal government and the state and the locals and drug enforcement: everyone is trying to get credit. That's really what happens out there. That is a reality of life.

Jeremy: Did this grittier approach to filmmaking require a different style of acting?

Schwarzenegger: No. The way David Ayer approached the movie was something that he dealt with, not me. He wanted me to do as much research as possible; he wanted me to practice the martial arts and weapons training as much as possible. How to breach doors and how to go through buildings and homes and stuff like that - he wanted us to learn all of that and to practice it so it became second nature. The gritty approach was just the way he shot it and the way he wrote it.

Jeremy: The camaraderie that you had with that ensemble is very believable. Did you have a period where you hung out and got to know each other?

Schwarzenegger: Over a period of three or four months we got to know each other and practiced together and worked out together. We went through the training with the Los Angeles Police. When you do all of these things together, you become kind of a team. You kind of click, so when you do the movie you don't have to start from scratch. I think it was a good idea for [Ayer] to have that organized, to make us really look like members of a SWAT team, and to have them look at me like I'm the leader, the father figure, the boss.

Jeremy: It's fun seeing you with Sam Worthington. You've both worked with James Cameron and have the Terminator universe in common.

Schwarzenegger: We talked about how we were the only ones who had done a TERMINATOR movie, and that made us special - according to us. But Sam Worthington is an extraordinary actor, and I totally get why Jim Cameron uses him. He doesn't have to worry about him. Jim likes to direct, but he doesn't like to tell actors what to do. He likes them to come well-prepared, and that's what Sam Worthington does.

Jeremy: It strikes me that some of this training should be second nature at this point. You've plenty of experience firing guns, and have worked with some of the best coordinators in the business.

Schwarzenegger: Doing action is second nature, but you should not forget that you can do action as Conan the Barbarian, and then all of that weapons training does not help you. You have to be good at horses and good with knives and tigers and swords. No matter what the movie is, it is wise to train specifically for that role. That's why when David Ayer said we should prepare, I did not say, "Why should I prepare? I've done all of the weapons training." As soon as I saw the SWAT team breaching and going through buildings, I realized that they hold the weapons in a different way than someone who is a Navy SEAL would. They go through buildings in a different way, and communicate in a different way. It's quite a different way of dealing with it. If you really want to be authentic, you can't just hold out your gun like the Terminator and go (mimics machine gun fire). No one holds their gun like that on a SWAT team. You want to hold the gun and have it always be ready. For David, it was that whenever a SWAT team member from Atlanta or L.A. or wherever looks at the film, they should say, "Wow. That's exactly the way we train. That's exactly the way we hold our weapons."

Schwarzenegger: It's very hard to pick one over another. I love the TERMINATOR movies obviously, but I would just as much love to do a sequel to TRUE LIES or do KING CONAN. I'd also like to do TRIPLETS with Eddie Murphy. It's hilarious. We've met several times, me and Danny and Eddie, and it's just such a great picture of us together. You say, "Come again? Triplets? Those three guys?" It's funny. They've written a great story, and I think it's really going to be terrific.