Before getting into the review - I want you to know, simply, this is the best Marvel Film to date.  I have light spoilers in this review, but I don't spoil the vast majority of the movie.  You should discover this movie ASAP - and support it!  Marvel is doing astonishing work to bring our collective fantasy world to life and it is really something to behold.  This is the Marvel Age! 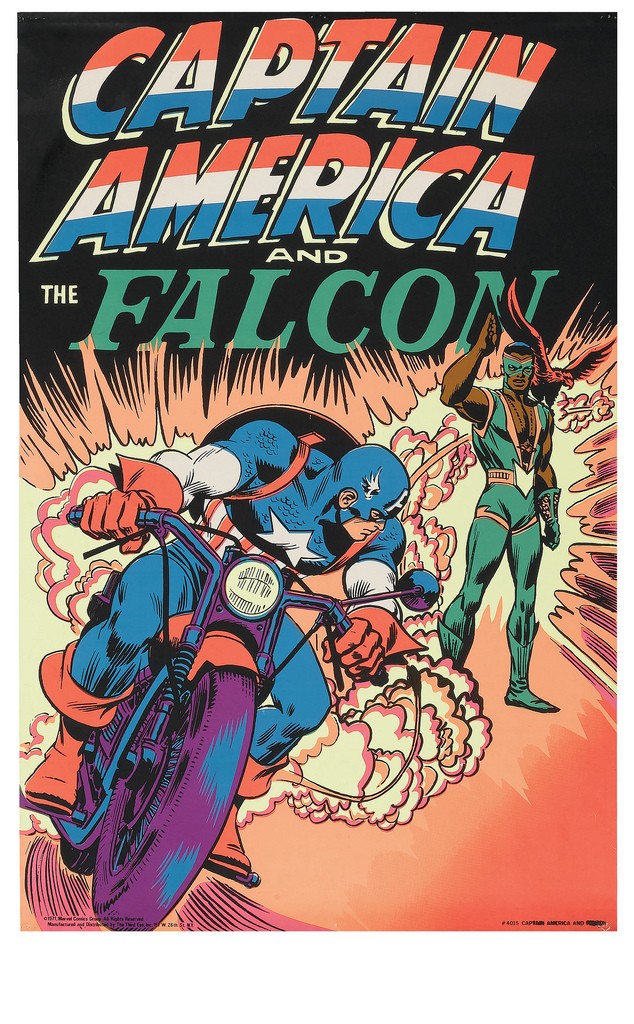 That poster hung on my wall as I grew up.  There was something about Captain America and The Falcon that made me not see color as a division.  That along with parents that were as left as left could be, guaranteed that I understood that America wasn’t about divisions, but about standing united.  That our strength isn’t the differences, but what’s the same.  We breathe air, we drink water, we raise families and want a better future for our people than the present we live in.   CAPTAIN AMERICA may have begun life as a propaganda tool, but I remember Cap’s run under Steranko…  Cap began to run into trouble here at home.  His red, white and blue long johns were not necessarily what “Youth Culture” of the late Sixties and early Seventies were groovin’ to.  But Steranko began a run on CAPTAIN AMERICA with Stan Lee…  that fused all the visual genius that Steranko was playing with on his Nick Fury, AGENT OF S.H.I.E.L.D. run.  That run should be studied by anyone wanting to visually tell badass stories with some of the most inventive framing ever done.  Well, Steranko brought his all (as he always does) and he and Stan reinvented Captain America with issues 110-113.  A LOT of that is in this film – every bit as much as Ed Brubaker’s brilliant WINTER SOLDIER run.   Stan and Jim really began to play with the man out of time aspect of Cap.  They found the times they were in… perfect to play with something that our Soldiers in the Seventies were going through.  Alienation.  But they also had Cap seeing that things were wrong with America.

That run gave us Bucky back, but not like Brubaker, but by having Hulk sidekick Rick Jones partnering up with Cap!  But it also introduced…  Sharon Carter, Cap’s main squeeze.  They even killed Cap.  Hydra was the badguys…  then shortly later we were introduced to THE FALCON…

CAPTAIN AMERICA: THE WINTER SOLDIER is such a perfect Marvel concoction – that as a fan geek…  you’ll just fucking lose your shit!   Sure… I miss the green outfits…  I miss the green and orange or even the red and white of the Falcon…  But those are really really petty issues.  The reality is…  This thing…  It is the wet dream.  Vastly superior to THE AVENGERS.   Nails everything to perfection.

So – how to tackle this review?  It’s a bitch, cuz honestly – I just want you to get in line now and don’t read one extra thing.   I love Captain America not for the authoritative commands he gives in battle situations or how he flings his shield.  It’s how he reacts to our modern policies… the way we dress, our public displays of affection, the way women dress, the tattoos and piercings.  Cap is a bit of a square, but he’s also a bit dazzled by what America has become…  and he still dreams of where it could go… which isn’t backwards, but forward and as a future for us all.

Film reviewers everywhere will be drawing comparisons to Political Thrillers like 3 DAYS OF THE CONDOR or PARALLAX VIEW or BLOW OUT…  but no.  Not really.  This is pure comic books.   Too many Film Reviewers are only influenced by film, but this story pops out of what Lee & Steranko did, which had all manners of political intrigue and VAST CONSPIRACIES…  I mean, lets face it…  NIXON was goddamn president.  They were reflecting the times in the exact same way that the filmmakers were.  Artists of all levels began to seed the media with a distrust of the government, the belief in shadow organizations that control everything.   Because… it’s probably true.

The bleeding miracle of CA:TWS is that they managed to effortlessly blend what basically amounts to the best eras of CAPTAIN AMERICA from the comics into a single film – aware of the trappings of the Political Thriller film genre, but with the holy wow of the action in THE RAID series.   Lots of characters – all played to the point of TILT on your geekometer!

If you’ve been watching AGENTS OF S.H.I.E.L.D. – I can not friggin wait to see how this directly changes the show.  Cuz… man.  THINGS ARE CHANGING!

The movie begins with Cap serially lapping an Army Vet named Sam Wilson…  Cap is cordial with him, but when he comments about the bed feeling wrong, it strikes a nerve with Cap.  It is a very good opening scene for our future Falcon.  Now – if you’re a hardcore Falcon fan…  the origin has been jacked out of a crime alley of Harlem – and Sam’s ex-very-very-special forces.   And he can’t yet talk to the birds, nor does he have an awesome sidekick bird…  I know, I know… but he love’s Marvin Gaye’s soundtrack to TROUBLE MAN, which means “HE KNOWS WHAT HE’S TALKING ABOUT!”  Not only that, but it takes him to his roots in a stylistic way that I always wanted.

After that scene, we’re in mission mode – Cap & Black Widow are off to take care of a CAPTAIN PHILLIPS style incident!  This has Cap going toe to nimble toe with BATROC – not quite yet the leaper, but we’re getting there.   Much like how Frank Grillo’s Brock Rumlow isn’t quite yet Crossbones… but I’m hoping we’ll see the mask soon.  Just how the WINTER SOLDIER character isn’t done by a long shot.  Nor are Cap and the Falcon or Black Widow.

Marvel isn’t killing off villains, they’re not interested in finishing characters off, like D.C. films seem addicted to.  They’re playing the smartest cinematic long game that I’ve ever seen played.  They’re setting up a full and complete Marvel Universe.

By the time you’re watching Cap and Black Widow road tripping to investigate leads, by the time you first see The Falcon in full glory…  or the just exquisite fight scene that begins on an overpass…  or the one that takes us to the sky and towers of SHIELD…  You’ll just be gasping between claps.

Our Sentinel of Liberty is standing strong and dealing with a lot of emotion.   Many periods are done on this film – and when you find some characters in a basement with dusty reel to reel computer drives…  you’re about to geek out in a big way.  Widow drops a line that just about killed me it was so perfect…  only… she isn’t playing with JOSHUA… it is far far worse.   The second I realized the persona… I began to seriously geek the hell out.   In fact, it might be my fave reveal of a film so full of great reveals… that I just love it so.

As for the Brubaker aspects of the story – they’re wonderfully handled.  Sebastian Stan’s WINTER SOLDIER is a great great great character – especially for opposite our dear Steve Rogers.  Here – it is played for maximum impact.  The hand to hand fights are brutal, quick and emotional.  But – Steve and Bucky have scrapped many times before – when you see Cap taking down his enemy, you see it done with such love and care – again – greatness.

How’s Robert Redford?  How the hell do ya think?  He’s ideal!  Perfect, perfect because of everything he conjures by just being in the movie.   The weight of this cast is so perfectly balanced.  We need Redford to deal with Jackson’s Nick Fury – because you will believe it.

Also – I have to admit – I kinda wanna hug all my male friends whilst whispering “Hail Hydra!” – it’s such a great thing to do.

OH – THE WOMEN…  Ok, not only do we have a badass Scarlett Johansson as Natasha Romanoff – and really – this is BY FAR the best she’s been in any of the Marvel films.   But we also get Cobie Smulders back, we have an amazing Hayley Atwell PEGGY CARTER scene, which blew me away.   But I also loved Emily VanCamp’s Sharon Carter!  Then there’s Jenny Agutter – who has a sequence that if you’ve loved that woman for as long as us WALKABOUT, LOGAN’S RUN & AMERICAN WEREWOLF geeks have loved her – your audience may have a serious bit of applause like our audience did.   Great.

HYDRA’s ultimate plan… let that play out for ya.  Just wait for it.  When it is revealed, you suddenly understand the value of what is at stake with this film.   This isn’t some namby pamby plot…  there’s a laser focus of evil at play here – and it makes you want to unplug, turn in your phone – and live simply off the Earth like in MOSQUITO COAST.   Cuz – man.   Yeah.  Given what the NSA knows about all of us – all we need is… well, you’ll see.   F’d up!

How’d it play for kids?   Well, they all about lost their fool minds.   Mainly cuz the action is TOP NOTCH!   Because they have heroes they love as well as being introduced to a larger world of SHIELD.

OH – and how about that SMITHSONIAN SCENE and the “hush” moment.   SO GOOD.

Yeah, this was just spectacular.  Afterwards, fans came up just shouting about how they just can’t believe this film exists.   And seriously – as much as we’ve enjoyed Marvel’s run, they brought it and delivered on what they brought.   That was 2 hours and twenty minutes and felt like 90 minutes.   Just flew by.

Line up now.  It is that good!   Chris Evans’ Steve Rogers / Captain America is note perfect.  Not a single wrong note.   Not a moment where you think, he wouldn’t do that.   And I could watch a Captain America movie that had no action – and just had Steve Rogers getting to know Sharon Carter – and what dating is like.  Cuz, we all know.  Captain America is a virgin.   And when he loses it.  FIREWORKS.  This could be a quickie movie.  Ok ok ok…  After the world trip with the Falcon series of movies.  And definitely after that Dr. Stephen Strange movie that was hinted at in this one!  Seriously – it killed me.  Man… when we finally get mystical Ditko on screens…  THIS IS THE WORLD WE HAVE IN FRONT OF US AND I’M JUST SO DAMN HAPPY ABOUT IT!

We’re nowhere near where real fans are dreaming of – but we keep getting closer and closer and closer and at each flicker of light, Marvel is holding our hands and saying… “WE GET IT!” and that isn’t a feeling fans are used to.  We tend to fear the worst.   This is changing.  Quickly.  I hope this film makes a few billion.   I want Marvel fully unleashed.   A film for every month of the year.   It kills me that I have to wait 5.6.2016 for the next installment in Steve Rogers’ world.   However, I’m a member of the Merry Marvel Marching Society and it definitely makes me clap a little louder, because right now – we all belong!