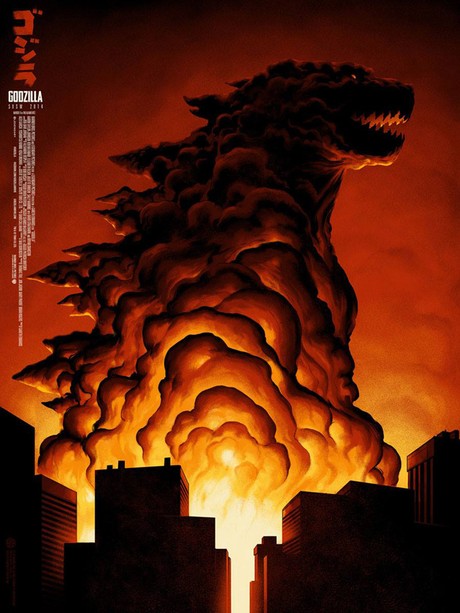 Ahoy, squirts! Quint here. I had the pleasure of interviewing Gareth Edwards before the archival 35mm non-Raymond Burrified Godzilla '54 ran and that's probably a very good thing. After the movie Edwards came out and introduced a 7-ish minute sequence from his Godzilla, which had me buzzing so much that if I had to talk with him after seeing it I probably would have drooled and blabbered and made random circus geek noises... well, moreso than usual.

It's not that the Godzilla '14 footage was Matrix next level groundbreaking shit, it's how much personality and atmosphere and intelligence was on display. Just smart, smart filmmaking.

The sun is setting in (I believe) Hawaii. A family on a beach notices something strange. The waves come in and then go out. And keep going out. Fish flap on the wet sand as the water recedes even further.

Out in the ocean Ken Watanabe is on an aircraft carrier and sees something in the distance. Looks like a massive shark fin cutting the water's surface, but it's not just one. Multiple appear, obviously Godzilla's back scales. The monster isn't seen, but passes under the carrier, ant-size people running rom one end to the other to see it come out the other side... this shot and sequence was super Jaws-like, by the way.

Back on the mainland Aaron Taylor-Johnson is on a railcar at an airport. You know, the ones that take you from one terminal to another in the big airports. Anyway, the power goes out and he calms a small boy, telling him the power will come back on soon and not to worry.

On the beach a father sees the eerie receding water and grabs his daughter, starting to run before most know what's going on. A dog is tied up to a tree and barks at the water as it begins to return in a typhoon fury. The dog breaks the leash and runs, outpacing the humans as the father carrying his daughter ducks into store with a glass front just as a tidal wave of water floods down the street. Through the glass windows we can see debris and people wash by. No sign of the dog, but later Edwards said he probably survived, got a high place. “But then he died of cancer.” Dark humor. I like it!

This section was very much in the vain of The Impossible. Natural disaster feeling, not big monster feeling if you know what I mean. In a bird's eye aerial view we see the water lulling to a stop, the town flooded. On the rooftop of one of the flooded tall buildings people set off a series of red flares. Camera follows the flares and we see Godzilla's arms and legs, showing the size of him. We see this in the trailer.

Back at the airport the power comes back on in the railcar and the kid seems less freaked out. The track behind them lights up in sections, brightening up the airport as it goes. One section, two, three and then something seems wrong. The next section lights up and a crazy bald bat-looking monster stands over it, two legs on each side. It's kind of like the Cloverfield monster in proportions, but much more detailed.

This thing goes crazy and starts tearing up the railcar. Taylor-Johnson protects the kid as the thing gets thrown about, ripped open and people start spilling out. This monster is maybe 25-30ish feet tall, I'd guess. In the chaos of the attack a chain reaction of explosions is set off, jet fuel in airplanes parked at gates ignite and like dominoes they explode one after another. The final one explodes and a thick foot stomps down.

Godzilla's got stumpy, thick legs. There's nothing lithe about this design. Very thick, very sturdy. Camera tilts up in a full reveal as the King of Monsters faces off against this bat monster, which looks tiny in comparison. His small arms move in an agitated way and when we see his face full on he has a distinctly pissed off “I'm going to start some shit right now” stare-down. He roars and that's it.

The audience went bananas and I was with them. Those little visual flairs, the ebb and flow of intensity really made this feel Spielbergian without aping his exact style. I'm wholeheartedly convinced that if the movie ends up being even somewhat good that Edwards has cemented himself as a top-of-the-list tentpole director for the next two decades. His visual storytelling ability is that strong in this footage. It's populist, but incredibly inventive and doesn't treat the audience like dumb kids.

Who knows what the finished product will look like, but from the whispers I've heard from those that would know the thing is coming together fantastically. I hope they're right because I'm going to be extra depressed if this one's a misfire. There's so much potential and every piece of marketing has been spot-on. The producers at Legendary seem to be almost as big of fans of the source material as Gareth Edwards and have given him a shot at something that he's desperate to do right by.

All signs point to a home run. If they hold up we're going to have something special in front of our eyeballs this May.

I'll be transcribing my interview with Edwards very soon, so keep your eyes open for that. Now some sleep before SXSW shifts into third gear. Nighty night, folks.