Merrick Stands Up In The Milky Way To Be Pummeled By The Greatness Of COSMOS: A SPACETIME ODYSSEY!!

A few words of disclaimer and disclosure before proceeding…

Carl Sagan…and his 1980 TV series COSMOS: A PERSONAL VOYAGE…mean a great deal to me.  My father was an author, and received communications from Carl discussing how Sagan’s fictional foray CONTACT was partially influenced by my dad’s writings.   I hold the original COSMOS as a high watermark in informational television:  it’s a soaring, spectacular, and bold effort to humanize and make relevant notions so enormous, and so provocative, that they are literally too daunting for most of us to wrap our brains around.  And, for the most part, that series succeeded brilliantly.

As such, it was with tremendous enthusiasm that I greeted word that the series would be resurrected - under the watchful eye of  Ann Druyan, Sagan’s wife, and Neil deGrasse Tyson - the most impassioned, eloquent, and effective communicator of science alive today.  But there were also…questions.  Should COSMOS even be attempted twice?  Can lighting strike twice?  Above all, can the COSMOS zeitgeist be resurrected for a modern, more cynical, more challenging audience?

Based on a review copy of the first episode of the show, the answer is…quite simply…

Viewers deeply mired in Sagan’s original iteration may be taken back by a few cosmetic changes here:  gone is any semblance of the masterful soundscape which so vividly defined the 1980_s version.  No Vangelis.  No classical music.  No ‘vision’ in terms of overall ambient atmosphere.  This COSMOS is scored by Alan Silvestri (BACK TO THE FUTURE, PREDATOR), who goes for an entirely different vibe here.  The soundscape of the original was often graceful, surreal, and elegant - Silvestri goes for a bolder, more adventuresome, travelogue approach with all original music (in this installment, at least).  An unfortunate call?  Not at all…but also not what fans of the classic series might be expecting.

Another stylistic variation is the incorporation of significant quantities of animation.  Many of the live-action dramatizations seen in the original show are supplanted here by animated segments, evidently realized via artists hand picked by Executive Producer Seth MacFarlane.  While these sections work well enough, their approach and aesthetic is markedly different from the show wrapped around it…it’s hard not to be pulled out of the magic Tyson and first installment helmer Brannon Braga are working to achieve.  A more graceful way to present these sequences might have been found.

Such quibbles aside, COSMOS takes flight very quickly and doesn’t let go of its viewers.  Saganisms about here, and…while this COSMOS is more of a reboot than a continuation…there are ample call backs to the original show’s iconography, both obvious and subtle.  Sagan’s ‘Ship of the Imagination’ is back as well - sleeker and badassified... 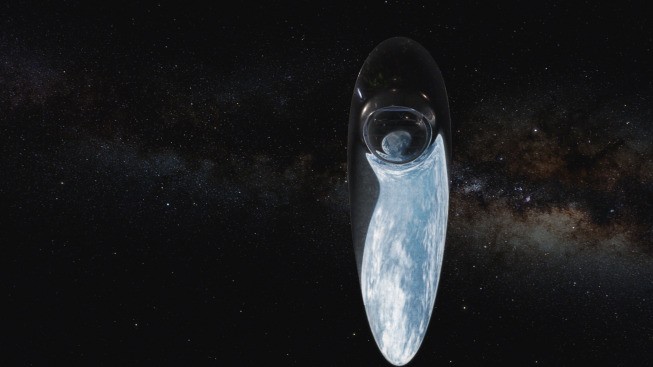 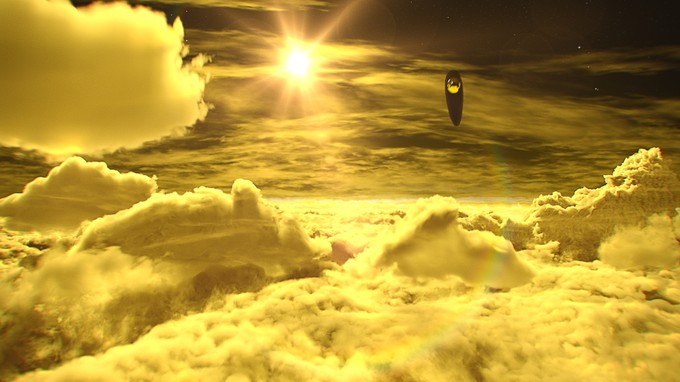 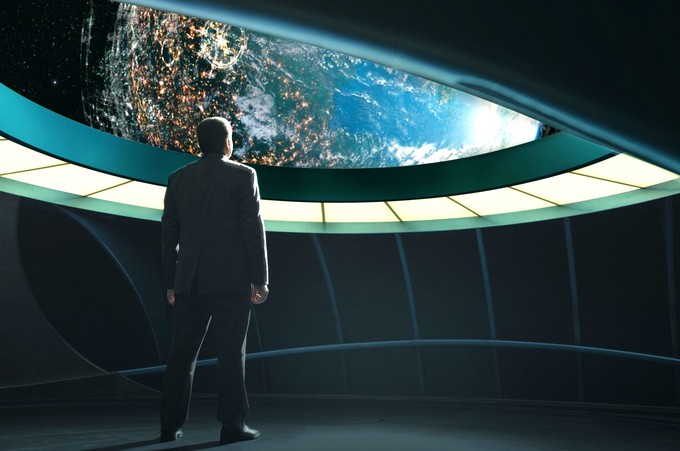 [when watching the show, note the interactivity of the ship’s viewing portals with Tyson’s wardrobe]

Notably, the VFX in the new COSMOS are easily among the most spectacular work ever brought to television.  Moments of the first episode are truly, breathtakingly stunning.  Period. 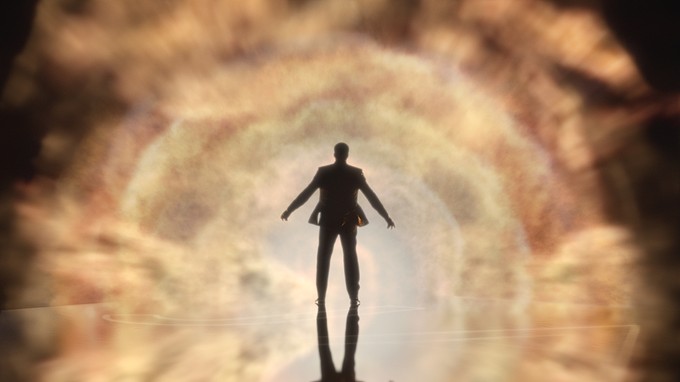 The launch episode - Standing Up in the Milky Way - is divided into a few distinctive parts:  Tyson’s brief introduction, a whirlwind tour thorough the known universe, the afore-mentioned animated aside chronicling the tales and woes of Giordano Bruno  (a Dominican friar in the the 15/1600s who had all the right ideas about the universe at all the wrong times), concluding with a reprise of Sagan’s fabled Cosmic Calendar.  It is in this sequence where Tyson, Braga, the VFX team, and all involved swing for the fence and truly knock the ball out of the park. 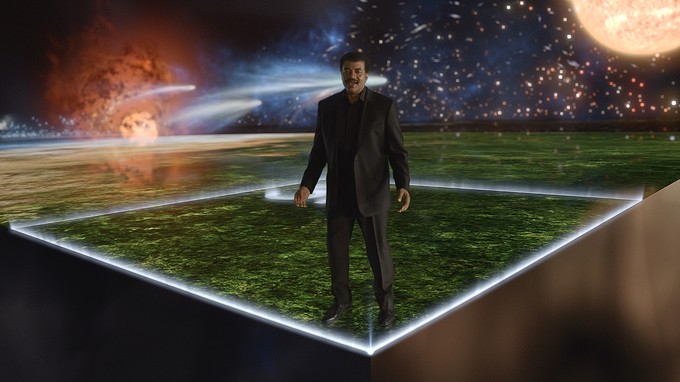 The final fifteen or twenty minutes of SUITMW are visually mesmerizing, emotionally impactful, and masterfully bring home the humbling impact of who we are as a species, and how minuscule all of our hopes, dreams, loves, hates, angers, fears, accomplishments and failures are when compared to the unspeakable enormity - and utter indifference - of time and space.

While much of Sagan’s graceful and poetic elegance supplanted here by Tyson’s considerably more everyman enthusiasm, there are also moments in the premiere episode - especially when Tyson is speaking in VO - when one can almost hear him channeling Sagan.  He does Sagan proud - and you can hear his devotion to, and love of, this material.  Not surprisingly,  one instantly accepts, without reservation, Tyson’s evangelical certainty that what he’s telling us about is important.  And, by allowing him to guide an exploration of who and why we are as a species, we also come to understand why what he’s saying it’s important.

I watched COSMOS: A SPACETIME ODYSSEY with my lady and our seven year old son.  By the time it was over, my lady said that Neil deGrasse Tyson was her new hero.  Our seven year old has been asking for ‘more episodes’ since our screening last week.  Every day…day after day…COSMOS has left him wanting to learn and expand and experience and relate to the world around him more than ever before.  He’s even hoping for COSMOS LEGO sets - perhaps the highest tribute any child could afford a show.

If this series serves no other purpose than igniting the imaginations of the next generation, and opening their minds and spirits to the way things are, and the way things could be?  Then it will be invaluable.  But COSMOS: A SPACETIME ODYSSEY looks to be more than that.  It’s a wake up call for all of us made of starstuff  - and a  potent and necessary reminder that the best reason to grow and reach outward is to better understand ourselves.

COSMOS: A SPACETIME ODYSSEY premieres Sunday across an impressive array of networks:  learn where you can see it HERE. 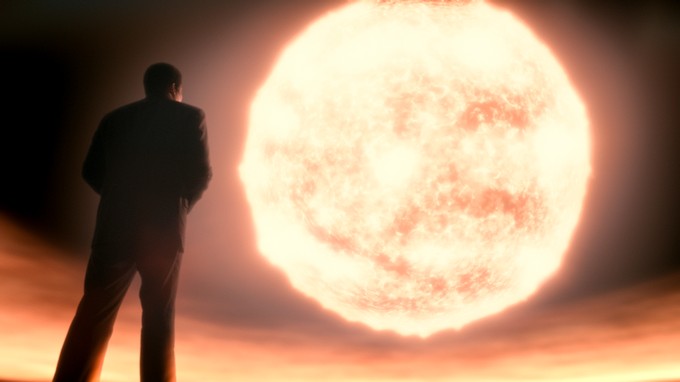