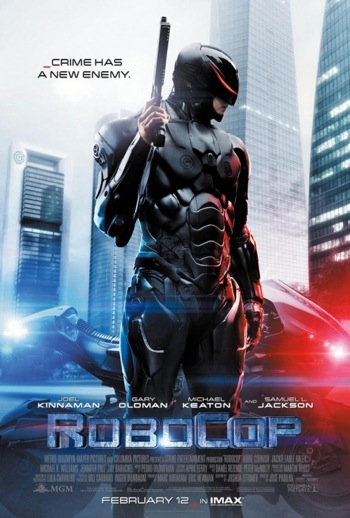 Sony/MGM's ROBOCOP has the right idea. Unfortunately, it's got a lot of other ideas that aren't so hot, and the creative team entrusted with making sense of these notes and notions and branding opportunities seems mightily overwhelmed.

At its core, the film is about a good cop becoming the just-human-enough face of justice and security for a wildly fearful society. He's the palatable transition between corruptible, ineffectual police officers and intimidatingly lethal droids; if successful, his manufacturer, Omnicorp, will reap a windfall, and citizens will gradually acclimate to living in a police state. There's only one problem: the cop they've chosen for this PR errand has retained the memories of his near-murder, and would like very much to bring his would-be assailants to justice - which, of course, is way too much free will for the controlling Omnicorp. They're quite comfortable with the rigged system that's in place, and they'd like the general public to not question it.

Granted, that's basically the gist of Paul Verhoeven's ROBOCOP, but the primary difference here is that the streets of Detroit - at least, what little we see of them - don't look so hellish. And yet, thanks to the fear mongering of a Bill O'Reilly-esque gas bag named Pat Novak (Samuel L. Jackson), the public is beginning to believe the wolves are at the door and more protection is what they need. Initially, Novak and Omnicorp attempt to show off the ED-209 program's high-caliber effectiveness on the U.S.-controlled streets of Tehran, but that literally gets shot to shit when, in the midst of a coordinated suicide-bomber attack, one of the drones obliterates a knife-wielding youngster. This is all captured by Novak's news team before he can shut down the feed, and it only swings the American public's support back to the current federal ban on robotic law enforcement - which Omnicorp bigwig Raymond Sellars is obviously eager to overturn.

The notion of fear-driven news (be it Fox or CNN) leading to a widespread, paranoid outcry for protection at all costs is interesting as a post-9/11 dilemma, but the opening Tehran bit - which echoes the boardroom failure of the ED-209 from Verhoeven's film - botches this by revealing that U.S. has occupied Iran and, save for the antics of a few suicide bombers, basically pacified it. That's one big (irrational) fear symbolically neutralized. Without the threat of terrorism being exploited, there are two ways to explain the public's heightened interest in enhanced law enforcement: crime is skyrocketing in the U.S., or Omnicorp and its puppet news organization are ginning up mass hysteria.

Either scenario works dramatically, but neither is firmly established; as a result, everything in Sony/MGM's ROBOCOP is happening in a vacuum. The opening sequence attempts to put the audience in the shoes of the oppressed, but that perspective is jettisoned immediately; once the film shifts back to the U.S., the outside world is completely ignored. There's no context for Omnicorp's machinations; they're just overreaching for profits like corporations do. From here, it's just a satire-free reworking of the original.

This could be entertaining, too, but what should be a viscerally-engaging quest for revenge on Officer Alex Murphy's part is a total non-starter due to a lack of a truly hiss-able villain. Director Jose Padilha and credited writer Joshua Zetumer (who followed the contours of Edward Neumeier and Michael Miner's original screenplay closely enough to earn the duo a credit on the new film) are far more interested in Murphy's awkward reconnection with his family, and boardroom-bound ethics debates between Omnicorp executives and the compassionate-yet-conflicted creator of RoboMurphy, Dr. Dennett Norton (Gary Oldman). But aside from a stock domestic scene with the wife and kid, the filmmakers make no real effort to get the viewer invested in the Murphy family's tragedy; it's just obligatory dramatic business that distracts the movie from its more interesting concepts. And while the boardroom scenes are occasionally engaging, Keaton, Oldman, Jennifer Ehle and Jay Baruchel can only add so much color to the insipid dialogue. Ultimately, they sound like spitballing sessions Padilha and his writers should've had before they went into production.

With so much going on outside of the main narrative, there's not a lot of room for action in ROBOCOP - which, for a ROBOCOP movie, is kind of problematic. On one hand, it's nice to see a mega-budget studio remake straining for thoughtfulness, but the pulp potential of the piece winds up being completely squandered. Padilha largely denies the audience the pleasure of watching Robocop on the job, perhaps because he's uncomfortable with getting a kick out of poor Alex Murphy doing what he was wrongly programmed to do. Instead, the film rushes into Murphy's hunt for the criminals and corrupt  cops who tried to kill him - but Murphy is such a cipher as a regular guy and as Robocop that there's no significant emotional investment in the action. It's just well-staged mayhem by a director who can't figure out which movie he's making.

The film derails so early that it winds up being somewhat passable as a meat-and-potatoes action film by sheer dint of below-the-line artistry. The production design is competent, the visual f/x are generally solid and Pedro Bromfman's score occasionally quotes Basil Poledouris's classic ROBOCOP '87 theme. The film hits its nadir when Jackie Earle Haley works a lazy variation on Bixby Snyder's "I'd buy that for a dollar" catchphrase, but it otherwise avoids such direct comparisons. Perhaps that's the triumph of Sony/MGM's ROBOCOP: it's a mediocrity on its own by-committee terms.