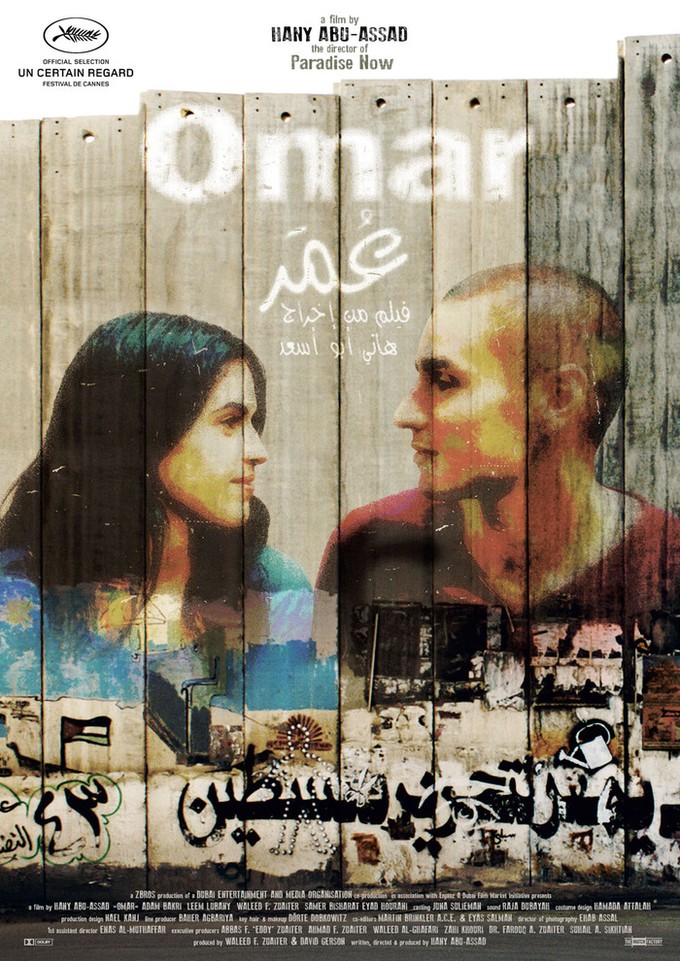 One great thing about the Santa Barbara International Film Festival is that it sits right between the time when the Academy Award Nominations have been announced and when they are awarded.  Many of the nominated films play the festival, and I use it to catch up on some of the films that either haven’t had a wide release, or I just missed.

OMAR was nominated for Best Foreign Film, submitted from v.  It also won a Jury Prize at Cannes in the Un Certain Regard section.  But OMAR isn’t what you expect.   It is part action film, part character study, part psychological thriller, and part meditation on the forces that shape the lives of people in the region and perpetuate the conflict.

Our protagonist, Omar, grew up with his friends Amjad and Tarek, and is now dating Tarek’s sister Nadia.  But he now has to risk his life climbing the Separation Wall in the West Bank to see them.  Omar works hard as a baker, and is saving his money to marry Nadia.   But when one of his friends kills an Israeli officer, Omar gets caught, imprisoned, and tortured.  One of his captors tricks him into a kind of confession, then releases him into the community where he is expected to gather intelligence on his friends.  This begins a cat-and-mouse game between all parties, where nobody’s loyalty is quite clear.

I know many will skip the film because they fear it will be a polemic.  And for sure, the Israelis, or at least the military, are the villains.  But Omar and his pals certainly aren’t saints -- they murder officers and rat each other out to get back on the street.  But the politics of the situation is only the backdrop -- at its core the film is a complex study of characters, of loyalty and betrayal, and what we are capable of doing for friendship, for love, and to save our own ass.  I could imagine transplanting the story to an inner-city setting, with the childhood friends being in a gang and the police manipulating them to gain intelligence.  In some ways this makes OMAR similar to THE WIRE -- nobody comes out smelling like roses, but a simple tale of good vs. evil is not the point.  Rather it is to comment on the conflict in a community and how aspects of it can bring individuals to do awful things, all while telling an entertaining story.

Adam Bakri delivers and outstanding performance as Omar.  I was shocked to find out that this is his first feature.  He excels at walking a tightrope between toughness and vulnerability in a physically and emotionally challenging role.  He is constantly running from the authorities, has to undergo torture, and is constantly being backstabbed or heartbroken.

Director Hany Abu-Assad had a previous Oscar nomination for PARADISE NOW, the first for Palestine.  With OMAR he has delivered a complex and beautiful-looking film.  We have time to get to know characters, and most are presented as nuanced individuals.  But at the same time, the plot never drags, as someone is nearly always in danger.

In a film with many strengths, the best part of OMAR is the ending.  I won’t spoil it, but I will say that has the kind of ending that isn’t exactly a twist, but is a perfect shocker.  Well, shock is the initial reaction, but that isn’t to say it is poorly motivated.  On the contrary, in one quick scene the film is wrapped up from an action, thematic, and character standpoint with staggering efficiency.