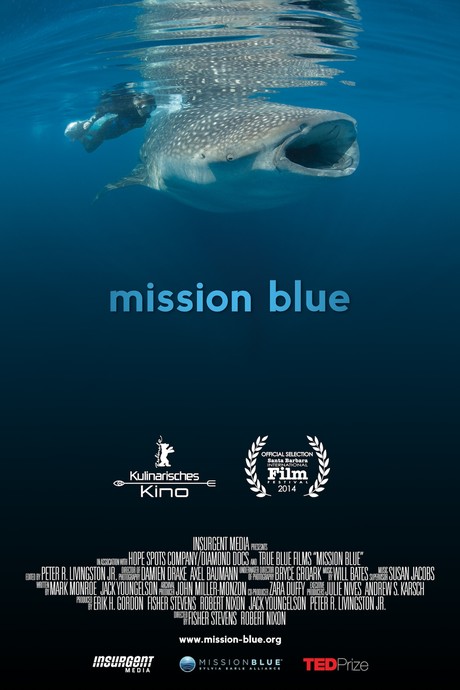 We all know James Cameron is a submarine-driving, sea alien documenting, ocean-floor-visiting, bad-ass. But who does he look up to? Sylvia Earle. She’s an oceanographer who has discovered many forms of marine life, set a depth record in one of those awesome hard dive suits, helped to design some of Cameron’s equipment, and has *lived underwater*. On top of that she’s a National Geographic explorer-in-residence, TED prizewinner, and was director of NOAA until she resigned so she could speak her mind more freely.

MISSION: BLUE is a documentary following Sylvia Earle for three years on her escapades exploring the ocean, crusading to protect it. It was directed by Robert Nixon and Fisher Stevens. Robert Nixon is no stranger to such projects, having been a conservationist and director of documentaries about all kinds of people, creatures and environments on our planet. Fisher Stevens is also well suited to the material, one of his many hats having been a producer on the oscar-winning documentary THE COVE.

Humans are doing some pretty nasty things to the oceans: fishing some species to the brink of extinction, creating “dead zones” around coasts worldwide due to fertilizer runoff, upsetting ecosystems from global warming, and contributing to a dramatic reduction in coral reefs worldwide. But these concepts are somewhat abstract. How do you show this in a film? Visit a dying reef? Show graphics illustrating the idea? Showing animals dying from an oil spill? MISSION: BLUE does all of these things, but if it had done only them it would come across as a polemic. Instead, by focusing on Earle we get some human interest, and a desperately needed injection of hope. Here’s someone making a difference. Earle’s idea (for which she won a TED prize) is that we should establish “hope spots” -- essentially national parks for large parts of the ocean where fishing and dumping are prevented.

Fortunately, Earle has been in the spotlight long enough for there to be a fair amount to work with. There is footage of her from the late 60’s and early 70’s, where she was part of the Tektite project, living and doing research in an undersea habitat. And of course there is footage of her as NOAA director in the Bush I administration. The rest is filled in with old home movie footage (or what looks like it), interviews from friends and colleagues (including James Cameron), and interviews with the incredibly charming and passionate Earle herself. Even at 78, she’s still strapping on the tanks and wetsuit and continuing to explore. Her passion for the sea is infectious.

In addition to being a scientist and film lover, I’m an avid diver. MISSION: BLUE might as well have been laser targeted at me. It has high production values, has some amazing shots of undersea life, documents an important cause, and paints a compelling portrait of a fascinating individual. But this isn’t to say it is successful in everything it attempts. As a scientist myself, I’m somewhat uncomfortable when journalists make the story all about the person instead of the science. But I talked about these choices with Earle and Stevens after the film (she seemed reluctant to have the focus on her, he thought it was necessary), and I understand why it was done. Still, here it goes a bit overboard when part of the story focuses on her past marriages and family life. I’d rather that time be spent telling us how global warming could be affecting reef ecosystems, or presenting some solutions for the seemingly intractable problem how to get nations to act in the global interest. And at time the film drags a bit.

But these are nitpicks. Overall, MISSION: BLUE is a compelling, well-made documentary about an important topic. And it introduced me to Sylvia Earle. She’s a national treasure and an inspiration. 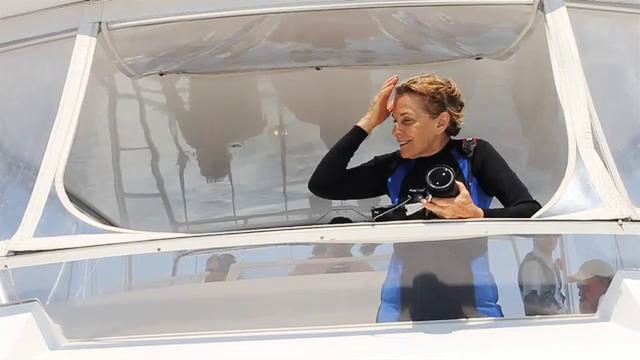