Copernicus drinks in doc A YEAR IN CHAMPAGNE! 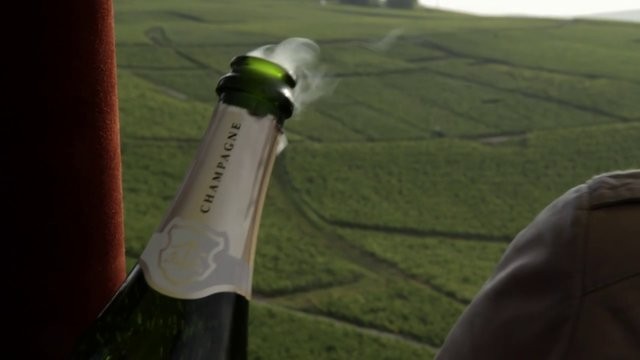 A YEAR IN CHAMPAGNE follows the process of producing Champagne over the course of a year, from planting of the grapes to the harrowing growing season, through the harvest, and finally to the fermenting and blending of the wine. It is the sequel to the well received A YEAR IN BURGUNDY, which did the same for the fabled red wine growing region in France. Along the way we are introduced to the tragic history of the area and the colorful characters who produce everyone's favorite intoxicant.

Director David Kennard has a long history in documentary filmmaking. He was even one of the producers and directors of the original COSMOS series with Carl Sagan. (One of the reasons I'm an astronomer!). Here he is working with a small crew, including his son.

British sensibilities are on full display here, from the narration to nods to how the tastes and industrial knowledge of the Brits have worked hand in hand with the traditions and expertise of the French to shape the development this bubbly elixir. Having said the centuries-long rivalry between the two countries doesn't color the narrative -- nothing but admiration is shown for the French farmers and Champagne producers.

This is a straightforward documentary in the classic style. There are is no trickery, fancy camera work, or exotic filters. The filmmakers simply let the product and characters speak for themselves. They follow several organizations involved in the process, from small family operations who produce small batches to large houses who have everything automated. We get glimpses of the family patriarchs, the migrant grape harvesters, the people who clean the tanks, and those who perform the arcane magic of blending the final product.

The Santa Barbara region is known for its winemaking -- SIDEWAYS was filmed just north of here. As a result, I've been on plenty of wine tastings and tours. But I still learned a lot from A YEAR IN CHAMPAGNE. The Champagne region is pretty far north, so the grape production is highly sensitive to weather fluctuations. Some years they don't even produce a 'vintage.' The year followed in the film, 2012, was especially dicey. But maybe the most important question is: how do they get the bubbles in there? Yeast! But the way it is far more complicated than that. You'll have to see watch the movie for the details.

I do wish A YEAR IN CHAMPAGNE would have focused a bit more on the science and a little less on the people involved. Or perhaps contrasted the California and French approaches to winemaking (to oversimplify, France is all about rules and tradition, California is a bit more experimental and scientific). But those are my personal biases. There is a little something for everyone here: people, history, and science. The only thing missing is a glass of bubbly itself. My recommendation: grab a few bottles of the brands mentioned in the film, pop in the DVD, and have a drink-along party. Are you listening ALAMO DRAFTHOUSE?