Quint loved THE BATTERED BASTARDS OF BASEBALL... and got to talk about The Thing with Kurt Russell. That too. 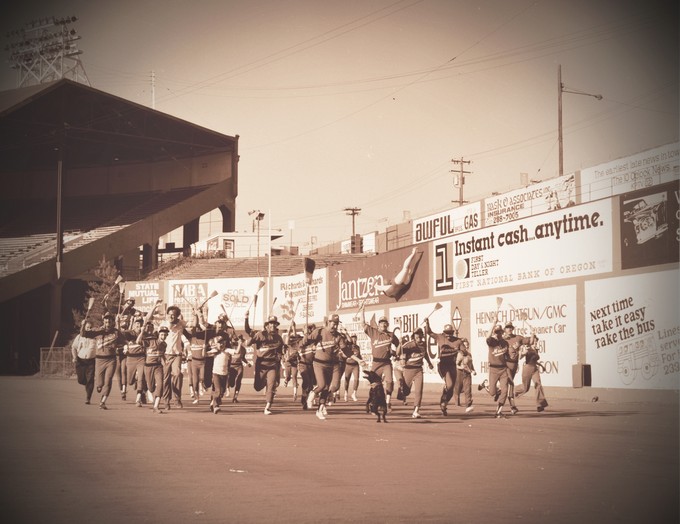 Ahoy, squirts! Quint here after one hell of a night. I've been playing coy on Twitter about seeming to lock in a fantastic interview during Sundance and it was for this movie. I don't have to be coy anymore because it is confirmed... Tomorrow I shall be interviewing Kurt Russell alongside his nephews Chapman and Maclain Way, directors of this documentary about Bing Russell and the crazy non-league baseball team he created.

I know, right? I'm freaking out, too, but less so since seeing the movie. For one, it's great. I know fuckall about baseball and if I was carried emotionally through this supremely entertaining documentary then anybody can be. The second reason I'll get to in a bit, but let's talk about The Battered Bastards of Baseball for a moment.

In the early '70s independent teams had been sucked up into the major leagues and that didn't sit well with Bing Russell, a character actor (or as Kurt calls him in the movie, a plumber actor going from job to job) who appeared in hundreds of films and TV shows, most famously as Deputy Clem on Bonanza. He might have been a performer, but his first love was baseball. He kind of had an Almost Famous style childhood in New York, growing up tagging along with the likes of Joe DiMaggio and Lefty Gomez and other famous Yankees.

Remember I know nothing about sports, so this is all stuff I picked up in the doc. And I'm retaining it! Maybe there's hope for me becoming a real man one of these days!

The thing about Battered Bastards is that it's more about a fight against bullshit “just because I said so” authority. Why shouldn't pudgier and blacklisted players have a second chance? It feels like Bing decided to stand up to Major League Baseball and he created the Portland Mavericks, populated it with a veritable Bad News Bears style ragtag group of unlikely players who might not have the power, but they had the heart and drive to win games and woo crowds.

In other words, Russell injected life into the sport by giving baseball fans a team with personality. Sometimes that personality was rude, crude and bleary-eyed, but it was all in a for-the-love-of-the-game way. Did I mention that Kurt himself played for the Mavericks?

The doc lets us get to know Bing Russell a little bit through a mixture of archival footage, talking heads and clips so that when we get into the assembly of the Mavericks and the impact that had on the sport we already feel like we know the grand leader of this operation.

Chapman and Maclain Way's love for their grandfather is evident in every frame of this quick 80 minute doc. Unlike a lot of young documentary filmmakers they understand pacing. The thing moves, gives you a ton of information, but never makes anyone feel like they're drowning. They made that rarest of rare things: an entertaining documentary that doesn't have to sacrifice emotion.

The score was great, the pacing was perfect, the subject was fascinating even to a non-sports person and it has what any sports-themed documentary needs: a compelling underdog story. I am quite taken with The Battered Bastards of Baseball. You'll definitely be seeing someone pick this up, no question.

Before going into the theater, Morgan, the publicist, asked if I'd like to go to a dinner afterwards with the guys behind the movie. This is a common publicity event that's usually reserved for the more party-centric outlets to rub shoulders with talent and grab quickie quotes for bullet-point pieces.

I've been to a couple of these before. It's called a dinner, but it's really a huge gathering of press and friends of the film being celebrated. Not quite an afterparty, but not exactly a nice, intimate place to hold a real conversation. Going to this dinner meant I had to miss seeing Calvary (John Michael McDonagh's followup to The Guard), a film I really want to see before departing Park City. But... Kurt Russell.

There was no guarantee I'd get to shake his hand and say “Pleased to meet you” let alone chat him up in a more casual setting than a direct interview, but I couldn't turn down the chance, so I did it.

At first it was exactly what I expected it to be. I stood around awkwardly off in a corner while the filmmakers (who are all family) hung out and caught up. The dinner itself was nice because I got to shoot the shit with Slashfilm's Russ Fischer and HitFix's Katie Hasty. But after food (and a bit of wine) Morgan called us over and brought Kurt to us.

I introduced myself as Eric from Ain't It Cool News and his face lit up. “I know that place. You guys actually like my movies over there!” Um, yeah. He was specifically talking about Death Proof and it was quite clear he really cares for that one.

That lead me to bring up being a particular screening of Vanishing Point. When Tarantino was in Austin filming the movie he'd regularly hold cast and crew screenings that I might or might not have invited myself to. When I brought up that screening, Mr. Russell mentioned that he had read for that movie, saying that when he was in his early 20s he'd go out for any and everything, usually competing with Jeff Bridges and Don Johnson. “I saw them on a weekly basis.”

”Can I ask you something really geeky,” I inquired. Without batting an eye he said go right ahead. “The Thing is one of my favorite movies and I'd like to ask what you think about the ending, the final scene...”

My intention was just to ask him if he thought about Childs or MacReady's chances at being less than 100% human, but Mr. Russell was more than happy to dive into the evolution of the ending of The Thing. He said that throughout shooting he and John Carpenter were not satisfied with the scripted ending. He didn't say what that ending was other than it took the movie “back to square one.”

Mr. Russell would write out some ideas and give them to Mr. Carpenter as the shoot went on, most of which Carpenter dismissed, but then he came upon what ended up in the film, which he described as a Cold War analogy. Mac doesn't trust or like Childs and the feeling is mutual, but they just end up staring each other down. He liked the ambiguity to the paranoia and even quoted the last line. “Why don't we just wait here for a while, see what happens,” then did the “bum. Bum-bum. Bum. Bum-bum” of Morricone's score. I think I had a tiny nerd aneurism when that happened.

In our brief time chatting at the party he also brought up “that piece of shit Poseidon remake” as well as the emotional hit he took seeing the footage of his father in Battered Bastards. It was the fact that the footage of him in the doc was from his prime, the way a late teens/early 20s Kurt Russell remembers him. It was the first time he had seen his father talking since he died (12 years ago). He said it was embarrassing to have that all rush him while he was on stage for the Q&A (“nobody wants to see that shit”), but it really blindsided him.

It was a total trip talking to him. He was electric, laughing and enthusiastic when telling stories. I'm still kind of reeling from it, actually. I look forward to our chat about Battered Bastards tomorrow, which should go well and stay on topic now that I let some of the geek out at this little gathering.

And who knows? Maybe I'll pitch doing a big AICN Legends chat with him in the near future. How amazing would that be?

Make sure to follow me on Twitter so you can get the immediate scoop on the crazy nonsense I'm up to at Sundance this year.