Quint sees Jemaine Clement and Taika Waititi's New Zealand-set vampire mockumentary WHAT WE DO IN THE SHADOWS! Sundance 2014! 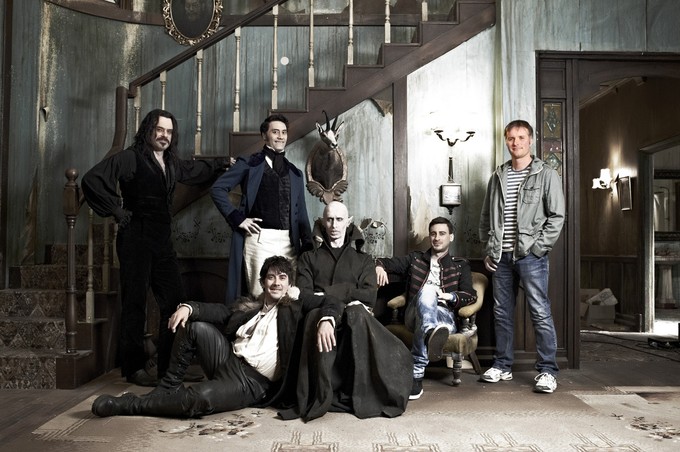 Ahoy, squirts! Quint here fresh from the midnight premiere of Jemaine Clement and Taika Waititi's WHAT WE DO IN THE SHADOWS. When the duo took the stage at the Egyptian Theater they made sure to inform us that this documentary we were about to see changed their lives and caused them to question who the real vampires were... the blood-sucking subjects, the documentary crew themselves or the audience who was about to watch the totally real and in no way fabricated documentary about the vampire scene in Wellington, New Zealand.

So you know what kind of tone they were setting for this incredibly funny faux-documentary about four vampires that share a Wellington flat. They range in age from a few hundred years old to 8,000 years old (that's Peter, the Nosferatu lookin' dude) and have the same kind of bonding and bickering moments that regular flatmates do, except their arguments usually revolve around ignored chores like cleaning the bloody dishes (literally) and whether or not one of them is too lazy to float up to the corner of their flat and vacuum the cobwebs.

Taika Waititi plays Viago, a more romantic kind of vampire who followed the love of his life to New Zealand from Europe some 60+ years previous. Unfortunately his dumbass human helper cheaped out on shipping his coffin and it took over a year for him to get delivered to the other side of the world and by then his love had married.

Jemaine Clement is Vladislav, an old warrior vampire like Vlad the Impaler. He loves torture, but after a horrible defeat at the hands of his arch nemesis, The Beast, years prior his other powers, like shapeshifting and hypnosis, have suffered a bit. There's one particularly disturbing moment when he turns into a cat with a human head.

Jonathan Brugh is a young vampire, less than 200 years old, and is still considered the kid. He's got more attitude than the rest and is kind of a dick.

The jokes fly a mile a minute, especially in the first act, and the entire audience (myself included) was cracking up consistently. It's really fuckin' goofy, but also really smart, especially when they fold in a new addition to their ranks who introduces the vampires to the wonders of modern technology.

Wellington isn't just full of vampires, though. There's a werewolf pack led by Rhys Darby, which will excite fans of HBO's Flight of the Conchords series, some depressed zombie groups and, of course, witches and warlocks.

While most of the movie relies on the fast wit of the great comedic actors inside their house, they do pick a few moments to really open up the world, including a giant supernatural ball.

I was a fan of Clement and Waititi's previous feature collaboration EAGLE VS. SHARK, but I get the feeling I'll revisit What We Do In The Shadows ten times more. The jokes are just so out of left field, the blood flows in gushes of arterial spray and the complete random nature of the gags just tickle my funny bone in ways that I feel will hold up to repeat viewings.

The highest compliment I can give What We Do In The Shadows is that reminded me a lot of Peter Jackson's early work. It might not be as crazily inventive as Meet the Feebles or as bloody as Braindead, but it shares a common distinctly disturbed (in a good way) Kiwi soul.

I'll definitely keep you updated on the distribution status of this puppy. I think a good deal of you nutballs who appreciate juvenile humor as much as I do will really dig this one. 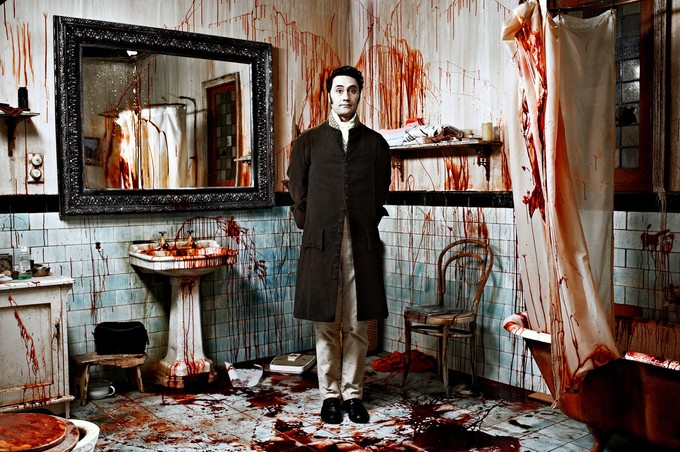 Make sure to Follow Me On Twitter as I continue to explore the 2014 Sundance Film Festival. I'll be tweeting my immediate thoughts throughout the fest, so follow along!