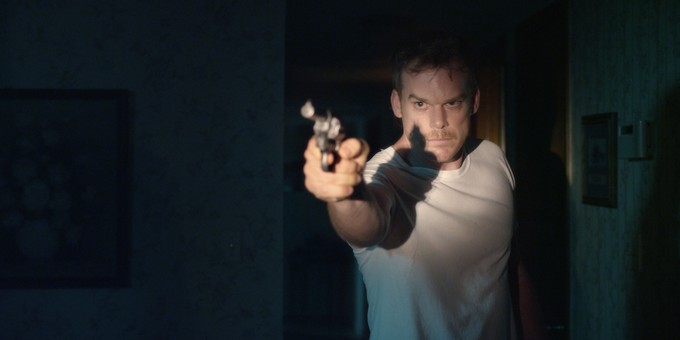 Ahoy, squirts! Quint here. Jim Mickle has been making a name for himself in the indie genre scene with flicks like Stake Land and the We Are What We Are remake. His movies have been getting progressively better and now we're at his Southern fried bit of a weirdness Cold in July which, in my opinion, is his best yet.

The movie opens with a loving husband and father blowing the brains out of a home intruder. I was going to say it starts with a bang, but even Gene Shalit rolled his eyes at that pun, so I decided against it... but I guess in telling you my original plan I get to have my cake and eat it too, don't I?

Dexter Morgan himself, Michael C. Hall, plays Richard Dane, the dude that opens the movie by killing an unwelcome intruder. He's not a killer and he shot completely out of fear and nerves, so when it comes to light that this guy wasn't even armed guilt settles in.

Okay, I thought. This is going to be the anti-History of Violence. The real consequences of a violent act on a gentle man. Cool, I can dig that. I don't know how they'll sustain it for a feature length runtime... Wait, the man he shot has a felon father who just got out on parole? Ohhhhh, shit.

Sam Shepard shows up as the home intruder's father and needless to say he's not very happy at Michael C. Hall. That was gear switch number one of many. It went from an introspective rumination on violence to a cat and mouse thriller as Hall has to protect his family from Shepard, who seemed to model his personality on Robert Mitchum's turn in Night of the Hunter.

And just when I was getting settled into that movie it switched gears again and did so another two or three times before the end. I can see this possibly turning some people off, but it's what made this movie special. It's rare to see a genuinely unpredictable film these days and Cold In July certainly is unpredictable. I guess I shouldn't have been surprised since this is based on a Joe R. Lansdale novel and that dude knows how to throw you for a loop (Bubba Ho-Tep, for instance).

It also helped that the movie pays loving homage to many different subgenres that I like as well as one of my favorites, the great Rolling Thunder.

What's really interesting is that Mickle seemed to alter the style of the film with each turn of the story. The score, lighting and shot selection all evolve throughout. I know that's what normally happens, but since there are some any curveballs the changes here are quite drastic. I mean, the score goes from melancholy piano to John Carpenteresque synth!

Hall and Shepard are both great, with Hall doing his best to not remind us that Dexter Morgan would very neatly slice and dice his way out of most of the tough situations that Richard Dane finds himself in during the course of the movie and Shepard turning up the confident menace to 11.

But the standout is a flamboyantly Texan PI named Jim Bob who drives a bright red convertible with longhorns mounted on the grill. None other than Don Johnson himself plays this guy and he's the whole package: smart, funny, goofy, deadly, ruthless and cunning. Such a fun character and the movie raises to a whole new level when he walks onscreen.

The flick looks great, the score is nice and big and it's unlike anything I've seen, so it wins points all around. Really dig this one.

Make sure to follow me on Twitter where I'll be tweeting immediate reactions to the movies and random weirdness I encounter while on the ground here in Park City!