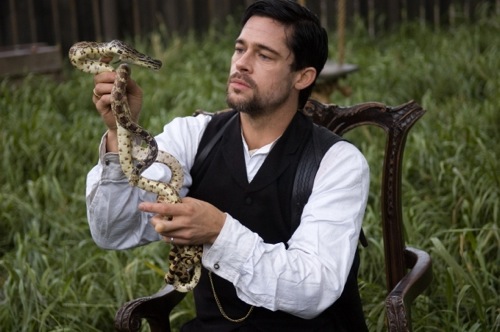 (This Saturday, December 7th, New York's Museum of the Moving Image will host a revival screening of Andrew Dominik's 2007 masterpiece THE ASSASSINATION OF JESSE JAMES BY THE COWARD ROBERT FORD. The event is a passion project for programmer Jamieson McGonigle and In Contention's Kristopher Tapley, and will make its way from city to city over the coming months. To help kick off the revival, Tapley asked a group of journalists to write appreciations of certain aspects of the film. This is my contribution.)

Jesse James was a lad
That killed many a man
He robbed the Glendale train
He stole from the rich
And he gave to the poor
He'd a hand and a heart and a brain
"They're all lies, you know."

Through skill, grit and no shortage of luck, the outlaw Jesse James had somehow made it into his thirties, living just long enough to not only become the printed legend, but to be regaled with the dime-novel exaggerations of his exploits by a curious young man named Robert Ford. He was a folk hero, a last-gasp middle finger to Reconstruction and the taming of the West, but with the Pinkerton detective agency and the whole state of Missouri obsessively chasing him him, James could sense that his tale was drawing to a close. Beyond collecting the handsome reward for his dead-or-alive body, there was an opportunity for immortality. No one else could be Jesse James, but someone could be the man who shot him. And this kid Ford was throwing off the wrong kind of energy at precisely the wrong time.

Andrew Dominik's THE ASSASSINATION OF JESSE JAMES BY THE COWARD ROBERT FORD is a strangely serene elegy for a vicious age, and Brad Pitt inhabits the condemned man of the title with a haunting grace. Given the mythic grandeur of Dominik's direction, Pitt is ideal casting: he's a glamorous, impossibly beautiful movie star whose real life has been romanticized all out of proportion. James needs to look the part of an American icon, and Pitt is one of only a handful of actors capable of emitting that warm, seductive glow while also conveying the weariness of a man worn down by his legend.

Though born in Oklahoma, Pitt was brought up in James's home state of Missouri, which may begin to account for the sense of communion in his performance. There's a lot that goes unspoken in the film with regards to James's emotional state, but the character's deep melancholy is palpable from the opening grass-field inferno. While the narrator adds some shading here and there, we're mostly on the outside guessing at James's motives; there's a good deal of calculation going on, but there's also an errant, unhinged quality typical of a cornered man. The smart play would be to disappear into domesticity with his wife and children, but James can't seem to scrape these last few transgressions - and shifty conspirators - off his boot. We learn just how desperate he is when he attempts to beat information out of Ford's young cousin: the boy won't give up any information, but James keeps laying into him; he's used to getting his way when he resorts to violence, but it's just not happening here. After he lets the kid go, he breaks down into tears. The world isn't bending to Jesse James's will anymore.

James has more success monkeying around with Robert and Charley Ford, but consorting with these hapless brothers is clearly below an outlaw of his notoriety. He is obviously goading them into some kind of action, but is he setting the stage for his own execution or does he foolishly believe he can bleed them slow once the time comes. James maintains the upper hand throughout (keeping the boys unnerved by watching them sleep), but he's rudderless. Again, he's an outlaw in his thirties, and his past is bearing down on him with a lynch-mob vengeance. His future's all used up. And don't that picture look dusty?

Pitt's Jesse James is an enigma - or maybe he's just a psychopath. Within the span of a minute, he'll veer from reveling in the glory of his myth to disdaining it. It's probably not intentional, but the performance can't help but feel like a callback to the serial killer Early Grayce in KALIFORNIA. That film hums with the charge of Pitt's charm and sex appeal; it's a bloody, transgressive turn-on . But Pitt's thirty-four-year-old Jesse James is a pensive murderer, a Missourian who can't find his way in the world now that Northern civilization has settled in; there's nowhere for him. In a way, THE ASSASSINATION OF JESSE JAMES BY THE COWARD ROBERT FORD marks a transition for Pitt from rowdy upstart to respectable adult. He's shedding his guns and accepting the inevitable: night riding is a young man's game.

For more appreciations of the film, check out Nick Newman's essay on Casey Affleck and Kristopher Tapley's interview with Roger Deakins. The final two pieces will appear at Film.com and Film School Rejects.