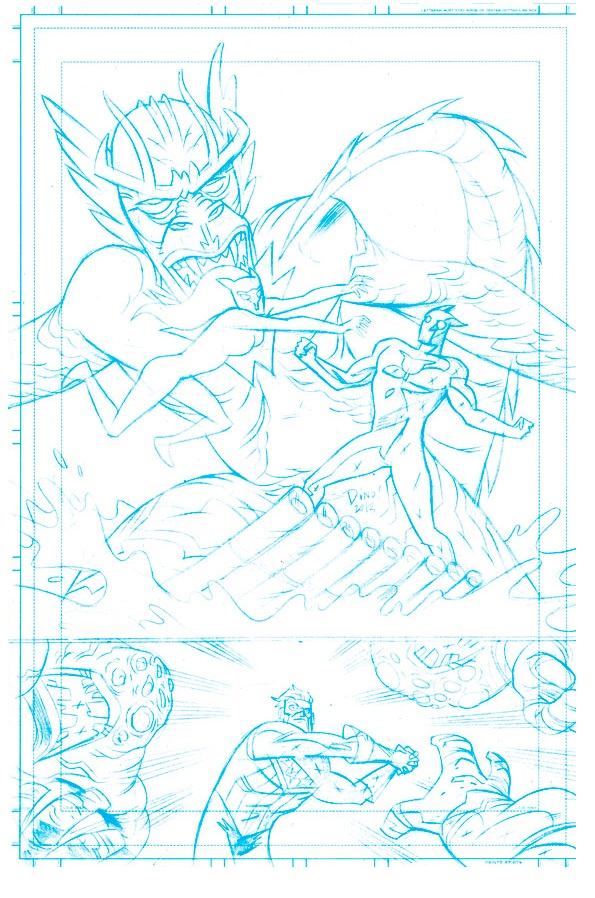 BottleImp here. In this reader’s humble opinion, Archie Comics hit it out of the park with their re-introduction of the Red Circle line of superheroes in last year’s NEW CRUSADERS series. Now the curtain is drawn back a little more on the universe of The Shield and The Comet to reveal a fresh take on Archie’s classic character The Fox. Artist and plotter Dean Haspiel teams up with scripter Mark Waid to bring a unique blend of retro and modern sensibilities to the character in a brand new miniseries. I got a chance to fire off some questions to the series’ creators—let’s see what they have to say!

BOTTLEIMP: What is your history with the Archie superheroes (The Fox in particular)? Were you familiar with the characters before writing this series? 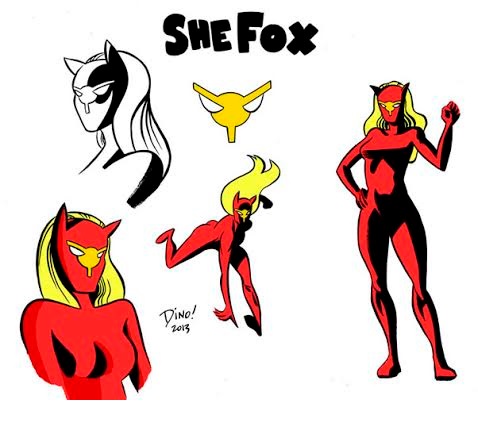 DEAN HASPIEL (DH): I was a fan of THE MIGHTY CRUSADERS from the 1980s when I bought 'em off my local newsstand and discovered Alex Toth's bold iteration of THE FOX in the back pages of a BLACK HOOD comic. And, then they...disappeared. I later discovered 1960s versions of ADVENTURES OF THE JAGUAR by Robert Bernstein and John Rosenberger, and a one year run of THE MIGHTY CRUSADERS by Jerry Siegel and Paul Reinman that featured the best/worst superhero team comic book covers I've ever seen but, honestly, helped inspire some of the spirit I put into our version of THE FOX. I also remember being quite fond of Mark Wheatley and Rick Burchett's BLACK HOOD in the early '90s when DC Comics published Red Circle superheroes under their !mpact Comics imprint.

MARK WAID (MW): Because I know more about the obscure Golden Age superheroes of yesteryear than I do about my own family, I was well-versed in all the Archie characters and have been since I was a young boy poring over tomes of comics history while the other kids were outside playing in the fresh air. But I get the last laugh, because I guarantee as an adult I'm enjoying what I do for a living more than those kids do today. 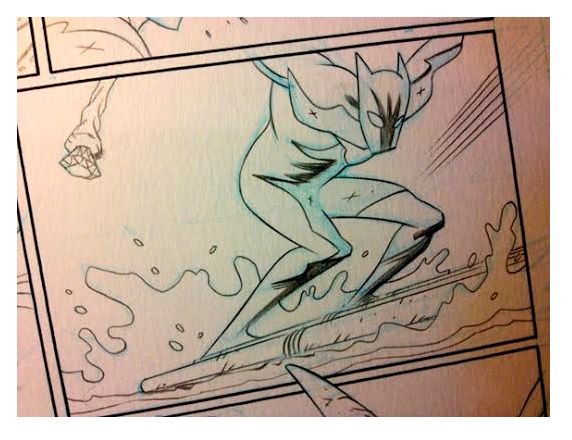 IMP: I love the sense of fun that THE FOX has in its storytelling—can you talk a little bit about how you keep the comic book balanced on that fine line between fun, exciting stories and goofy, can't-take-it-seriously frivolity?

DH: Thanks. It's hard to breakdown the formula of what makes our FOX comic tick but I can claim that it's a genuine mix of what I love about Golden and Silver age comic books, the tone and style of C.C. Beck, Will Eisner, Chester Gould, Buster Keaton, Preston Sturges, and Kolchak: The Night Stalker.

MW: I'm smart enough to draw heavily from the Giffen/DeMatteis 1980s Justice League tone. But seriously, that is a fair question, and it's not always easy—the readers have to understand that the Fox's sarcastic, kooky voice is a mask for his own fears when he faces some very dangerous situations. 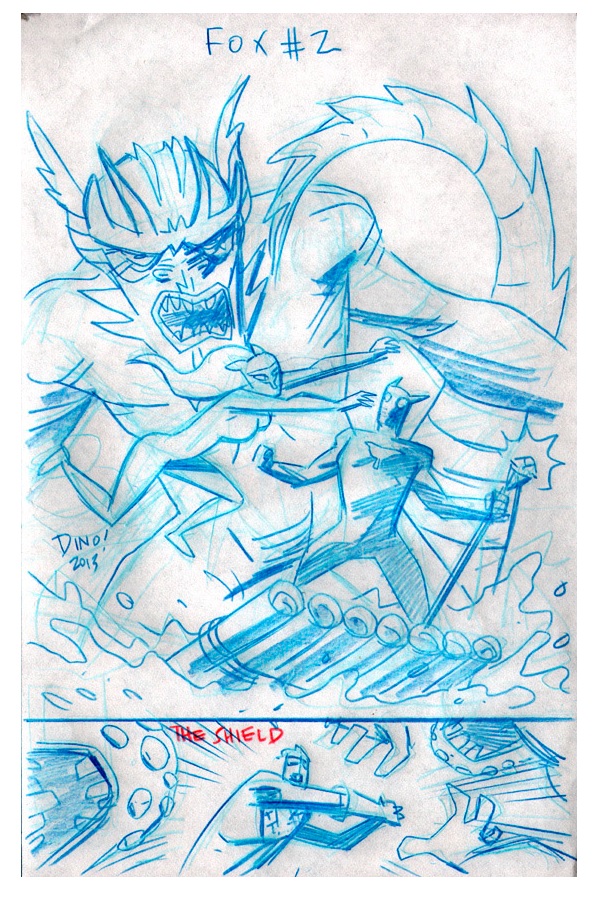 IMP: The subtitle of the miniseries is "Freak Magnet"—can you elaborate on the idea behind this concept?

DH: Paul Patton, Jr., the son of the original Fox, has taken up his father's legacy and done an okay job of getting into and out of trouble and, now that he has a wife and kid, including an estranged daughter, he just wants to quit the superhero biz and live a normal life. Only, he can't because he started something that can't be stopped. The Fox attracts antagonism likes bees to honey.

MW: Poor Paul Patton, Jr. He started wearing the Fox costume so he could draw the weird crooks out of the woodwork, but now it's like a switch he can't turn off—he just wants to retire the Fox identity and relax on his couch, but the bizarre bad guys won't stop parading his way! 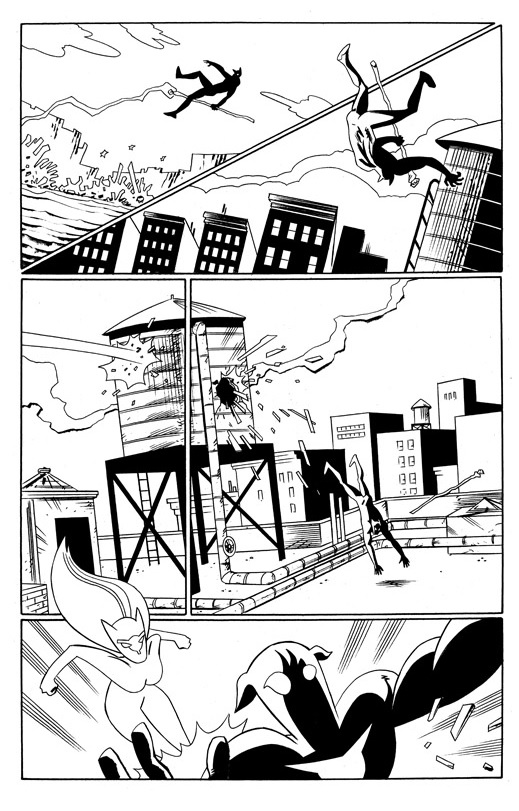 IMP: I'm getting the sense of a lot of influences on thIs book in terms of both story and art, but one of the strongest senses I'm getting (especially with issue #1's final splash page of the Queen of Diamonds) is a real Jack Kirby, early-FANTASTIC FOUR kind of feel. Am I right in thinking that Kirby is a big influence?

DH: Jack Kirby is my greatest influence when it comes to drawing superhero comics and I've been reading The Fantastic Four every month for 30+ years. Kirby expanded upon and set the bar for the superhero lexicon in the 1960s and 1970s, and with the exception of a handful of cartoonists (Walter Simonson, Frank Miller, John Romita, Jr., Mike Mignola, Erik Larsen), it hasn't been topped. When I decided to redesign The Queen of Diamonds, I looked no further than to Kirby's New Gods and Inhumans, coupled by some of the futuristic fashion of original Star Trek. And, I couldn't visualize half of what we've been able to achieve without the innovative colors of Allen Passalaqua.

IMP: Dean, what's your process like on THE FOX? Do you think of the story in terms of the visual beats, or do you devise the plot first? 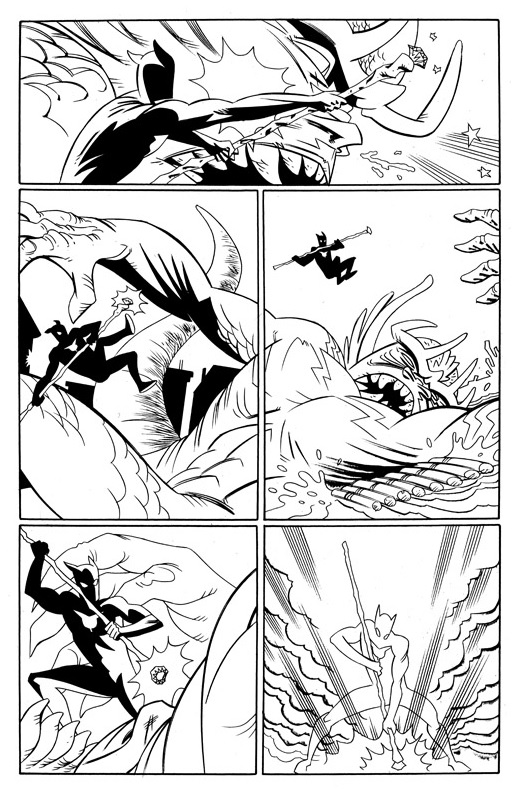 DH: I think about stuff I want to draw and then I write a tight but brief plot for the editor to scrutinize and eventually approve. Then I expand said plot into a page and panel breakdown of visual descriptions and occasional dialogue, including character motives. All the image cues and narrative beats are described and then I visually lay them out to make sure they work. Sometimes I modify a sequence in the layout stage because, frankly, comix are image-based and I serve the story better with my art than I do with my words. Luckily, Mark Waid makes my pictures sing with his words, spackles the holes, and glues everything together into a runaway train of adventure.

IMP: Mark, how does scripting a book like THE FOX, where someone else plots the comic, flex a different set of muscles for you than when you're handling both plot and script chores by yourself?

MW: It's very liberating; I'm not freaking out over the pressure of having to coordinate plot and story and dialogue all at once. Instead, I can let Dino's pix tell the story and add to them where necessary. What a relaxing gig. 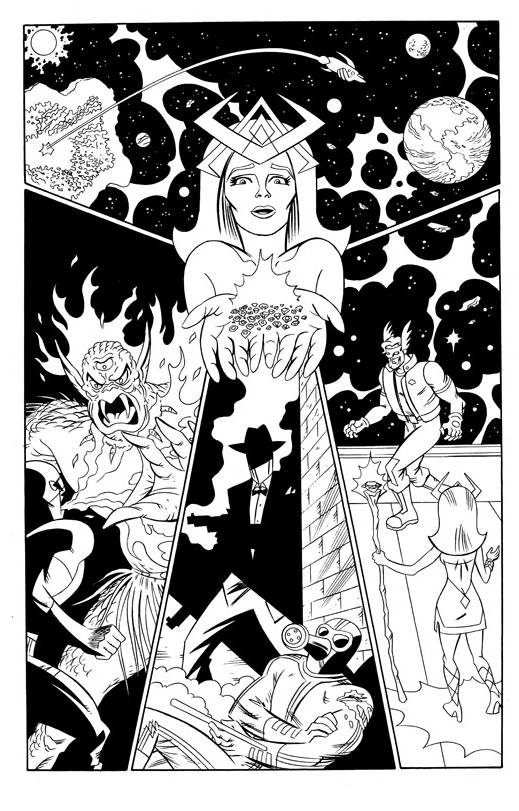 IMP: Do you see THE FOX miniseries being expanded into an ongoing series?

DH: YES. I already have a loose idea worked out for another big story arc that picks up right after "Freak Magnet." Then, I have an idea for a story with no words and no color. Plus, I want to explore the concept of married superheroes and how that affects their romance and domestic life.

MW: You tell us! And you can tell us by buying more copies!

IMP: The Fox obviously exists in the same universe as the New Crusaders. Will these two titles have any kind of crossover interaction? 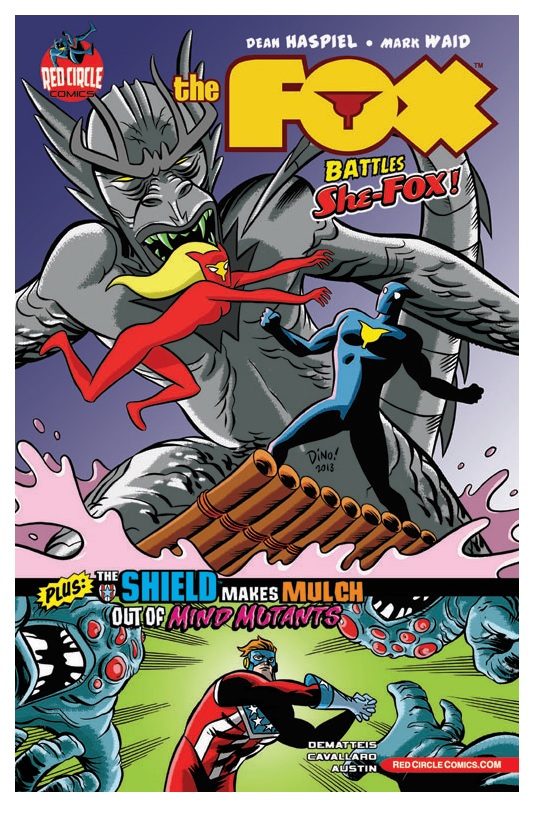 DEAN: I think that's the plan!

IMP: Finally, just what DOES The Fox say?

IMP: Big thanks to Dean and Mark! THE FOX #2 hits the stands December 4th—check it out for some classic, Kirby-esque comic book fun!