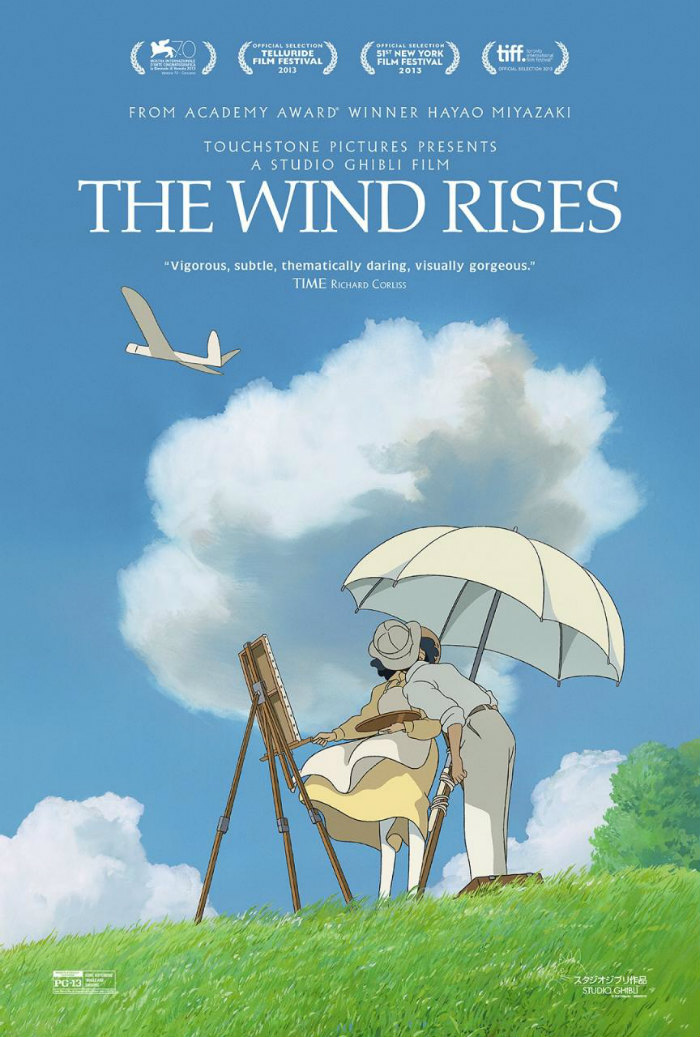 Hayao Miyazaki is a treasure, and the world will be less bright without his movies.  I hope that Miyazaki-san changes his mind about retiring, but if he does not, THE WIND RISES will still stand tall among his films, a story of passion, beauty, and art.  The films of Studio Ghibli have always been celebrations of life, exploring every facet, and always taking the road less traveled.  THE WIND RISES is no different, except to say that this feels like a subject very close to Miyazaki's heart - that the artist is a vessel, and the art that the artist creates finds life beyond them, perhaps in ways that the artist did not intend.  But that is the nature of creation.

Jiro Horikoshi dreams of flight.  He dreams of soaring above the clouds, in machines of his creation, to look down and see the splendor of Japan.  It is his everything.  Although Jiro is too nearsighted to be a pilot, he is smart, an artist and designer, and all he wants to do is build the perfect airplane.  He dreams of his inspiration, Giovanni Caproni, an Italian designer of airplanes.  Caproni tells Jiro that he has 10 good years in him to make something wonderful.  "Airplanes are beautiful dreams," Caproni tells Jiro.  "Cursed dreams."  Jiro is determined to go to university to become an aeronautical engineer.

Jiro knows that in pre-World War II Japan, the only way he will get to design airplanes is if he works with the government to make fighters.  But, Jiro figures, eventually the war will end, and his designs will help Japan, allowing its people to travel the world.  For Jiro, there is elegance in airplane design, and he imagines the simple beauty of a well-designed wing or strut.  When Jiro is on the way to university, however, the Kanto Earthquake of 1923 strikes Japan, devastating Tokyo and the surrounding country.  It is during this disaster that Jiro meets Naoko, and helps her and her maid reach safety.  Once Jiro reaches university, the building is on fire and in shambles, but Jiro and his new friend Honjo quickly learn their studies and get to work.

The Japanese economy is destroyed by the earthquake, and many citizens assume it will be a matter of time before Japan goes to war.  Jiro is not blind to what is happening in the world, but Jiro continues to work on what will become the Zero fighter plane.  He is still proud to be Japanese, and while he knows that his creation will be used in battle, he hopes that his designs will in the end help Japan. Eventually, Jiro and Naoko reunite and fall in love, but they are living on borrowed time.

THE WIND RISES is a retelling of the man who invented the Japanese Zero - while the details of the plane's creation are accurate, Miyazaki decided to tell the story of Jiro's personal life fictionally.  His Jiro is a good man, full of passion and kindness, and deep love for his country.  But he is not a man of war - when Jiro suggests that his plane will go so much farther without weapons, he is practically laughed out of the room by his colleagues.  For Miyazaki, these planes are wonderous pieces of art, soaring the clouds in splendor, and testimony to the greatness of Japanese engineering.  But they are also weapons of war, responsible for horrific atrocities and death.  Miyazaki never ignores this.

THE WIND RISES could be viewed by some as critical of Japan, and also a warning, considering recent events, against returning to the myopic outlook of the past, as nearsighted as Jiro's vision in seeing the details but purposefully ignoring the bigger picture.  But Miyazaki also portrays the Japanese as being able to accomplish anything, if they come together to do it.  In the aftermath of the Fukuskima disaster, Miyazaki has made a film about the solidarity of the Japanese people.  But Miyazaki also asks important questions - are we responsible for our creations?  For our art?  It is impossible to deny that Jiro's work not only helped Japan, but all of aeronautics, much like art continues to influence and shape those who come afterwards and experience it.  But that art, in the wrong hands, can destroy as easily as it can inspire.

But THE WIND RISES is also a triumph of Hayao Miyazaki's art.  THE WIND RISES is breathtakingly beautiful - from Jiro's dreams of flight, to character design and pre-war Japan.  I always love watching the machinery of Miyazaki's films - from the gears on a steadily-moving train, to the fanciful flights of his airplanes.  I also love how the airplane sounds are all human vocals - from the brum-a-rum of the engines to the tut-tut-tut of the propellers.  Miyazaki also shows the horrors of disaster in the depiction of the Kanto Earthquake, from the way the earth rumbles beneath the feet of the people who experienced it, to the burning debris in the air.  Miyazaki and his animators' attention to detail is flawless.  The animators at Studio Ghibli have outdone themselves yet again, and I hope they continue to make such works of art for many years to come.  Each frame could be hung in a museum.

THE WIND RISES is a quiet, contemplative movie, and while fans may see aspects from his other films in it, THE WIND RISES boldly makes its own statement about art and brings all of Miyazaki's past work into sharp focus.  Joe Hisaishi's score is beautiful and subtle, never undercutting the emotion but never going obvious, either.   Considering history and context, THE WIND RISES may be a difficult sell at best - this is a more adult story than PONYO or PORCO  ROSSO, and isn't fantasy like PRINCESS MONONOKE or NAUSICAA.  But this was a story obviously very close to Miyazaki's heart, and THE WIND RISES feels very much like a grand statement from Hayao Miyazaki about his own work and what art means to him.  All of his original films have explored the world in unique ways, looking at every possibility.  Even the enemies of Miyazaki's movies have facets to them, and his protagonists are never perfect, either.  Miyazaki is our great guide, showing us grace, wonder, and beauty, all the while exploring with us, always questioning, always seeking.  THE WIND RISES is a true work of art, and one of Hayao Miyazaki's best films.  It is a masterpiece.