The re-release trailer for Abel Ferrara's MS. 45 is packin' some heat! 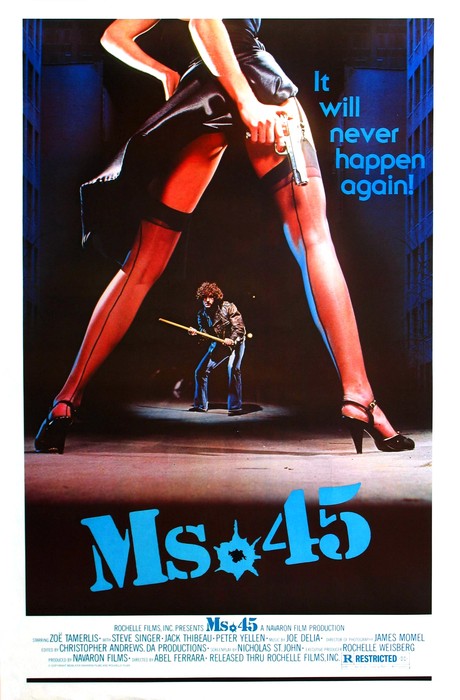 Never seen MS. 45? Don't blame you. The film, which KING OF NEW YORK director Abel Ferrara made in 1981 with only porno work and the grindhouse-y DRILLER KILLER under his belt, was barely released and, for the most part, was only seen in an edited version that removed several of the more brutal moments from the flick. Even in it's compromised form, MS. 45 is still a stylish, oft-shocking cult flick that manages to create 80 or so minutes of riveting cinema with very little filler and quite a scarce amount of dialogue. Nonetheless, Ferrara's uncompromised original vision has remained mostly unseen in the U.S in the 30+ years since its creation.

Until now! Drafthouse Films, coming off a successful run with the "WTF Cinema" flick THE VISITOR, is rereleasing the uncut version of MS. 45 into theaters, and has released the below trailer to announce the flick. They've concocted one cool, sexy piece of advertising to announce the flick's resurgence, which gets across the gritty pre-Giuliani New York feel of the film without ruining any of the more visceral, gut-wrenching moments. It's a smart play; first, they get you with the DEATH WISH-y rape-revenge imagery, and then, once your ticket's bought, they hook you with the intense, haunting story of this young woman who gets fed up taking the city's shit all the time. I can't recommend the film enough to fans of batshit, ballsy cinema, and I personally can't wait to check out this uncut, evidently gorgeous print of the flick.