Don Cheadle is set to make his directorial debut with an upcoming biopic about the life of jazz legend Miles Davis. The film, which has been something of a passion project for Cheadle for quite some time now, is set to take place in the late '70's, when Davis re-emerged on the music scene after a period of self-imposed retirement. 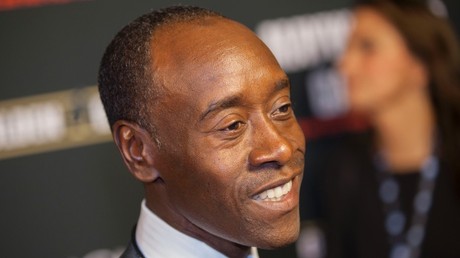 BiFrost films will produce, and the script will be co-written by Cheadle and Steven Baigelman. It will co-star Ewan McGregor as a reporter for Rolling Stone, and Zoe Saldana will play the trumpet player's former wife, Frances Davis.

I've loved Don Cheadle for just about as long as I can remember. He's proven himself to be a very talented and diverse actor, so I'm confident that he will have no problem taking on the role of the iconic musician. But I'm really looking forward to seeing what he can do behind the camera though, as this will be his first directorial effort.

Check out the press release below:

Los Angeles, CA (November 13, 2013)— Don Cheadle, Ewan McGregor, and Zoe Saldana will star in BiFrost Pictures’ KILL THE TRUMPET PLAYER, it was announced today.  KILL THE TRUMPET PLAYER tells the story of a few dangerous days in the life of Miles Davis, the virtuoso, fighter and genius, as he bursts out of his silent period and conspires with a Rolling Stone writer (McGregor) to steal back his music.

Cheadle will play Davis and will make his feature directorial debut from a script co-written with Steven Baigelman.
BiFrost principal Daniel Wagner is financing and will produce the project along with Robert Ogden Barnum, Cheadle and Lenore Zerman for their Crescendo Productions banner, Darryl Porter, and Vince Wilburn Jr. Executive producers are Pamela Hirsch, Cheryl Davis, Erin Davis, Cassian Elwes and Baigelman. Herbie Hancock, a legend in his own right and close collaborator of Davis, will participate in the project as well. The project was packaged by UTA which arranged the financing and is representing U.S. rights. Leading international films sales company IM Global is handling international distribution and will be introducing the title at the upcoming American Film Market.

Wagner commented, “Don is one of our generation’s greatest actors, and this is the role he was born to play. His take on the conventional biopic of one of music’s most celebrated icons is cinematic “jazz” and too unique to resist. It fits naturally with BiFrost’s commitment to support talent and their passion projects, so we are thrilled to work with Don on his feature directorial debut.”

Cheadle is best known for roles in CRASH, Steven Soderbergh’s OCEAN'S TWELVE and OCEAN’S THIRTEEN, as well as for his Academy Award-nominated performance as Best Actor in 2004’s HOTEL RWANDA.  He has most recently been seen as Colonel James Rhodes in IRON MAN 3 and as Marty Kaan in the Showtime series “House of Lies,” for which he won a Golden Globe in 2013. Cheadle is represented by UTA.

McGregor is best known for his roles in THE IMPOSSIBLE, GHOST WRITER, BEGINNERS, MOULIN ROUGE, TRAINSPOTTING and the STAR WARS franchise.  McGregor was nominated for a Golden Globe last year for his work on the feature SALMON FISHING IN THE YEMEN.  He will next be seen in the crime drama SON OF A GUN and he is currently shooting MORTDECAI opposite Johnny Depp and Gwyneth Paltrow.  McGregor is represented by UTA, Sloane Offer and United Agents in the UK.

BiFrost Pictures’ current slate of projects include Paul Bettany’s directorial debut SHELTER, with Jennifer Connelly and Anthony Mackie; THE GIRL WHO CONNED THE IVY LEAGUE, to be directed by Rob Epstein and Jeffrey Friedman and starring Amanda Seyfried; and the recently completed THE WORLD MADE STRAIGHT, directed by David Burris and starring Minka Kelly, Haley Joel Osment, and Noah Wyle and based on the award-winning novel by Ron Rash.