Do we now know who is going to play Hank Pym and Janet Van Dyne in Marvel's ANT-MAN!?!? 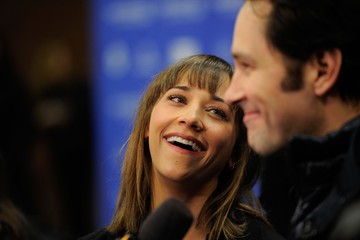 The news just keeps on coming today. In a follow up to a report last week that the role of Hank Pym was down to Joseph Gordon-Levitt and Paul Rudd, it now sounds like Marvel has made their choice. According to Schmoes Know (who were right on the money with their BEETLEJUICE rumor) Paul Rudd is very close to signing on and may have already, to star in Edgar Wright’s film.

But wait, that’s not all, as Schmoes Know has also confirmed an earlier report from Superhero Movie News, that Marvel has also decided on Rashida Jones for the role of Janet Van Dyne. She reportedly won’t transform into her comic alter-ego, The Wasp in this film but will in the future. Their source said this regarding the role,

“Janet will be a love interest and a major supporting character, we would see multiple references to her future as The Wasp throughout the film.”

I think this is all terrific news. Paul Rudd is a really fantastic choice and he showed great chemistry with Rashida Jones in 2009’s I LOVE YOU MAN. They both are so damn likeable and each have a ton of charisma that should fit really well with Wright's style. If this rumor is true, I think Marvel has just hit another home run when it comes to the casting of their films. I have a really hard time seeing this project fail. Stay tuned though as official confirmation of this rumor is supposedly imminent.