We’re getting down to the nitty gritty of the countdown and number 8 is one of the most original and mind-bending films of the year. RESOLUTION is the type of film that will make you think and pay attention, but by the end of the film, you can’t help but give it props for doing something you haven’t seen before. Justin Benson & Aaron Moorhead are two talented dudes and I can’t wait for what else they have in store for us in the coming years. For now, we have RESOLUTION coming in at Number 8. 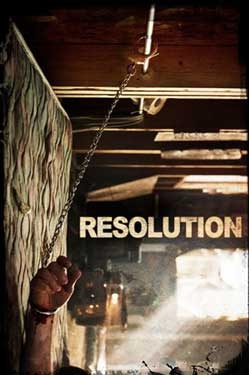 High school buddies Michael (Peter Cilella) and Chris (Vinny Curran) have been friends forever, but while Michael has married, expects their first daughter, and is becoming successful in his life, Chris has developed a drug problem and hangs out at the edge of town doing crack in an abandoned house and shooting at birds. After receiving a video message that Michael feels is a cry for help sent by Chris, he sets out to break him of his unhealthy crack habit by locking him in a cabin for a week to sober up. Being a good friend, Michael decides to wait it out with his buddy through this tough time. 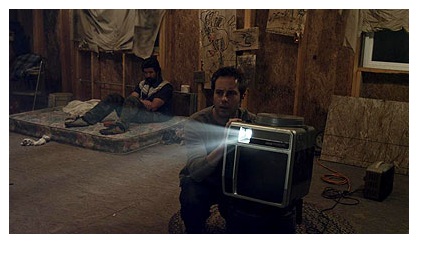 That was the plan anyway. But soon tings start going sideways. There happens to be a mental hospital nearby and the patients tend to escape from time to time. The house is near a Native American ceremonial ground and the local tribe isn’t too happy Mike is squatting there. And what about the mysterious books, videos, films, and recordings that keep showing up? And where’d that knife come from?

While this can be easily dismissed as a story of consensual descents into madness, that’s not really what’s going on. This film gets insane with time twisting, choose your own adventure style antics going on from some unseen force. This film goes through a tremendous amount of crazy shit, especially towards the end as Mike and Chris try to outrun fate which they have already experienced.

The premise of this film, which I won’t completely reveal here nor do I completely understand it having just seen the film once. Is ballsy and original. There’s a slice of MEMENTO, some TIME CRIMES, and maybe a dash of LOOPER going on here, though it keeps things much smaller than that. The film also reminds me of the of THE CORRIDOR (reviewed here), another story about unseen forces manipulating a friends in diabolical ways. 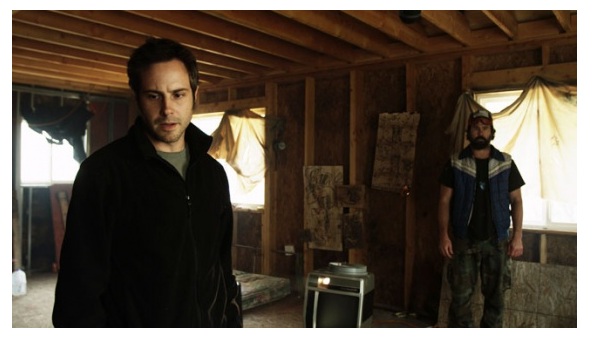 What makes this film work so well are the performances by the two leads. Peter Cilella as Michael embodies a purely good intentioned person, too blinded by his good deeds to notice he’s walking into trouble. Vinny Curran’s Chris is fantastic as the pitiful, yet quite personable and funny crack addict who still has the charm that made his friendship to Michael so strong in the first place. Both of these actors play the roles subtly, down to earth, and keep things very real in their reactions to the crazy events going on around him. I’ve gotta mention Bill Oberst Jr. (last seen scything zombies as ABRAHAM LINCOLN VS ZOMBIES reviewed here) ) who makes an appearance as a strange scientist with connections to the weird property Michael has chosen for this particular intervention with his friend. His cold stare and bizarre giggling monologue about the paranormal is absolutely riveting.

You have never seen a horror movie like RESOLUTION. I guarantee you that. The filmmakers Justin Benson & Aaron Moorhead are able to tell an ingeniously creative and spooky story with a ramshackle cabin, some old video footage, some weird locations, and just a few suggestions of something-not-right here and there. Both a testament to the effectiveness of low fi horror and a marvelous achievement in doing something completely original, RESOLUTION is bound to be a memorable experience for all who watch. Fantastically acted and subtly horrific, you’ve got to make a resolution yourself to see this film.

Want more cerebral fornication? How about JOHN DIES AT THE END? I want to recognize JOHN DIES AT THE END (full review here) for the achievement that it is and give props to Don Coscarelli for making a film that many felt was unmakable. I liked a lot of the parts of this film, but that’s basically what this film felt like; puzzle pieces just loosely fitting together and for me, that wasn’t enough for me to give it a spot on this countdown. Still it’s a fun movie to turn your brain off and soak in the visual buffet mind-fuck that it is.