Mr. Beaks Talks To Mike Dougherty About Beyond Fest's Special Screening Of TRICK 'R TREAT, Live Streaming On A Computer Near You This October 28th! 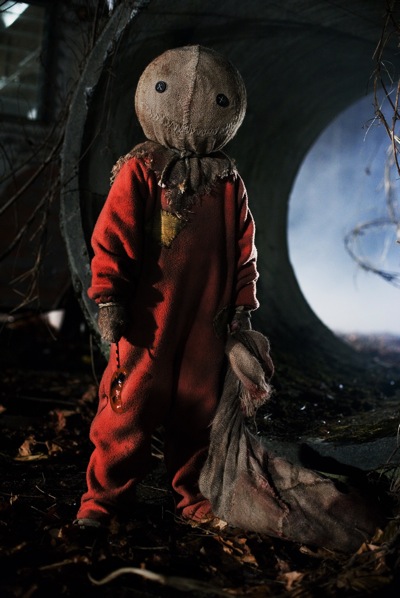 Over the last half decade, Michael Dougherty's anthology film TRICK 'R TREAT has slowly gone from tragically mistreated curiosity to bona-fide Halloween classic. Initially shelved by Warner Bros for two years, the film was released direct to DVD in 2009 and was immediately embraced by horror fans hungry for a movie that wasn't attempting to emulate the popular formula of the day. TRICK 'R TREAT was a heartfelt throwback to the fun horror of the 1980s, recapturing a bit of that Amblin innocence while still delivering big, satisfying scares. Though it never got a chance to make its case via theatrical release, the fact that it is routinely one of the top Amazon rentals over the holiday season proves it's connected with mainstream audiences as well as horror fans.

If you've always wanted to have a theatrical experience with TRICK 'R TREAT, Beyond Fest and Legendary Pictures have something pretty cool in store for you. As the fest's closing night selection on October 28th, Mike Dougherty and some of the stars of the film will appear at a special screening of the film at Hollywood's Egyptian Theatre. If you don't live in Los Angeles, you're wondering what's so cool about that, right? Well, Legendary is going to live-stream the screening and the post-film Q&A on its Facebook page for free. So you'll get to scream and laugh with hundreds of moviegoers in the comfort of your own home.

For more information, visit Legendary's official Facebook page. In the meantime, Legendary thought it would be cool to promote the screening by making Dougherty available for a few interviews. Fortunately, they thought of AICN (which hosted the film's unofficial premiere at Butt-Numb-a-Thon in 2007), so here's a fun little look back at the surprise success of TRICK 'R TREAT, and what sets the film apart from modern horror movies. Dougherty is, as ever, a smart and insightful fellow. Here's hoping we get more horror films out of this guy sooner rather than later. I know what you're thinking, and, yes, we discussed the possibility of a TRICK 'R TREAT 2. To find out if that's in the offing, you'll have to read on... 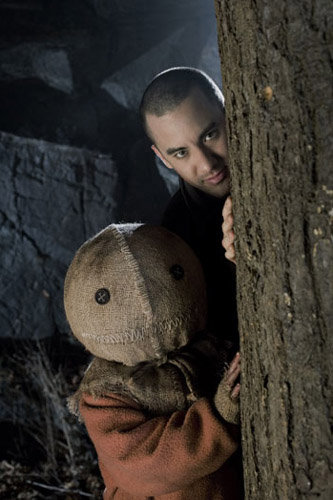 Mr. Beaks: It's four years now since TRICK 'R TREAT came out on DVD, and it really has caught on with horror films. But there's also been a gradual build it seems with regular viewers. How have you perceived its increase in popularity over the years.

Mike Dougherty: I'm stunned. It's gone from being a movie that I felt like nobody believed in to a movie that horror fans found and embraced. What I'm watching and seeing now is exactly what you said, is that after we hit the four year mark, it's suddenly going more mainstream. What's really fascinating to me is that every Halloween, once we hit early- to mid-October, it spikes into Amazon's Top Ten. For a movie that's four years on DVD now, for that to happen is really, really rare. I'm flattered and touched, and I just don't know of a movie that's had a journey like this.

Beaks: It is strange. With films that get shelved or delayed, there's always that stigma where people think, "There must be something wrong with this movie." When it was shown at Butt-Numb-a-Thon in 2007, it just blew everyone away. People were like, "Why are they sitting on this? It's great!" In terms of the film gradually getting a viewership, it just had to overcome this sense of "why has it been sitting around for so long?"

Dougherty: And I've kind of enjoyed the slow burn, I have to admit. It's one thing when you do a tentpole movie; whether it's X-MEN or SUPERMAN, you have this sort of $100 million marketing budget that you know is supporting your movie, so everyone and their grandmother is going to hear about your movie. Something like this, which is very small and had a lot of handicaps and just didn't have the same support, for it to sort of climb its way up and out into public knowledge, it feels good. It feels more pure, because you know it's not a marketing machine that's forcing people to know about it or like it. You know that it's only happening because of word of mouth and people people's true passion for it. It's people telling their friends "Let's get together and watch this." To me, it makes the movie cooler.

Dougherty: It's funny because I wrote it in 2001, and back then everyone wanted SCREAM knockoffs. So it was all about five pretty teenagers, like I KNOW WHAT YOU DID LAST SUMMER. When the script went around initially, the studio feedback was "This has vampires, werewolves and zombies. No one wants to see those!" I will never forget. People were saying it's dated. "Vampires, zombies and werewolves are over. It's all about slashers and torture porn." And look where we are now: you can't swing a dead cat without hitting fricking vampire TV shows, movies, what have you. It's to the point where I'd say their time is done. But I think this film still stands apart from those, too, because what it has is a very sort of tongue-in-cheek, fun feel to it that we're still missing in a lot of our horror movies these days. For me, it was almost a tribute to THE TWILIGHT ZONE and Amblin films, which had a very unique approach in the storytelling and, again, to this day we don't really have anybody who's doing that.

Beaks: But a lot of people are trying. They get the anamorphic lenses out, they do the lens flares and they try to evoke that warm Amblin feeling we had when we watched those films back in the '80s. It's really hard to do. What do you think is the secret to evoking that style of filmmaking?

Dougherty: I think it's a willingness to be vulnerable in a weird way. It's being daring enough to include innocence in your movie and not always go for harder, edgier, darker, grittier... you know what I mean? It's that balance. If you look at GREMLINS, POLTERGEIST, any of our favorite films - even THE EXORCIST, THE OMEN or ROSEMARY'S BABY. There's a really perfect yin-yang balance between your darkness and your light. You're given the breathing room to develop your characters so that they're likable people before the horror starts. I feel like that's what we're missing in our genre films. Everyone thinks it's about harder, darker, bloodier, but that to me just becomes shocking, not necessarily frightening. And it doesn't create something that resonates. The reason we really like THE EXORCIST, as much as we enjoy the head-turning effects and the vomit... as human beings, the reason we like that movie or POLTERGEIST or GREMLINS or any of the classics is you care about the characters. You care about their relationships and whether they're going to survive this or not.

Beaks: Especially with GREMLINS or POLTERGEIST, I have a ten-year-old nephew, and we were talking about those movies a few months back. He didn't seem too big on watching them, but I told him "It's fun to be scared." With movies like those, and I think TRICK 'R TREAT does the same, you know you're going to be scared, but at the end of it you won't be scarred. You'll have enjoyed it.

Dougherty: There's a mischief. I think that's almost the key ingredient. The ghosts in POLTERGEIST were mischievous. One of my favorite scenes is when they open up the bedroom and all the toys are flying around, and there's frickin' the Incredible Hulk riding a pony in the air. They're ghosts and, yes, they've kidnapped a child, but they're clearly having a party up in the kids' room. I feel like a lot of horror films forget to have some fun.

Beaks: How do you feel about Sam becoming something of a horror icon? On Halloween, do you go out walking around and see maybe a Sam or two?

Dougherty: I personally haven't come across Sam, but every year my phone lights up with people who are crossing paths with him. Last year, Bryan Singer went to New Orleans for Halloween, and there was a guy in an adult-sized Sam costume walking down the street drinking a Bud Light. Bryan sent me a picture of the guy in his costume, and the guy didn't know who Bryan was at the time, which is funny. But he had made both heads. So I experience it through a lot of other people, and to me I just watch him growing like a proud parent. It's really flattering and touching and neat to see how people have embraced him as a mascot whether they know the movie or not. He's almost a gateway drug to the film itself.

Beaks: You've had the opportunity to bring Sam back a few times since. You've also talked about a sequel. Are there any plans for a new anthology?

Dougherty: It would be neat, but I'm kind of not focused on that at the moment. There's this screening coming up on the 28th that I'm really excited about, so I think it'll be a whole new way for people to experience it online for free, and they can tune in for the Q&A afterwards. It'd be neat, but right now I feel like I'm still taking in the amazing reaction the first film got.

Beaks: In terms of other projects horror-wise, what would you like to do with the genre going forward?

Dougherty: That's the thing: based on what I've learned off this film, I feel like I know the kinds of horror movies that I want to make now. I know what I think I'm really good at, and for me it really is trying to make movies similar to the ones that we grew up and loved and were inspired by. But I'd rather make a new batch of movies like those instead of a bunch of remakes. So whether it's movies similar to GREMLINS or POLTERGEIST or E.T. or things like that... because I've got a two-year-old nephew now, and I'd love for him to grow up watching these fun, twisted horror films. I'm finishing up a couple of scripts now, and we'll see. I think there's something cool about the low- to mid-range horror film. I think CABIN IN THE WOODS is a great example of something that captures that tone.

Beaks: That seems to be the sweet spot for horror.

Dougherty: Yeah. And people forget that. They're like, "People like THE WALKING DEAD because people are putting spikes through zombies' heads." And it's like, "No, it's not that guys."

Beaks: So at this screening in a couple of weeks, with a crowd of people excited to watch the movie, what's the one reaction you always look forward to watching this film with an audience?

Dougherty: Laughter. I love it. Whether it's nervous laughter or laugher from a genuine joke... I find screams and laughter mixed together is one of the most amazing sounds.

You'll have to join Dougherty and a sell-out crowd at the Egyptian on October 28th to hear the screams and laughter for yourself. Again, check out Legendary's official Facebook page for more information on the event.