Sliding into the number 18 spot is V/H/S/2 which I personally thought was stronger overall than the original. The film continues to be a mixed bag in terms of quality, but overall the film seemed to use the found footage motif in stronger ways. Here’s my review of the film from earlier in the year. 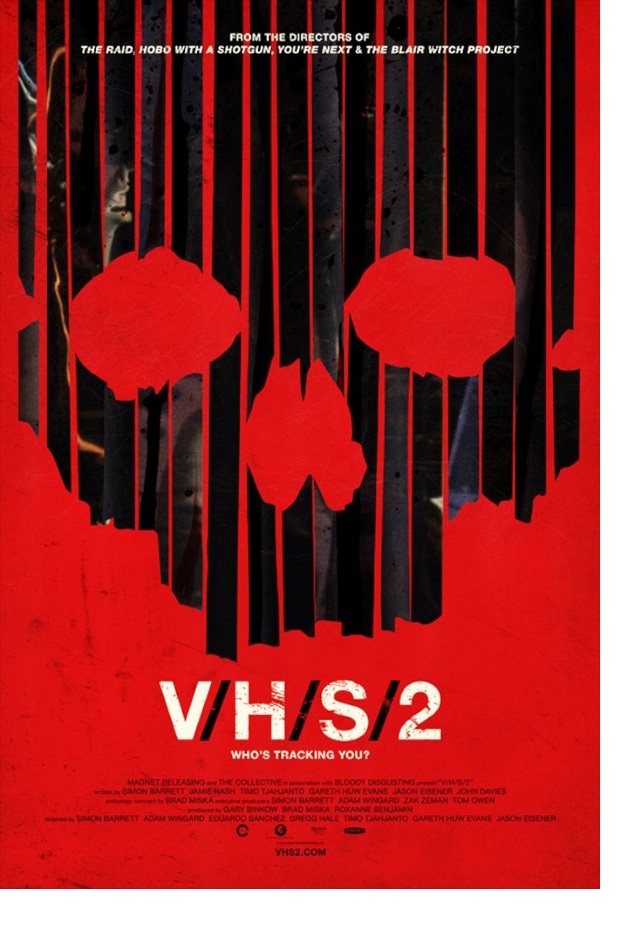 V/H/S hit last year and thrilled many. I was one of the ones who liked the film but also felt that the logistics of the film were a bit off and some of the entries would never hold up on their own. All in all, I loved the first “I Like You!” sequence and really liked Ty West’s creepy nighttime invader story, but the rest left me with that “That’s it?” feeling upon completion. Kind of when I first lost my virginity. 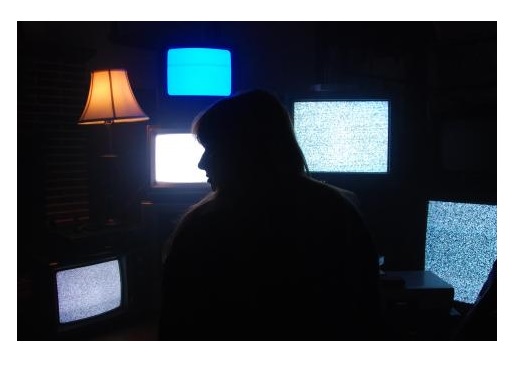 Sequels can go either way. Either the filmmakers go for bigger and broader, thinking they can just redo the same old jokes and jolts and fool audiences that they are watching a different movie rather than a rehash. Or they can go the other route and veer off into new territory and risk losing the audience they built in the first place.

A smarter route, and this seems to be the route this sequel took, listens to the critics of the first film and tries to make some improvements on the formula. Since the EIC of Bloody Disgusting itself is a part of the production of the V/H/S series, one would think that criticism of the original would be considered and it really feels like that was the case. My first problem with the first film had to do with logistics of the concept. Why would someone go to the time to convert all of this footage taken by computer cameras, digital cameras, and security cams and convert them to VHS videotape. In this one it’s stated right from the beginning that the video tapes are a product of what looks to be some kind of underground snuff type film ring for those looking for extreme viewing. As a private investigator tracks down a missing person who happens to have a collection of these tapes in his apartment, all I needed was that tidbit of explanation and I felt much better going on this ride. Sure it’s a tiny detail, but it really felt as if a plot hole was filled with that and the believability (in terms of the film world it takes place in) felt stronger. 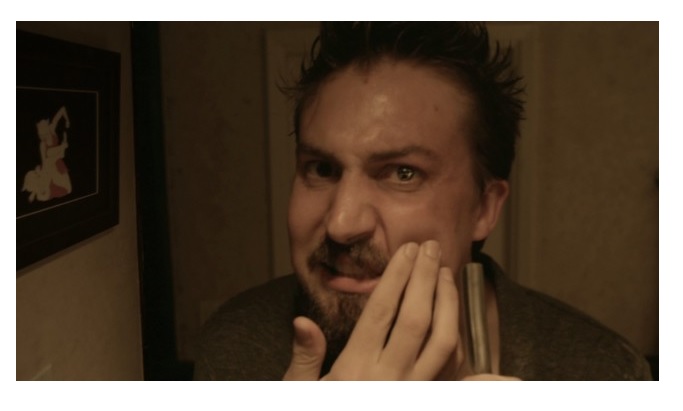 The first tape viewed was the most difficult to swallow given the sci fi aspect of it all. The whole short is viewed through an artificial eye which records what the patient sees. If we were using TV analogies, this segment is more TWILIGHT ZONE than the NIGHT GALLERY feel to the rest of the film. Still this segment provides a lot of jump scares that I admittedly fell for every time. This is mostly because of the acting of the eyeball camera operator who is actually the director of the segment as well YOU’RE NEXT’s Adam Wingard. Wingard is both believable in the role, but is also quite funny throughout as I loved the way he retreats to the bathroom every time he gets scared. Every single time, which to me was freaking hilarious. 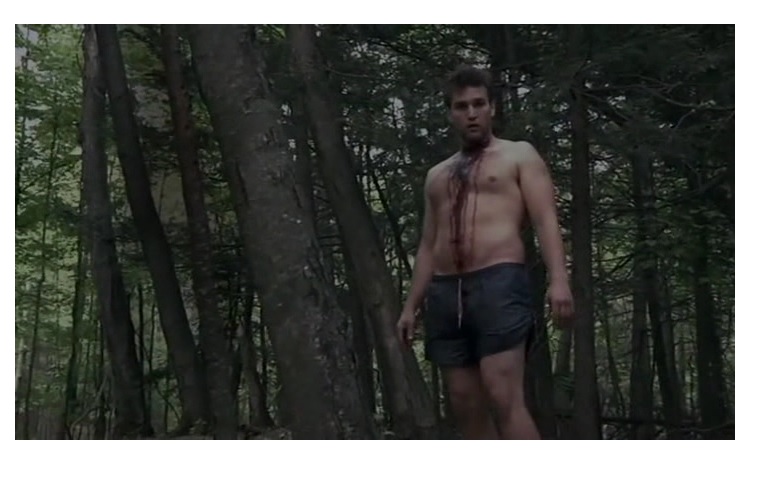 Segment two is especially interesting to me since it, I believe for the first time, gives a first hand account of the zombie apocalypse as seen though the eyes of the infected. The segment starts out as a biker sets up a camera to film some extreme biking, but after he stops to help a screaming woman, he finds himself bitten and soon transformed into a zombie. I have to give BLAIR WITCH PROJECT’s Eduardo Sanchez & Gregg Hale credit for coming up with a wholly original concept when it comes to zombies, since I didn’t think that was possible anymore. This segment is a hell of a bloody good time with all sorts of twists and turns you never thought you’d ever see. 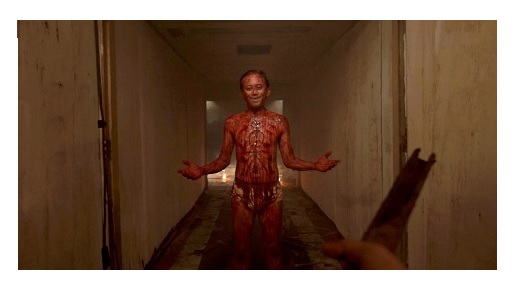 The third segment is by far my favorite by THE RAID’s Gareth Evans and Timo Tjahjanto which surprised me at the depth of the story as well as the levels of grue and perversity it attains in such a short time. This one is much more straight up found footage than the rest, but it feels absolutely fresh nevertheless as a documentary film crew convinces a cult leader to let them enter his sanctuary and film his cult during its day to day activities which include praying, doing chores, and studying the four R’s (reading, ‘riting, ‘rithmatic, and ritual suicide!). When the shit hits the fan it comes in horse loads and this slow starter drenches every inch of the screen in layers and layers of blood and viscera. There are crazed cultists, exploding holymen, and giant demon babys running amok in this ADHD, speed injected, cranked to ten of a little segment. 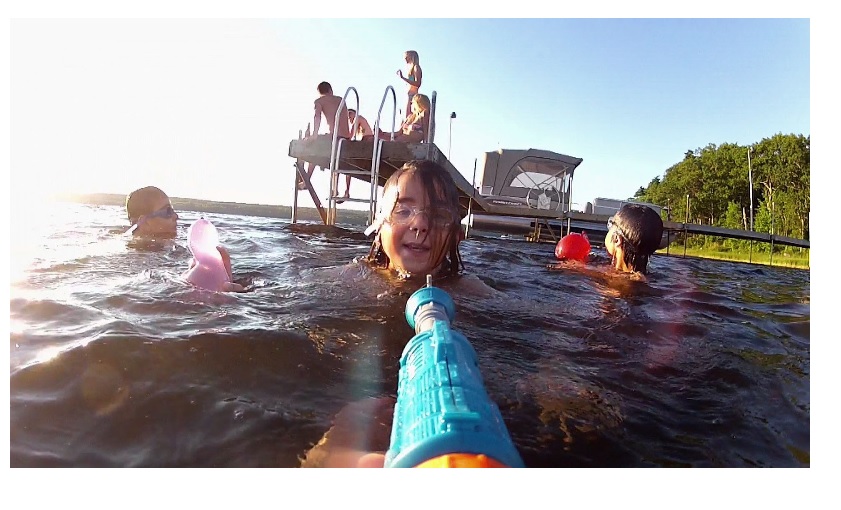 The next tape doesn’t really give you a chance to catch your breath as Jason Eisener throws us into the middle of an Alien Abduction Slumber Party. If HOBO WITH A SHOTGUN and Eisener’s ABC’S OF DEATH segment “Y is for Young Buck” didn’t make you think the filmmaker is cut from the maddest of stuff, this one will seal it. While it’s more subdued, Eisener’s use of sound and happenings in the background make this one worthwhile as some ornery youngsters film their sabotage of their sister’s date at their summer home, but when the camera gets placed on the dog’s head and aliens decide to attack, all of the tomfoolery stops and the joyous screams of terror begin. Though I have to admit, the dog in this film is the most calm pooch I’ve ever encountered as it never really acts like a dog most of the time and keeps a steady bead on the action going on. This fact brings you out of the story since it feels as if the camera is unrealistically pointed at stuff you need to know instead of stuff being actually being caught on tape. With all of the alien blowhorns and sirens going off, any real dog would be darting in circles, chasing its tail and shitting itself, but this pooch keeps the camera steady.

The film ends much more effectively than the last one with some creepy sequences reminiscent of THE EXORCIST and EVIL DEAD. While I don’t think this series has really reached its fullest potential yet and the sheer number of found footage films working against anything done in shaky style, V/H/S/2 is far superior to the first one. It’s gorier, bigger, and seems to be better threaded together. Though a little behind the backstory of the tapes is revealed, not enough is done so to demystify the concept. As long as the makers of this series continue to find top tier talent in horror to shake the camera and make it feel as real as possible, I’ll be a fan of this series.

Finally available on DVD and digital download is COMFORTING SKIN ( full review here), a haunting and mesmerizing tale of dire loneliness and despair. Superbly acted by lead actress Victoria Bidewell, this one is not one of the most chipper of horror tales, but it’s one of the best. It appeared in previous countdowns, but has never been available until this year, so I figured I’d mention it again for those looking for it.

Number 31: TEXAS CHAINSAW 3D!
Number 30: DEVIL’S PASS!
Number 29: THE RAMBLER!
Number 28: THE AMERICAN SCREAM!
Number 27: BATH SALT ZOMBIES!
Number 26: MANBORG!
Number 25: ERRORS OF THE HUMAN BODY!
Number 24: SIGHTSEERS!
Number 23: ABC’S OF DEATH!
Number 22: THE LAST WILL & TESTAMENT OF ROSALIND LEIGH!
Number 21: I DIDN’T COME HERE TO DIE!
Number 20: THE CONJURING!
Number 19: COME OUT AND PLAY!
See ya tomorrow, folks, as the count down continues with the best of the best covered in AICN HORROR over the past year!