The phenomenon that is Makinov blew my socks off with COME OUT AND PLAY, a retelling of the classic horror film WHO CAN KILL A CHILD? The story is basically the same, but the gritty way this one was filmed and the sheer impact of the violence that occurs will definitely shock those who are easily shocked. Hell, I feel like I’ve seen it all and it startled me at the level of violence this one reaches. 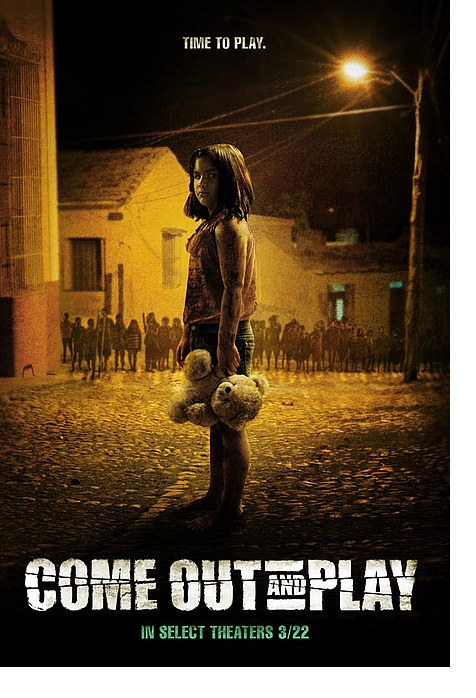 My favorite movie of the week will also most likely be very high up on my best horror films of the year list I post every October here at AICN HORROR. I’ve heard of the 1976 Spanish film, EL JUEGO DE NINOS (WHO CAN KILL A CHILD) before, but had never seen it. Knowing it was about a city of children who suddenly turn on every adult in the city, it felt too familiar with other kids on a rampage films such as THE BROOD, VILLAGE OF THE DAMNED, THE CHILDREN (reviewed here), and CHILDREN OF THE CORN. Now that I’ve seen COME OUT AND PLAY, I feel the undeniable urge to go back and watch WHO CAN KILL A CHILD, the film COME OUT AND PLAY was remade from.

COME OUT AND PLAY feels like CHILDREN OF THE CORN set in the tropics with a dash of Gareth Edward’s MOSNTERS thrown in. Francis (Ebon Moss-Bachrach) and his pregnant wife Beth (Vinessa Shaw) are getting away from their work and kids to South America before the baby arrives. Though they are taken with the culture, they want something a bit more relaxing and serene and rent a boat to go to a more secluded island. Arriving on the island, they are greeted by smiling children on the docks, but as they venture further into the island, they find no adults at all and kids slinking in the background. Soon the kids show their true colors and, packed into an angry mob, they pursue Francis and Beth across the island and back.

What makes this film work so effectively is triplefold. The actors, Moss-Bachrach and Shaw, are very talented and you believe that not only are they very much in love, but they are also very much afraid of this predicament they have found themselves in. Moss-Bachrach has a Michael Caine quality about him. Maybe it’s because I recently rewatched THE ISLAND (reviewed here), but the way he sweatily and frantically runs through the empty dirt streets made me think of the thespian. 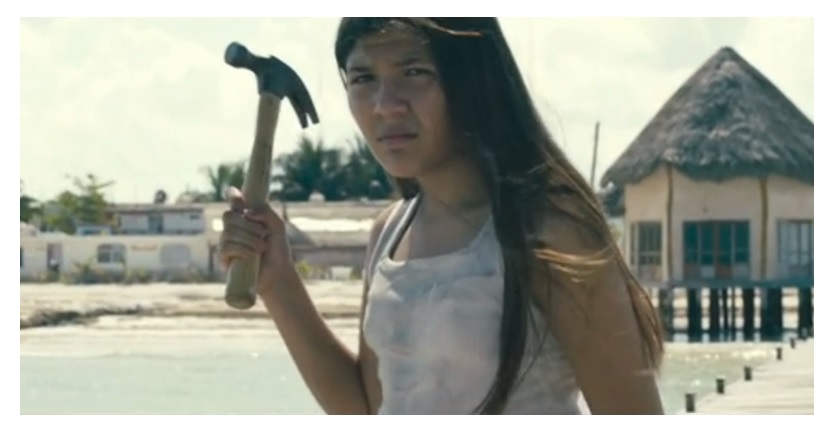 Director/writer Makinov does a good job of peppering in the horror early on, and if you didn’t know this was a horror film to begin with, you might be surprised at the way the kids perch themselves on porches and rooftops, reminiscent more of Alfred Hitchcock’s THE BIRDS than most of the killer kids films that would more obviously come to mind. The film has a gritty feel to it, as if the camera (and the viewer by association) is rolled around in the dirt and sand, giving this a more grindhousey feel to it ( a much more interesting effect than the computer grindhouse effect one often sees). The washed out way everything looks again adds to this feeling, as if this was a film uncovered from a different era of cinema.

I mentioned Gareth Edwards’ MONSTERS (reviewed here) mainly because, as with that film, Makinov takes full advantage of the environment this film was shot in. From the labyrinthine houses to the dirt roads to the rocky beaches, this is a beautiful island looked at through an insidious lens. There’s a feel of danger even when the camera is focused on the most gentle of things, a theme which reflects the concept of killer children as well. 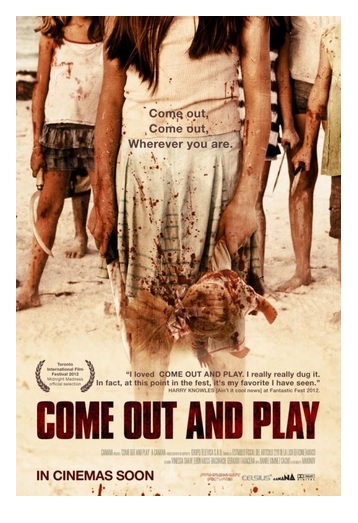 The sheer ballsiness and brutality of not only the kills but the violence in general is pretty grueling. This is not a film that holds back, and though Makinov does some camera sleight of hand so that the kids don’t actually get too bloody, this trickery works most of the time resulting in a series of seamless acts of violence crescendoing into an ending which will reverbrate within.

Though I was shocked by the ending of this film, I was slightly put off by the end credits as Makinov’s name is shoved in our faces over the last image, forcing us to acknowledge his contributions as writer, director and editor. Though this is a bawdy move, I can see how it might be off-putting and self-indulgent to some. Still, Makinov has made a damn fine film with COME OUT AND PLAY and he should be proud of it.

Asking tough questions, delivering fantastic performances, and showing us some gritty and harrowing horror, COME OUT AND PLAY is definitely one of the better horror films I’ve seen so far this year.

I’m sure I’m going to get some shit for not including this one in the main list, but I found MAMA (full review here) to be somewhat of a mixed bag of donuts. I loved the performances by the two girls playing the feral children, but I think the film used some of its scares too many times, Jessica Chastain felt really miscast, and there was entirely too much Mama which demystified the scares for me. Like all of you, pantalones were shat when I first saw the short, which is mainly why I am including in this here honorable mention spot for those who couldn’t get enough of the children horror in COME OUT AND PLAY.

Number 31: TEXAS CHAINSAW 3D!
Number 30: DEVIL’S PASS!
Number 29: THE RAMBLER!
Number 28: THE AMERICAN SCREAM!
Number 27: BATH SALT ZOMBIES!
Number 26: MANBORG!
Number 25: ERRORS OF THE HUMAN BODY!
Number 24: SIGHTSEERS!
Number 23: ABC’S OF DEATH!
Number 22: THE LAST WILL & TESTAMENT OF ROSALIND LEIGH!
Number 21: I DIDN’T COME HERE TO DIE!
Number 20: THE CONJURING!
See ya tomorrow, folks, as the count down continues with the best of the best covered in AICN HORROR over the past year!