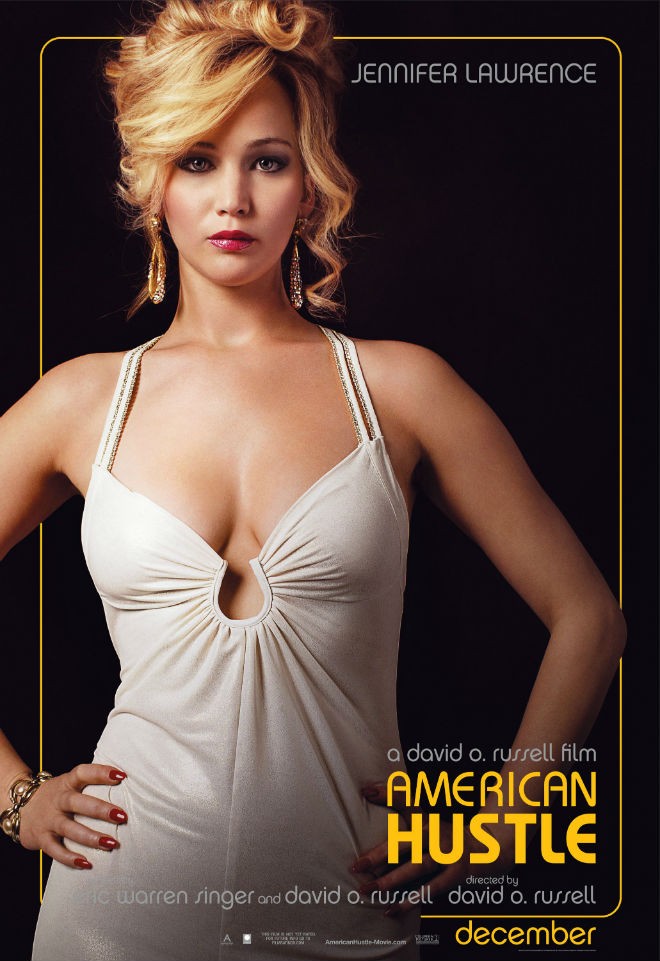 Ahoy, squirts! Quint here with a test screening review of David O. Russell's AMERICAN HUSTLE, which screened last night in LA. I'm sooooo jealous of anybody who got to see this last night, but thankfully one Constant Reader is at least willing to share some of the love with the rest of us unfortunate souls.

Keep in mind this is a test screening, which means a rough, non-finished version of the film. I know you guys are savvy, but just wanted to make sure you had that in mind when you read the below report of the movie as it stands in this current form.

Is Christian Bale as scummy/awesome as he appears? Are Jennifer Lawrence and Amy Adams as sultry as it those posters make them seem? Is Russell's trademark dark humor on full display? Here's "Mitch Henessey" to let ya' know:

Hey guys, long time reader, first time contributor. I caught a test screening for AMERICAN HUSTLE last night at the El Segundo Arclight, and figured I'd send in my thoughts. If you run this, use the name "Mitch Henessey" ('cause I'm a bad motherfucker).

AMERICAN HUSTLE is about a 1970s-era con-man named Irving and his mistress Sydney (also known as the British-accented Edith) who struggle to stay afloat once the FBI gets ahold of their operation. Christian Bale plays Irving, a fat, bald hustler who, aside from his chain of laundromats, makes his money selling fraudulent art and taking checks from people promising them loans, sidestepping the barren banking scene of the late-'70s. After a number of successful scores with new partner/lover Sydney/Edith, they get found out by an ambitious, curly-haired fed by the name of Richie DiMaso (Bradley Cooper). Richie promises the two an out if they help him bust four muckity mucks with their illegal money-lending, which they have no choice to agree. Turns out, this Richie is not only kind of a cocky prick, but he's also secretly getting off on being involved in these con-games as a participant. He locks onto a New Jersey politico named Carmine Polito (Jeremy Renner) with some serious mob ties, who's looking to use the money to reinvigorate downtrodden areas of NJ like Camden and Atlantic City. Irving and Sydney have to tread lightly with all these respective parties, keeping Richie from closing the books on them, the mob from finding out the score and putting bullets in their heads (Richie doesn't care, because he's FBI and knows he's untouchable by the violent criminals), and the apparently sincere Carmine from figuring out that his new pal Irving from the Bronx has been setting him up the whole time. Oh, and there's the perpetual problem of Irving's big-mouthed wife Rosalyn (played by Jennifer Lawrence) who has her crazy level permanently clocked in at 11...

With a cast like this (I won't even mention the famous faces that pop up throughout, including a famous comedian as an excellently straight-laced character), you expect some great performances, and everyone really is top-notch. There's a lot of things going on, with a lot of characters with competing motivations (perhaps the film's greatest achievement is keeping everything coherent through the non-linear chaos), and Bale as Irving holds the whole thing together. I don't know if he actually gained the 40-50 pounds the character has on Bale's normal look, but he's incredible as this loser-ish, street-smart crook with a soft side that often gets him in a lot of trouble. His relationship with Lawrence is hilarious; it's clear the two characters don't love each other, but Rosalyn is a desperately needy personality case that needs Irving around, and guilts him in to sticking by her instead of leaving her for his real love, Sydney. Both actors are as good as they've ever been here, and are magnetic to watch. Adams, Cooper, and Renner are also great, if not as jaw-droppingly awesome as Bale + Lawrence. Adams, in particular, is fascinating to watch as the seductive, but frightened newbie grifter who almost casually slips into her faux-British accent as an instinctive defense mechanism (she also looks slamming in the '70s getups she rocks throughout the film. Yowza). Cooper is great at highlighting his character's insecurity, and, thankfully, you almost don't recognize his handsome face under the beard and permed hair. Four of the five leads (all but Renner) have gotten awards recognition for their work with director David O. Russell, so it makes sense they'd jump onto this one and give it their all, to the benefit of the film.

Like any con film, there is always the question of who's playing who, and what the real motivations of the characters are, but Russell keeps the narrative flowing, and giving you just enough information to hold your attention. The film's resemblance to BOOGIE NIGHTS goes beyond the '70s backdrop and soundtrack; the story starts off light and poppy, making you feel the excitement of their swindles, but when the stakes get higher and higher, the darkness and tension starts to get thick enough to cut through with a knife. Thankfully, the film is wall-to-wall with humor, and more along the sad-sack character humor of THE FIGHTER's Dick Eklund than the over-the-top shrieking of his mom and sisters in that same movie. A scene with Lawrence's character rocking out to Paul McCartney's "Live and Let Die" after inadvertently (or purposefully?) getting her husband in trouble doesn't add anything to the plot, but is a welcome addition and injects some late humor into the proceedings. The soundtrack, in general, is a near-unbelievable collection of era-appropriate tunes, with more than one Led Zeppelin track and a ton of soul/disco classics. The film has a sense of style and energy that is infectious and distinguishes it from both the plethora of Carter-era stories (like last year's ARGO) and the age-old "con-man" genre; THE SPANISH PRISONER this ain't. I can't imagine another film with this level of awards potential where central characters genuinely cannot distinguish an Arab from blacks and latinos...that is, until Arab money is on the table.

They said the cut we saw was unfinished, but I'm really hoping they don't tinker with it too much. The looser character moments are hardly Altman levels of meandering, and they do what many con-films fail to do, which is get you emotionally involved with the story. It's a near-perfect story with a ton of great performances and more hilarious moments than I'd care to count, and as of right now, if this were to sweep this year's Oscars, I'd hardly bat an eye. This very well may be David O. Russell's masterpiece (although I'll have to re-watch THREE KINGS for a confirmation of that).

Thanks, Mitch. Also, fuck you for getting to see this already. But mostly thanks.