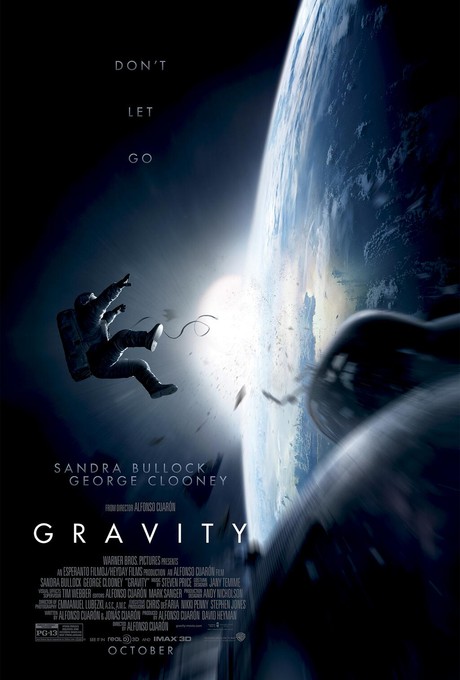 In a Toronto International Film Festival that had the strongest lineup in years, with very strong buzz from 12 YEARS A SLAVE, DALLAS BUYERS CLUB, and PRISONERS, it was GRAVITY that really owned the festival. I’ve never seen critics so enraptured over a film. Right now it is running at 97% on Rotten Tomatoes, and I think it is underrated.

GRAVITY is something new. It is not overstating the case to say it is art on a new scale. Alfonso Cuarón is leveraging an experimental art-house sensibility with a blockbuster-level budget and tools. It took four and a half years to make the film, and much of the time was inventing new technology, because it has never before been possible to make a film like this. But the groundbreaking nature extends farther than effects. Cuarón is experimenting with the nature and language of film itself. Often when people say a film is experimental, they mean it is an experiment that doesn’t quite succeed. That’s not the case here. On the contrary -- Cuarón has broken through to another level that nobody knew existed.

The language of cinema has evolved over more than a century into something now familiar. There is a story with a beginning, middle, and end, often told in three acts. There are multiple characters. You start with establishing shots, and scenes are cut between closeups of the characters talking. Action moves left to right. GRAVITY dispenses with many of these conventions, boiling filmmaking down to its essence, and then rebuilds it from scratch.

The plot is stunning in its simplicity. Sandra Bullock plays rookie astronaut Ryan Stone, an astrophysicist trying to install her new instrument on the Hubble Space Telescope. She’s being helped out by Matt Kowalski (George Clooney), who is flying around the space shuttle in an experimental jet pack. When an accident destroys the space shuttle, the two are left stranded in space and have to figure out how to survive.

What is cinema, at the core? Images, at least one character, and some narrative. That really is all GRAVITY is. The movie has minimal dialog. It has two-ish characters. The characters don’t have elaborate backstories or a massive arc. Plot is the bare minimum it takes to move the action along. This is simply a tale of survival against a backdrop of some of the most stunning images ever captured or constructed.

And as for the language of cinema? It is almost out the window. The film opens with an epic, 13+ minute shot that doesn’t cut away. It surely breaks a record for scale, starting with the whole Earth, and ultimately ending up in close-ups, at least for a while. Cuarón also makes excellent use of 3D -- perfect for the inherent three dimensionality of space. And when you add the IMAX experience, the effect is almost overwhelming. Because of this and the fact that many of our normal movie cues are gone (cuts at just the right time, ominous music), it doesn’t feel like a movie -- it feels like you are floating in space with the astronauts.

I can’t overstate this case -- Cuarón isn’t just doing fancy camera tricks here to show off. Most people won’t consciously know whether there was a cut in the scene or not. But when the camera never leaves our main character, trapped in the void, you *feel* the horror in your gut. Layered on top of that is the sense that he’s taking away all of our cinematic comforts that reassure us that this is all going to turn out ok because it is just a movie. This achieves what every horror movie attempts, but through entirely different means -- by breaking with, rather than embracing convention.

This sense of verité is critical to other aspects of GRAVITY as more than a popcorn blockbuster, but art that affects you on a deep level. The film conjures an almost entirely unique simultaneous sense of certain doom and awe. We’re floating above this majestic blue marble that stirs feelings of wonder, safety, tranquility, creation, and comfort. And yet, we are trapped just out of its reach and by the unrelenting vacuum and cold, hard physics. Equations have no term for mercy. In fact, this movie is practically America’s favorite actor and actress in a giant physics simulation. (!!!) It is ironic that getting that perfect is absolutely essential to the emotional impact of the film. We can’t feel like there is a hand of God or a writer to save us.

For years I have known this much of the setup. And I’ve tried to imagine how to make a compelling film out of that. My excitement was off the charts, since I’m an astrophysicist and a film geek, and Cuarón is one of my favorite directors. And yet, all I could imagine was something slow and ponderous, some meditation on existence. I must admit, my imagination proved woefully inadequate. GRAVITY blew my expectations out of the water. This film is action-packed, and was greater in nearly every dimension than what I had imagined.

This isn’t to say that the film is perfect. Characterization is minimal, for a start. Alfonso Cuarón, and his son Jonás, who was his writing partner, bent the reality of being an astronaut near the breaking point to tell the story. I’ll write up a whole separate article about the things they got wrong and right about the whole experience. In short, the details are mostly correct, but a few big things have been changed to either make the story possible in the first place, or heighten the drama. It is the latter I have a problem with, because strictly speaking it was not necessary. Without giving anything away, one big difference between GRAVITY and reality is that things are sped up greatly in the movie in all respects, from the initial cataclysm that sets the plot in motion, to the physical motion of the astronauts in space. Those choices were probably necessary. But one wasn’t: Sandra Bullock’s character is a first-time astronaut and has only had 6 months of training before she is to install her prototype instrument on the Hubble Space Telescope. This is not even close to possible. Hubble instruments are developed over a decade, and astronauts have many years of training. Sure the change makes her seem more vulnerable, but I don’t think it was worth it.

GRAVITY is easily in my top 10 films of all time, and will be taught in film schools forever. But for me it goes much farther. It is some of my favorite art of all time. For me, this is the Sistine Chapel of films. A top artist in the dominant art form of his day, at the peak of his abilities, has been given unfathomable resources to create a stunning work of celestial magnificence on a scale never seen before. A master, directing 250 artists, and a crew of hundreds more, to paint 130,000 frames, which, rise in three dimensions out of a 40 foot IMAX wall. When strung together, they tell a story that could only be told today, built on top of a half-trillion dollar space race, but one which is at once deeply primal and human. Do *not* wait for the DVD. GRAVITY demands to be seen in IMAX 3D.