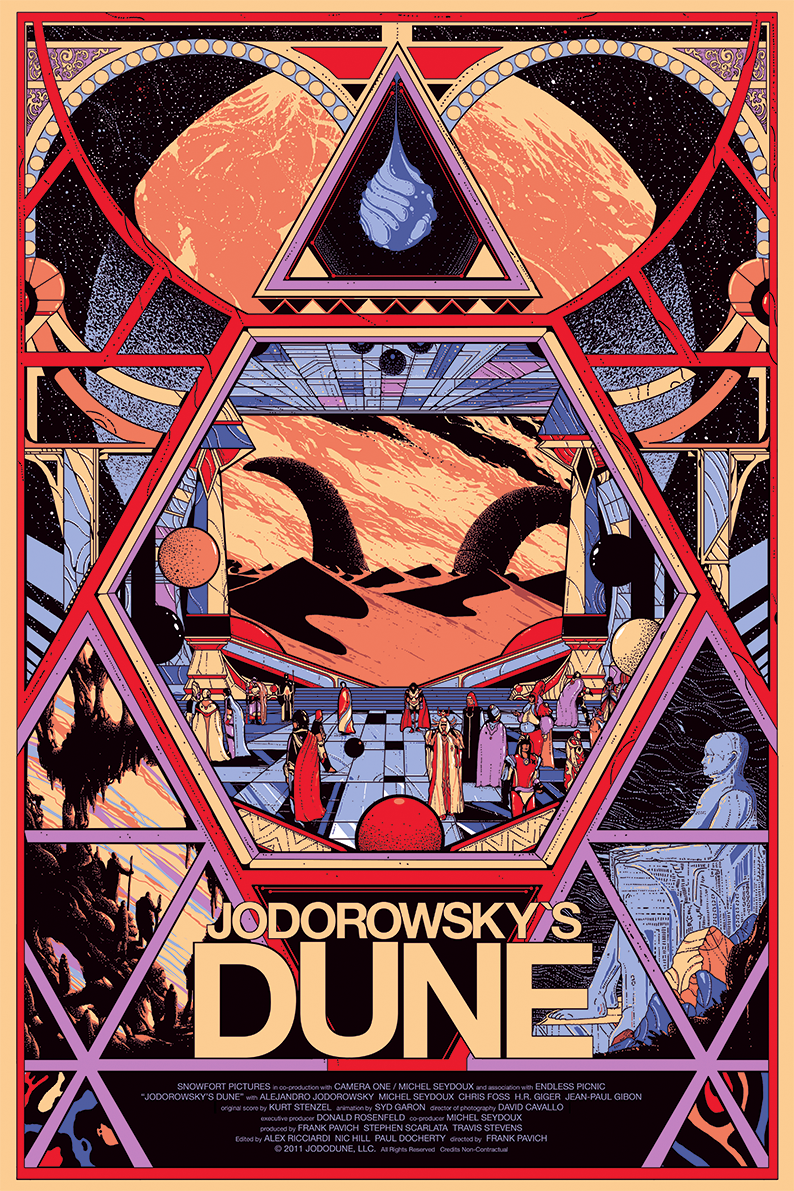 I drank up JODOROWSKY'S DUNE like a man in the desert.  I'd read snippets throughout my years as a budding ALIEN fan and science fiction geek - the masterpiece that never happened from a filmmaker whose ideas and ambitions were simply too big for the cinema at that time.  It could be debated that his DUNE would be too much for today's audiences, both thematically and stylistically - the movie he wanted to make bears little resemblance to David Lynch's film.  From some of the themes and plot changes Alejandro Jodorowsky wanted to make, at times it seemed to bear little resemblance to the classic Frank Herbert novel itself.

I love near-miss movie stories, but I never really thought they would make great fodder for a documentary until now.  Frank Pavich's movie is a must-see for anyone who is a fan of cinema, of Jodorowsky in particular, and science fiction in all its shapes and forms.  The bulk of the film is Jodorowsky telling in his own words about his plans, his hopes and dreams, and the various relationships he formed along the way in making this ambitious project.  I admit to some blind spots in my cinema intake, and Jodorowsky is one of them; I'd always meant to see EL TOPO, THE HOLY MOUNTAIN, and SANTA SANGRE, but it hasn't happened in all the years of my film geekdom.  I will certainly make the strongest effort to see them now, but JODOROWSKY'S DUNE doesn't require deep knowledge of his work to enjoy it.  The film paints a wide canvas - to Hollywood at the time, to science fiction, and to Frank Herbert's work.

Jodorowsky wanted to make a film that expanded the mind, that changed everything for the person who saw it, and to that end he enlisted artists and creative minds across the world.  Jodorowsky (who isn't the only interview of the movie; we also hear from producer Michel Seydoux, artist H. R. Giger, and filmmakers Nicolas Winding Refn and Richard Stanley.  You even see film critics Drew McWeeny and Devin Faraci make an appearance) tells his stories in a charming way, infectiously bringing his passion and his love of cinema to the movie.  He wears his emotions front and center, holding nothing back.  At times his emotion threatens to overwhelm him, so badly did Jodorowsky want to see this movie happen.

His ambtions were huge, and as Jodorowsky enlisted great science fiction artists like Moebius, Giger, and Chris Foss, he wanted to change not only cinema as we know it but how audiences engaged with it.  The opening shot that he wanted to do puts wannabes like CONTACT to shame - an infinite trip to the universe that is gloriously reimagined in the film's beautiful animation, which brings many of Foss's, Moebius', and Giger's art to life.  Jodorowsky's ideas filled a thousand-page tome that looks like it would break someone's foot if it got dropped on it, and more than anything else, I wanted to leaf through it like some Holy Bible.  If someone were to use it to adapt a feature even now, all the information they would need is right there, but without Jodorowsky to guide or his passion to fill it up, I don't know how successful it would be.

JODOROWSKY'S DUNE is a wonderful exploration of what could have been, and anyone who loves cinema or science fiction will easily be able to follow it and to fall into Jodorowsky's dream.  The fact is, if his DUNE had happened, ALIEN likely wouldn't have; at least, the ALIEN that we know of today.  If his DUNE had actually gotten made, it would have changed everything had it become popular; the world of STAR WARS as we know it would certainly be much different.  I don't think I'd be willing to give up ALIEN for DUNE, but I'm intrigued at the possibilities.  That's what's most wonderful about Frank Pavich's movie - the opportunity to play with the infinite possibilities of cinema.