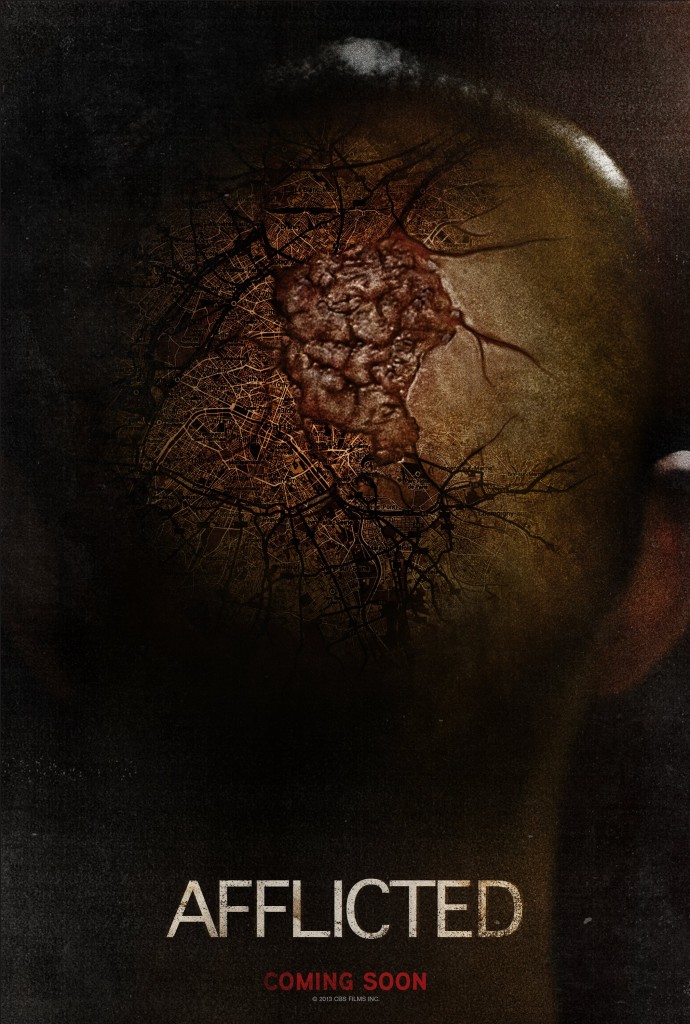 There are few horror debuts as auspicious as AFFLICTED, in my opinion.  Derek Lee and Clif Prowse have made an ambitious, thrilling, and most importantly, scary film that feels unique and original, even though it explores a genre almost as old as film itself.  It's one of the very few found footage movies (and I hesitate to use that term because AFFLICTED is more along the lines of a documentary style) that the very conceit is integral to the story, adding thematic depth and isn't simply a parlor trick.  If you see a found footage movie and wonder why they chose that motif to tell their story, they're probably doing it wrong.  But AFFLICTED is told in the only way it should have been, and becomes all the more riveting because of it.

AFFLICTED wears its influences on its sleeve, but Prowse and Lee borrow from the best - from AN AMERICAN WEREWOLF IN LONDON, LET THE RIGHT ONE IN, and, even in some of the beats, Hong Kong action cinema.  This mix makes for a refreshing change of pace from movies of this type.  Every few years, a movie comes along that shuffles all the genre tropes and gives us a fresh take on a very explored subject. AFFLICTED is like that.

If I'm being vague what genre AFFLICTED is exploring, that's for a purpose; although it's likely once the trailers hit for this sure-to-be-wide-released film that audiences will figure it out, the fun of AFFLICTED lies in its almost endless ability to surprise.  There are shots that are about as stunning as I've ever seen in the found footage conceit, but what makes it richer is that we care for every character on the screen.  If the marketing goes the way I think they might, I think it's a mistake to hide what will be obvious to most once people get wind of what Lee and Prowse have done, but if it gets butts in seats to see this, then that's fine by me.

Clif Prowse and Derek Lee are lifelong friends (in real life and in film) and that genuine friendship comes across well onscreen.  When the two (playing themselves) decide to take a trip to Europe, Lee's family tries to talk him out of it; Lee suffers from a rare disorder that could give him an aneurysm at any time.  Clif is a documentary filmmaker, and both want to document their trip and post it online.  Lee thinks this could be the last time he'd be able to do anything like this, and so the two enthusiastically take their trip.

But in Paris, Lee takes a girl home from a bar, and is brutally attacked.  It would be unfair to go further into the story, but as events progress, Derek and Clif's friendship is put to the test, and the changes that Derek undergoes make his situation more desperate.  At a crucial point in the movie, AFFLICTED flips the genre straight over and becomes something I've not seen handled in quite the same way on screen before.  It helps that the effects work (made on a very small budget) is used to maximum effect, and audiences will squirm in the best ways that great horror cinema can do.

Lee and Prowse wisely stick close to their principal characters, but I love how they build their world - as we experience everything through their eyes, it also gives the audience a chance to play with the film's mythology.  They paint just enough of the canvas to allow audiences to wonder.  For a film with such a small budget, the scope of AFFLICTED is huge, covering several countries and locations, and AFFLICTED uses the most of its budget to create a living, thriving universe.  It's also, bar none, the best shot found footage movie I've ever seen; shakycam is rare, but not only that, there are some wonderous moments that I don't even want to know how they pulled off.  There's one particular chase scene that stunned me in how it uses the motif, and Norm Li makes the absolute most out of his cameras.  I can't express how well shot AFFLICTED is, and it makes a low-budget movie look like a tentpole blockbuster.

AFFLICTED is also really fucking scary.  Lee and Prowse do not waste a shot, do not waste a moment, in telling their story.  Through sound, the careful use of effects, and through great character work, Prowse and Lee take an intimate story and turn it into something larger than itself.  It explores the genre with true grace, intelligence, and terror; for a monster to truly work onscreen, you have to love it a little.  AFFLICTED loves its monster, and so do we.  With AFFLICTED, I am witness to the birth of two phenomenally talented and passionate filmmakers, and AFFLICTED should be rightfully huge when it comes out.  It's one of my favorite films of Fantastic Fest so far, and one of the best horror films of the year.