Copernicus calls WE GOTTA GET OUT OF THIS PLACE one of his favorites of TIFF! 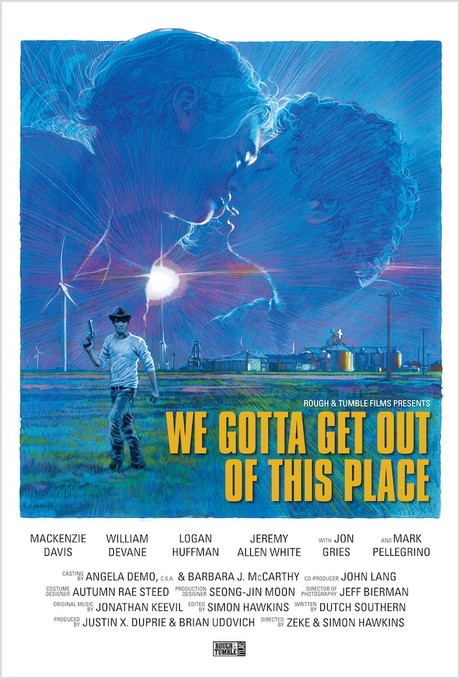 My biggest “discovery” of TIFF is WE GOTTA GET OUT OF THIS PLACE, and it is already one of my favorite movies of 2013.  It is a stunning film -- strong characters, breakout performances, witty dialog, colorful local flavor, and outstanding cinematography driven by a small-town Texas heist plot.  This film has the heart and soul of BLOOD SIMPLE. Hell, it is practically the reincarnation once you factor in that it is also the first feature from a directing duo of brothers -- Simon and Zeke Hawkins.

Actually, I hesitate to even mention that this is a first feature from the Hawkins brothers, because you might think you're getting something less than polished.  But it isn’t like that.  It looks like they had all the money in the world to make it.  This movie is better than almost everything Hollywood releases these days, where you have to be either a sequel, presold property, comedy, genre, or star vehicle.  This is exactly the kind of film that I was starting to think doesn’t get made anymore.  A smart drama driven by a great script and strong characters without major stars to sell it. It hearkens back to the days when the Coens, Quentin Tarantino, and Robert Rodriguez could get first films made and seen seen out of pure awesomeness.

In WE GOTTA GET OUT OF THIS PLACE, we open with a character pulling a brazen burglary involving an explosion and a safe. Next we’re introduced to two characters chatting in the most South Texas of fast-food chains -- a Whataburger.  Sue (Mackenzie Davis) and Bobby (Jeremy Allen White) are talking about the menu, books, and going off to college.  It seems clear that these two are a couple.  But then Sue mentions that she learned in class that, “There are 32 ways to tell a story, but there’s only one plot: things are not what they seem.”  Enter B.J. (Logan Huffman), the thief from the first scene, who is really Sue’s boyfriend, and Bobby’s best friend.  Indeed things are not what they seem, and that’s a perfect introduction to these festivities.

It turns out that B.J. has robbed from his boss, Giff (Mark Pellegrino). Giff is not exactly what you’d call book smart, but he has his ways of getting to the truth.  He comes up with a plan to force not just B.J., but also Bobby and Sue, to pay him back by robbing a cotton gin, where money is being laundered by *his* boss, Big Red.  That’s all I’ll say about the plot.  While this setup sounds straightforward, just remember that line from the intro -- “things are not what they seem.”

My favorite character (and that is saying something) is Giff, the villain.  He just exudes a kind of menacing cowboy-town half-insane charisma.  Picture an extra-countrified Woody Harrelson with the deadly seriousness of his character in NO COUNTRY FOR OLD MEN, mixed with the murderous insanity of his character in SEVEN PSYCHOPATHS.  Actually, I like Mark Pellegrino in this role even better than I would have liked Woody Harrelson, because he was a revelation.  I’ve seen him in other stuff, but he isn’t so recognizable that he brings baggage to the role.  Giff is just full of great one-liners and mustache-twirling villainy, and every time he opens his mouth something awesome flies out. To give you some idea of the kind of cinematic pranksters the filmmakers are, when we’re introduced to Giff, he’s kicking someone saying, “Where’s the money!” If you don’t instinctively add a “Lebowski” to that (or even if you do), Google Mark Pellegrino’s filmography to see why that is an awesome gag.

Speaking of banditry, my heart has now been stolen and Mackenzie Davis is the culprit. She tall, blonde, beautiful, and just nails the role of Sue. I believe this was her second film, but trust me when I say we’re going to start seeing her in a whole lot more. (She was also in THE F WORD, which played TIFF.) Here character is a voracious reader, and she starts off as just a typical small-town teen worry-yearning about the seismic transition from high school to college. But soon she’s caught in both a love and gangster triangle and all those books she’s read suddenly don’t seem like fiction anymore. As the forces around her pull Sue through love, shame, confidence, terror, and more, Mackenzie Davis keeps stepping up to the plate and hitting home runs with every scene.

The actors playing the other two protagonists, Logan Huffman, and Jeremy Allen White, also aren’t very well known (White is on the Showtime series SHAMELESS), but from their performances you’d think they had been acting for decades. I was particularly surprised by Logan Huffman as BJ. I initially had his character pegged as the stock dumb boyfriend, a foil for the much smarter, but less suave Bobby. But Huffman makes the character much deeper than that. When he turns on that country charm, you can see why the hot girl has fallen for him, and why Bobby is his best friend. He’s got a grin and a charisma that has people eating out of his hands, but a darker side too. This is a character it seems has a few holes as far as what I would guess was on the page, but Logan Huffman just fills it all in, and then brings it to another level. Alongside him, Jeremy Allen White gives a less flashy, but equally critical performance as Bobby. He doesn’t have movie-star looks, which makes him perfect for the role of a young kid going nowhere in a backwater town. But what he lacks in beauty he makes up for in sincerity. We are on his side from the second scene and he just pulls the audience in more and more as the movie unfolds.

A bunch of the credit for the strong characters no doubt goes to the writer, Dutch Southern. I’ve never heard of him, but apparently he’s writing the female equivalent to THE EXPENDABLES. The dialog is sharp and witty. The characters always say something a bit more clever than people do in real life, but the filmmakers have grounded the movie in such a way that it never feels stylized. And according to one story told after the premiere, he likes to listen to the Steve Miller Band while he writes. Just think of the characters’ names and sing TAKE THE MONEY AND RUN. While the movie isn’t a literal interpretation of that song, it sure as hell has the feel of it. There’s a nod to this in the film -- one of the companies shown is named Miller’s Tractor.

It is rare that I talk about producers. Here though, with a young cast and first-time directors, by all accounts Brian Udovich (ALL THE BOYS LOVE MANDY LANE, THE WACKNESS) was absolutely critical in putting this film together. He had help from Justin Duprie, who grew up in Taft, Texas, where the movie was shot. Duprie knew the locations and brought the small-town generosity to bear on the production, which no doubt was able to leverage a small budget to great effect. The result is an overarching authenticity that you rarely seen in larger productions.

Midnight Madness and Vanguard programmer Colin Geddes mentioned that he had seen an early version of WE GOTTA GET OUT OF THIS PLACE in December 2012, and it was clear the filmmakers had something special, but when he saw another version in April 2013, it had been elevated to another level. After the premiere I talked to Brian Udovich, and he explained that the movie magic was really a process of hard work and refinement. They shot what they could on the budget they had in Texas, but then used the strength of the script and the footage they’d shot to raise more money and shoot extra scenes, adding depth to the story. They even rearranged the structure. The bottom line is that this isn’t some typical indie production, where they just did what they could. They just kept refining and working until they achieved greatness.

In fact, some of those scenes added are what elevated the movie from “good” to “great.” One was a scene with Jon Gries as the sheriff. Yes, Lazlo from REAL GENIUS and Uncle Rico from NAPOLEAN DYNAMITE is now the man the citizens of this small town have entrusted to police them. Finally, a caper movie whose plot can’t be undone with the suggestion, “Why don’t you just tell the cops?” They do, and thank god because we get a great scene, for my money even more memorable than the “Stay the out of Malibu” scene in THE BIG LEBOWSKI, about “wants” versus “needs” and a 19 year-old Mexican hooker delivered in a total deadpan by Jon Gries. The second scene I won’t ruin, but it involves William Devane being a total boss.

WE GOTTA GET OUT OF THIS PLACE debuted to great reactions from everyone I talked to who saw it at TIFF. Next up, it is playing FANTASTIC FEST. I have no doubt it will get picked up for distribution, because there is just so much talent on display. So many of the people involved may be relative unknowns today, but they won’t be for long. I can’t wait to see it again.