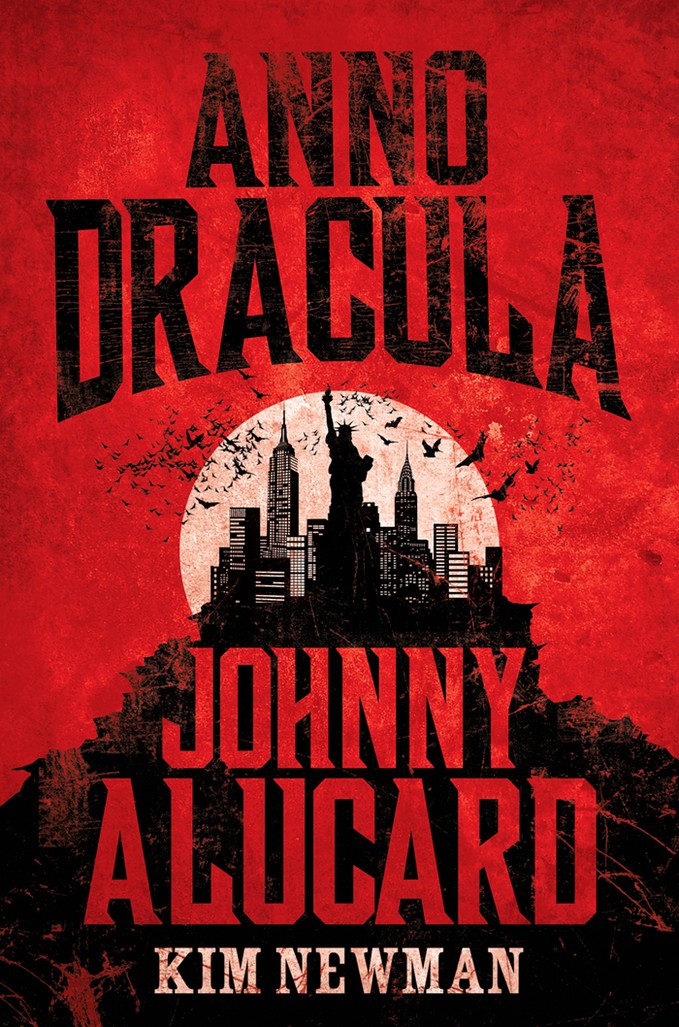 The fine folks over at Titan Books sent over this excerpt from JOHNNY ALUCARD by Kim Newman.  This is the latest installment in the author’s ANNO DRACULA series, which chronicles an alternate reality brought about by Dracula’s defeat of Van Helsing back in the 1800s...which paved the way for vampirical domination of Earth.  Each book is set in a significantly different time frame (1800s, 1918, 1960s) - this one is set in the 1970s-90s.

Per Titan, JOHNNY ALUCARD merges Geek favorties like filmmaking and vampires by creating..

...an alternate fictional history where the heroes of Bram Stoker’s classic novel failed to defeat Dracula. Beginning in the 1970s on the set of Francis Ford Coppola's Dracula and concluding in the 1990s, Johnny Alucard explores a vampire overrun Hollywood, filled with a mix of real life personalities and iconic characters from film and literature.

Here’s a sample of the novel...

Fade to a face, hanging upside-down in the roiling fire.

JONATHAN HARKER, a solicitor’s clerk, lies uneasy on his bed, upstairs in the inn at Bistritz, waiting. His eyes are empty.

With great effort, he gets up and goes to the full-length mirror. He avoids his own gaze and takes a swig from a squat bottle of plum brandy. He wears only long drawers. Bite marks, almost healed, scab his shoulders. His arms and chest are sinewy, but his stomach is white and soft. He staggers into a programme of isometric exercises, vigorously Christian, ineptly executed.

The crucifix above the mirror, hung with cloves of garlic, gazes down with blind eyes on Harker. He misses his footing and falls on the bed, then gets up, reaches, and takes down the garlic.

He bites into a clove as if it were an apple, and washes the pulp down with more brandy.

HARKER’s Voice: All the time I stayed here in the inn, waiting for a commission, I was growing older, losing precious life. And all the time the Count sat on top of his mountain, leeching off the land, he grew younger, thirstier.

Harker scoops a locket from a bedside table and opens it to look at a portrait of his wife, MINA. Without malice or curiosity, he dangles the cameo in a candle flame. The face browns, the silver setting blackens.

HARKER’s Voice: I was waiting for the call from Seward. Eventually, it came. There is a knock on the door.

2
‘It’s all right for you, Katharine Reed,’ Francis whined as he picked over the unappetising craft services table. ‘You’re dead, you don’t have to eat this shit.’

Kate showed teeth, hissing a little. She knew that despite her granny glasses and freckles, she could look unnervingly feral when she smiled. Francis didn’t shrink: deep down, the director thought of her as a special effect, not a real vampire.

In the makeshift canteen, deep in the production bunker, the Americans wittered nostalgia about McDonald’s. The Brits – the warm ones, anyway – rhapsodised about Pinewood breakfasts of kippers and fried bread. Romanian location catering was not what they were used to.

Francis finally found an apple less than half brown and took it away. His weight had dropped visibly since their first meeting, months ago in pre-production. Since he had come to Eastern Europe, the insurance doctor diagnosed him as suffering from malnutrition and put him on vitamin shots. Dracula was running true to form, sucking him dry.

A production this size was like a swarm of vampire bats – some large, many tiny – battening tenaciously onto the host, making insistent, never- ending demands. Kate had watched Francis – bespectacled, bearded and hyperactive – lose substance under the draining siege, as he made and justified decisions, yielded the visions to be translated to celluloid, rewrote the script to suit locations or new casting. How could one man throw out so many ideas, only a fraction of which would be acted on? In his position, Kate’s mind would bleed empty in a week.

A big budget film shot in a backward country was an insane proposition, like taking a touring three-ring circus into a war zone. Who will survive, she thought, and what will be left of them?

The craft table for vampires was as poorly stocked as the one for the warm. Unhealthy rats in chicken-wire cages. Kate watched one of the floor effects men, a new-born with a padded waistcoat and a tool-belt, select a writhing specimen and bite off its head. He spat it on the concrete floor, face stretched into a mask of disgust.

‘Ringworm,’ he snarled. ‘The commie gits are trying to kill us off with diseased vermin.’

‘I could murder a bacon sarnie,’ the effects man’s mate sighed.

‘I could murder a Romanian caterer,’ said the new-born.

Kate decided to go thirsty. There were enough Yanks around to make coming by human blood in this traditionally superstitious backwater not a problem. Ninety years after Dracula spread vampirism to the Western world, America was still sparsely populated by the blood-drinking undead. For a lot of Americans, being bled by a genuine olde worlde creature of the night was something of a thrill.

That would wear off.

3
Outside the bunker, in a shrinking patch of natural sunlight between a stand of real pines and the skeletons of fake trees, Francis shouted at Harvey Keitel. The actor, cast as Jonathan Harker, was stoic, inexpressive, grumpy. He refused to be drawn into argument, invariably driving Francis to shrieking hysteria.

‘I’m not Martin Fucking Scorsese, man,’ he screamed. ‘I’m not going to slather on some lousy voice-over to compensate for what you’re not giving me. Without Harker, I don’t have a picture!’

Keitel made fists but his body language was casual. Francis had been riding his star hard all week. Scuttlebutt was that he had wanted Pacino or McQueen but neither was willing to spend three months behind the Iron Curtain.

Kate could understand that. This featureless World War II bunker, turned over to the production as a command centre, stood in ancient mountains, dwarfed by the tall trees. As an outpost of civilisation in a savage land, it was ugly and ineffective.

When approached to act as a technical advisor to Coppola’s Dracula, she had thought it might be interesting to see where it all started: the Changes, the Terror, the Transformation. No one seriously believed vampirism began here, but it was where Dracula came from. This land had nurtured him through centuries before he decided to spread his wings and extend his bloodline around the world.

Three months had already been revised to six. This production didn’t have a schedule, it had a sentence. A few were already demanding parole.

Some vampires felt Transylvania should be the undead Israel, a new state carved out of the much-redrawn map of Central Europe, a geographical and political homeland. As soon as it grew from an inkling to a notion, Ceauşescu vigorously vetoed the proposition. Holding up in one hand a silver-edged sickle, an iron-headed hammer and a sharpened oak spar, the Premier reminded the world that, ‘In Romania, we know how to treat leeches – a stake through the heart and off with their filthy heads.’ But the Transylvania Movement (‘Back to the forests, back to the mountains’) gathered momentum. Some elders, after ninety years of the chaos of the larger world, wished to withdraw to their former legendary status. Many of Kate’s generation, turned in the 1880s, Victorians stranded in this mechanistic century, were sympathetic.

‘You’re the Irish vampire lady,’ Harrison Ford, flown in for two days to play Dr Seward as a favour to Francis, had said. ‘Where’s your castle?’

‘I have a flat in the Holloway Road,’ she admitted. ‘Over an off-licence.’

In the promised Transylvania, all elders would have castles, fiefdoms, slaves, human cattle. Everyone would wear evening dress. All vampires would have treasures of ancient gold, like leprechauns. There would be a silk-lined coffin in every crypt, and every night would be a full moon. Unlife eternal and luxury without end, bottomless wells of blood and Paris label shrouds.

Kate thought the Movement lunatic. Never mind cooked breakfasts and (the other crew complaint) proper toilet paper, this was an intellectual desert, a country without conversation, without (and she recognised the irony) life.

She understood Dracula had left Transylvania in the first place not merely because he – the great dark sponge – had sucked it dry, but because even he was bored with ruling over gypsies, wolves and mountain streams. That did not prevent the elders of the Transylvania Movement from claiming the Count as their inspiration and using his seal as their symbol. An Arthurian whisper had it that once vampires returned to Transylvania, Dracula would rise again to assume his rightful throne as their ruler.

Dracula, at long long last, was truly dead, had been for more than fifteen years. Kate had seen his head stuck on a pole, heard the confession of his merciful assassin, attended his cremation on a beach outside Rome, seen his ashes scattered into the sea. From that, there was no coming back, not even for a creature who had so many times avoided his appointment in Samarra.

But the Count meant so much to so many. Kate wondered if anything was left of him, anything concrete and inarguable and true. Or was he now just a phantom, a slave to anyone who cared to invoke his name? So many causes and crusades and rebellions and atrocities. One man, one monster, could never have kept track of them all, could never have encompassed so much mutually exclusive argument.

There was the Dracula of the histories, the Dracula of Stoker’s book, the Dracula of this film, the Dracula of the Transylvania Movement. Dracula – the vampire and the idea – was vast. But not so vast that he could cast his cloak of protection around all who claimed to be his followers. Out here in the mountains where the Count had passed centuries in petty predation, Kate understood that he must in himself have felt tiny, a lizard crawling down a rock.

Nature was overwhelming. At night, the stars were laser-points in the deep velvet black of the sky. She could hear, taste and smell a thousand flora and fauna. If ever there was a call of the wild, this forest exerted it. But there was nothing she considered intelligent life.

She tied tight under her chin the yellow scarf, shot through with golden traceries, she had bought at Biba in 1969. It was a flimsy, delicate thing, but to her it meant civilisation, a coloured moment of frivolity in a life too often preoccupied with monochrome momentousness.

Francis jumped up and down and threw script pages to the winds. His arms flapped like wings. Clouds of profanity enveloped the uncaring Keitel. ‘Don’t you realise I’ve put up my own fucking money for this fucking picture,’ he shouted, not just at Keitel but at the whole company. ‘I could lose my house, my vineyard, everything. I can’t afford a fucking honourable failure. This has abso-goddamn-lutely got to outgross Jaws or I’m personally impaled up the ass with a sharpened telegraph pole.’ Effects men sat slumped against the exterior wall of the bunker (there were few chairs on location) and watched their director rail at the heavens, demanding of God answers that were not forthcoming. Script pages swirled upwards in a spiral, spreading out in a cloud, whipping against the upper trunks of the trees, soaring out over the valley.

‘He was worse on Godfather,’ one said.

ANNO DRACULA - JOHNNY ALUCARD releases next week here in the US and is available for pre-order HERE in physical, eBook, and audio formats.