Jerry Lewis Actually Talks About His Legendary And Unreleased Movie, THE DAY THE CLOWN CRIED!! 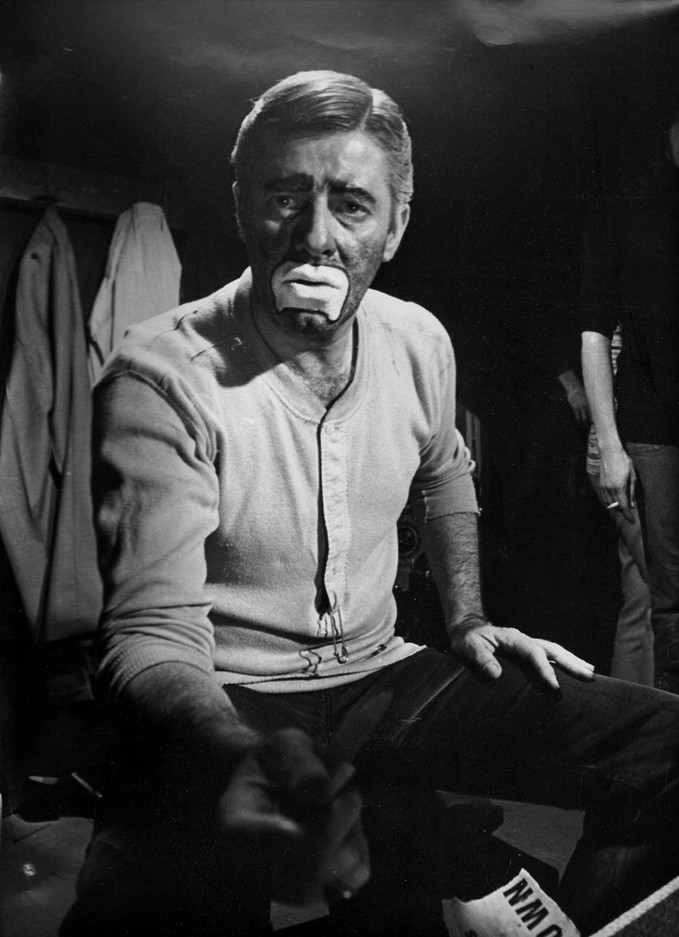 A few weeks ago we got a look at some material from THE DAY THE CLOWN CRIED - a famously unreleased 1972 film starring and directed by Jerry Lewis which chronicles the wrenching tale of a clown who is tossed into a German concentration camp during WWII...does his best to bring laughter to the children there...but ends up, well, heading into in ‘the showers’ with them in a final scene which would easily have been on of the most disturbing, unnerving, and unforgettable moments in film history.

Even if it didn’t play well artistically, based on the script I’ve read, those final moments could easily sear themselves into one’s consciousness on the power of concept alone.

Many suspected the aforementioned 'making of' material would quickly be pulled from the Net.  It is, interestingly...perhaps even suspiciously and intriguingly...still online and viewable HERE.

There’s evidently much legal swirl surrounding the picture, and a hefty dose of openly stated resistance on Lewis’ part when asked if CLOWN will ever see the light of day.  Discussions of the matter often result in no small portion of snark and coy backlash from Lewis - who seems annoyed that subject of whether or not we’ll ever see the film released continues to be on interviewers’ minds.

However,  a recent discussion with Entertainment Weekly took on a slightly different texture and is noteworthy for several reasons.  For example, where Jerry had previously indicated being happy to disappear THE DAY THE CLOWN CRIED because he felt it was lacking - but here he indicates a certain amount of pride in the movie.

Below I’ve presented a few choice quotes (with quote attributions I’ve added for clarity) from Chris Nashawaty’s interview with Lewis, the entirety of which can be found HERE.  During the interview, Lewis challenged Nashawaty to a game of ten questions - some of which included written answers.

CN:  Okay, number four: is the reason the film has not been released because you are unhappy with it?

LEWIS: Which doesn’t mean that Yes, I’m unhappy with the work that I did. But who am I preserving it for? No one’s ever gonna see it. But the preservation that I believe is that, when I die, I’m in total control of the material now. Nobody can touch it. After I’m gone, who knows what’s going to happen? I think I have the legalese necessary to keep it where it is. So I’m pretty sure that it won’t be seen. The only thing that I do feel, that I always get a giggle out of, some smart young guy like Chris is going to come up with an idea and he’s going to run the f—ing thing. I would love that. Because he’s going to see a hell of a movie!

CN:  Are you worried that if you showed the film it would be misinterpreted?

CN: Do you think Jewish audiences would like it?

LEWIS:  Jews? Oh, they would love it. I traveled for 18 months from Stuttgart to Belsen to Auschwitz. I was putting together my crew and they brought me a man named Rolf, who was the guy who pulled the f—ing lever on the gas chamber. And I said the only way I ever allow him near me, no less interview him, would be if he understood that I am concerned about the accuracy of the film and it would be because I need some information. But I said to my production manager, “I’m not sure I can handle it.” After about six weeks of pretty good meditation, I talked to the guy. The question nobody could answer, that the victims couldn’t answer, was: Where were they [when they] were waiting for the ones ahead of them in the gas chambers? How long were they waiting? Where were they standing? Was there an adjacent room? Did they sit? What kind of time was involved? The torture here was waiting! And they couldn’t dull the sound effects, the screaming. Could I get that information from this man? I wanted to wear a mask so he wouldn’t know it was me. When he came into the office and sat down, I thought, This poor human being. I’m sitting there and it was five after nine at night by the time we were done talking and I was…undone. But he gave me the bottom of his f—ing soul! He wanted penance. I kept looking at his right hand. I was going to ask him which hand did you do it with? I couldn’t do it.

CN:  There’s been such an aura about this film, and I want to see it as much as anyone, it’s become almost bigger than it is. And certainly you have to be aware of that…

LEWIS:  Yes. I think it’s like bad advertising. For it to become what it has become seems unfair. Unfair to the project. Unfair to all of my good intentions. Unfair to anyone that you will sit down and have them see what you’re proclaiming is a finished work. It ain’t finished.

Fascinating, and perhaps the most honest insight into the the film’s circumstance and nature we've gotten thus far.  As mentioned above,  what comes through in this interview - which I haven’t detected in other interviews with Jerry about the film - is a certain amount of respect from Lewis for this hidden work. There’d been much conjecture that the film is 'bad' and desreves to be stashed away somewhere.  I suspect this may well not be the case - and that the truth of the film is likely something which would surprise many of us.  For better?  For worse?  We won't know until we see it...but Harry Shearer's comments about the film in Spy magazine...

...implies that the movie, at the very least, is a sight to behold and functions on a level which is not obvious from what little we know about it thus far.  Hopefully we'll get a chance to see for ourselves some day.  It's not sounding like we well, but stranger things have happend...so hope shines brightly.