Please don't throw The Behind the Scenes Pics of the Day in that briar patch!

I was speaking to an ex-Disney executive a few years ago at a film festival and I brought up Song of the South. We had been watching a lot of films together over a couple of days and I decided it was okay to broach this subject. After all, this unnamed exec seemed very smart and obviously cared about cinema.

My big question: “When do you think we'll ever see Song of the South on DVD or Blu-Ray?”

His response: “Never.” I asked why. “Because it's racist,” he exclaimed.

I know that's the general perception of this film, but I was still taken aback. I thought for a second and asked, “Have you seen it?” Incredibly he said he hadn't and that right there is the root of the problem. People see the Tar Baby image or remember Uncle Remus as a slave, which is wholly incorrect. The film is set during Reconstruction and Uncle Remus is a free man. In fact all the people working on the farm are free.

The heart of the film is Uncle Remus' friendship with the white kids, played by Walt Disney favorites Bobby Driscoll and Luana Patten. Their characters didn't see Uncle Remus as black or a lesser person. He was a friend.

Someday someone at Disney will realize there's a way to release the movie to home video. Harry had a good idea to have someone like Spike Lee put the film in context with a specially filmed intro. It'll take something like that, which is a bit of a shame. It's also a bit hypocritical since they aren't afraid to monetize the cartoon characters and the infamous Zip-A-Dee-Doo-Dah while pretending the actual movie they come from doesn't exist.

Anyway, I'll climb down off my soap box. The movie means a lot to me because it was one of my first memories of going to a movie theater during it's 1986 re-release, so I get a bit worked up when talking about it. 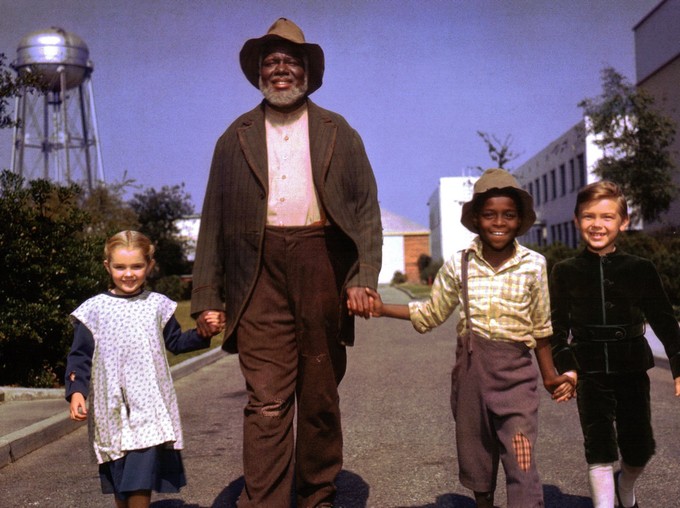 Tomorrow’s behind the scenes pic leaves Disney behind and takes you into some dark places.