Check Out Actual Behind The Scenes Footage From Jerry Lewis's Long-Buried THE DAY THE CLOWN CRIED! 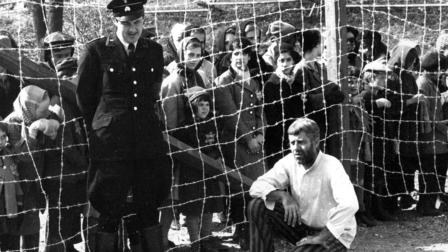 The below six-minute video, recently unearthed by a YouTube user named "unclesporkums", could very well be all we'll ever see of Jerry Lewis's THE DAY THE CLOWN CRIED. It's one of the most infamous films in motion picture history: a concentration camp drama about an untalented German circus clown (Lewis) who finds an adoring audience in condemned Jewish children. When the camp's commandant notices Lewis's rapport with the kids, he orders the clown to help load them onto a Auschwitz-bound train. Hilarity does not ensue. The film was plagued with financing issues throughout the shoot, and ultimately turned out to be, in Lewis's assessment, "bad, bad, bad". Fortunately for Lewis, and unfortunately for the rest of the world, the legendary comic controls the rights to the film, and he is adamant that no one will ever see it.

For the last few decades, cinephiles have had to content themselves with Harry Shearer's recollection of a private 1979 screening, which confirms our greatest hopes (and Lewis's greatest fears) about the film's unique awfulness. As he told Spy Magazine:

There have also been staged readings of the screenplay over the years (I was lucky enough to attend one back in '02), which reveal the stunning tone-deafness of the whole endeavor. Lewis (who rewrote the original script by Joan O'Brien and Charles Denton) saw THE DAY THE CLOWN CRIED as his Oscar film; it was made with professional validation in mind, not the good of mankind. Given that Lewis wasn't exactly in his creative prime at the time of the movie's filming, the mind reels at the disastrous potential of the finished product.

Since Lewis seems hellbent on keeping THE DAY THE CLOWN CRIED locked away in a vault, the sudden appearance of this Dutch behind-the-scenes featurette (hosted by Mondo Film & Podcast, and called to my attention by Lewis biographer Shawn Levy and Scott Weinberg) is cause for rejoice. I don't want to oversell it: it's just Lewis doing some dire clowning and discussing the importance of a temp music score. But just seeing actual footage from this impossible-to-find movie feels like something of a miracle. Savor it.

According to Levy, this footage was shot in Paris (note Serge Gainsbourg and Jane Birkin visiting the set), and aired on Swedish television. Levy says this is the first time he's come across sequences with audio.