Ahoy, squirts! Quint here. My final interview of Comic-Con took place smack dab in the middle of the craziest day. The amount of string pulling I had to do to leave Hall H on that Saturday and get back in before the Fox and Marvel panels would make the House of Cards characters go “Goddamn!” but I did it because I had a chance to talk to Joe and Anthony Russo about Captain America: Winter Soldier, a film I had heard payed homage to my favorite era of American filmmaking. I had to ask them about it and while I only got 10 minutes with the duo, we do talk quite a bit about the influence of '70s film on Cap 2 as well as the film's place in the bigger Marvel Cinematic Universe picture.

I particularly liked hearing about Joe's daughter's interactions with Robert Redford on the set. I hope you guys dig the chat. Enjoy! 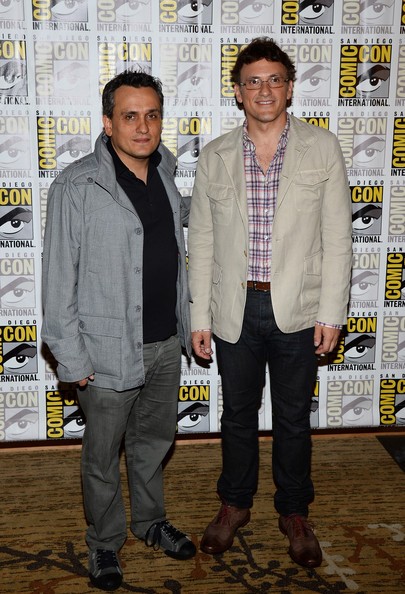 Quint: Thanks for taking the time to talk to me, guys. I know Comic-Con is crazy, so I appreciate it. I gotta say, my interest in Cap 2 is piqued by the word that there's a Three Days of the Condor-style political espionage vibe to it.

Joe Russo: The movie is very grounded in a thriller-esque tone. Frankly, it's a very edgy movie for a Marvel movie because when you're doing a thriller unless the stakes are really high there's not much of a thrill to the movie. So you really have to put the characters in jeopardy and you have to have a layering of the plot that unfolds as the movie goes on. The characters have to be in the dark. There are all those elements of a '70s political thriller.

There are two things that really excited us about this movie when we heard they wanted to sit down with us to talk about the film. One was that I've been collecting comic books since I was 10 years old and one of the first books I ever bought was a Cap/Falcon book, so I felt there was a weird kismet to that. The other thing that excited us is that they wanted to do a '70s political thriller. We grew up cinephiles and one of the things that's strongest in our memories are movies like The French Connection, Three Days of the Condor, The Conversation...

Quint: The Conversation is one of my all-time favorites.

Joe Russo: It's a fantastic movie.

Quint: I actually prefer it to the Godfather movies.

Joe Russo: Not a lot of people can say that!

Quint: Not to take away from the greatness of those films. They're definitely more iconic, but Gene Hackman is just do damn good in the movie.

Quint: And it's so assured. Not to take too much of a detour gushing over this movie, but as a film fan I also love seeing where the it falls in Coppola's filmography. It's right between Godfather and Godfather 2. He's floating on whatever magic filmmaking fairy dust and just smashing every single aspect out of the park. It's great to hear that film was in the back of your mind while developing Cap 2. 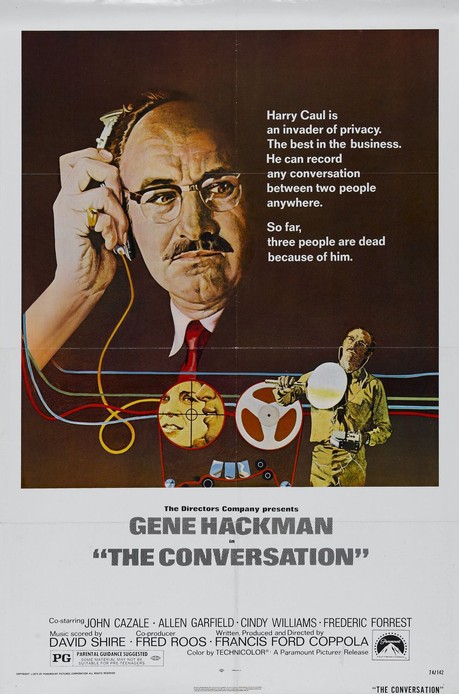 Joe Russo: It's a huge influence on us. I'll be honest. We're really surprised... well, not surprised because they're a great group of people to work with, but Marvel really supported and bought into a huge shift in tone for the character and for the franchise. There's a certain level of verite with this movie. It's shot with a lot handheld camerawork, a lot of longer lenses, it's gritty. There's a lot of action in the movie, but it's based on a sort of realism. We had all the actors training for months because we wanted them on camera fighting with each other. They got a lot of bumps and bruises. We beat the shit out of them over the course of the shoot, but I think it really shows in the movie. We were really true a sort of verite approach to the material.

Quint: So, I take it one of the cues from those types of films that you're following here will include a strong focus on the characters? And also was the fact that films like All the President's Men and Three Days of the Condor inspired the tone of this film the impetus of bringing in Robert Redford?

Joe Russo: To answer the first question, you go watch Three Days of the Condor... the first 10-12 minutes are spent endearing you to Redford's character and then all hell breaks loose. That movie's not nearly as interesting unless you are rooting for and supporting and in love with this character. We spend the better part of the first act of this movie on Cap.

Anthony Russo: It's very much an intimate character piece.

Joe Russo: It's a very strong character piece. There's a lot of very poignant things that happen to him in the first act of the movie that are interwoven with the start of the mystery. We hope that by the end of the first act you're on board with him the way you're on board with Rocky. He's a very endearing individual who has a very strong code. He's somebody you want to root for, somebody you want to see win because he's been through hell.

Quint: So you're not counting on the audience coming in having seen the first Cap movie or The Avengers?

Joe Russo: You always hope that they do, but you can't expect everyone to have seen those movies...

Anthony Russo: It was important to us to make sure that wasn't a prerequisite in any way, but at the same time servicing them and honoring that continuity.

Joe Russo: Plus you have to address certain things. Seventy years later, Cap is alone. In a way it's a very tragic Rip Van Winkle story because he's lost everything. There's very few people you can point to in history and say that one person lost everything important to them in one fell swoop. You have to address that fact and the reality of that. Those are things that make you care about him and how he deals with issues.

Another thing that was really important to us is that we didn't want Cap in this movie to always be “Poor me” and we didn't want him to be goofy grandpa. “How do I use this cell phone?!? I don't understand these things!” For us, he's proactive, he's engaged in the modern world, he's working hard to submerge himself in it, to engage in a way that modern people do. He still has elements of his past that he has to tie up...

As far as Redford goes, that's a dream come true for us because, like I said, we grew up on those films. We've seen them many, many times, we've studied them frame by frame. They're really our film school, a lot of those movies.

When the idea came up we thought, “This is brilliant because we can go full circle with him,” but we thought it was never going to happen because he hasn't really engaged in commercial filmmaking in a long time. He read the script, he loved it. We sate down with him and he said yes. It was a dream come true.

Quint: I bet. I'm a big fan. The Sting was an early childhood favorite.

Joe Russo: I literally showed it to my kids about 6 months ago. They loved it. Then my daughter, who is 8, came to set and Redford was there and she said, “You're the guy from The Sting.” She saw him at craft services...

Quint: That's awesome. So, in Iron Man 3 they show the lingering effects of The Avengers on Tony Stark. Cap is a little more used to a war scenario and isn't going to be hit as hard as Stark, but is he dealing with anything as a result of the events of The Avengers in this new film?

Anthony Russo: Cap is very much still trying to come to terms with the modern world and how the world works, how it's different, how it's not as black and white as the one he came from. In that general sense, yes. He's still dealing with it.

Joe Russo: There's a narrative tie-in as well. There are lingering effects on a narrative level. The overarching plot is directly influenced by The Avengers. There's something really big that happens in this movie that shifts the universe and will directly effect Avengers 2. I think that's why Kevin (Feige) keeps saying this movie is the bridge. From a structural standpoint there's an overarching plot that Cap gets involved in that will ultimately effect the events in the Avengers sequel.

Quint: I was going to ask how you guys can keep a bigger picture in mind while focused on your own part of the giant Marvel story, but then I realized I was an idiot and you're kind of famous for doing just that with your huge amount of TV work! That's kind of your bread and butter!

Anthony Russo: We have that muscle, yeah. (laughs)

Joe Russo: What's really interesting about Kevin... I call him an auteur producer and he's really one of the only ones because he's really the backbone to this whole Marvel Cinematic Universe. He allows free reign for each movie. He's like, “I can't constrict this film just because I got some other idea I want to play out in 2 years. This is got to be the best movie this can possibly be and we can figure that other movie out.” He's great that way. He really went on a journey with us. I don't know if he was expecting the movie to take this hard of a right turn, but I think he loves it. 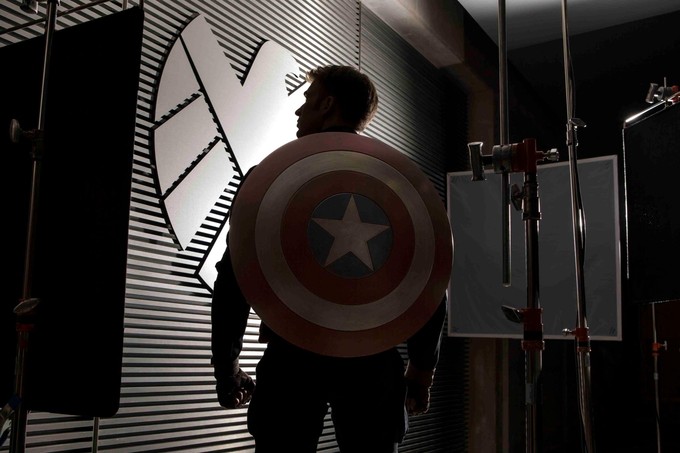 With that, my 2013 Comic-Con is put to bed. I hope you guys enjoyed the coverage on the ground and the interviews that have trickled out after the fact.

I strongly urge you to seek out The Conversation if you haven't already. It's on Netflix, the Blu-Ray is gorgeous... there are easy options out there to see it, so give it a spin. You won't regret it.