Ahoy, squirts! Quint here. Jamie Foxx has had a fascinating rise. Unlike his other In Living Color co-stars, Foxx didn't break into superstardom through comedy features, but through dramatic roles. We touch on that point and others in this Comic-Con chat conducted a couple hours before I saw Sony's big footage presentation. It's always interesting talking to people at the Con because without seeing the footage it's a bit like feeling around a dark room looking for the light switch. I didn't have any context other than the little bit of publicity material featuring Electro and the spy photos that leaked.

However in this case that ended up not being an issue because Foxx was incredibly engaging and surprisingly knowledgable about the character of Max Dillon, both pre and post Electro. Not only that, but he was very forthcoming with his influences in building both characters and creating one multi-dimensional arc for them to share.

When I approached Foxx Movie.com's Erik Davis was finishing up his interview. I made some crack about Foxx getting two Eric's in a row and he said, “You know my real name is Eric Bishop, right?” Cue another crack about us being the Three Erics and thoughts of the three of us in black and white mariachi outfits with comically oversized hats.

Like I said, Foxx was a good sport and had a lot to say. Enjoy: 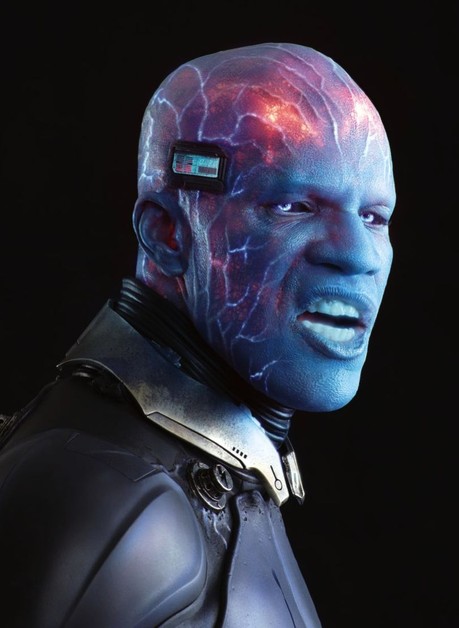 Quint: I gotta start off by saying I'm a big fan. I grew up with In Living Color.

Jamie Foxx: To be honest with you, we failed. We failed when we first started doing our comedies. Unfortunately we got movies that were like other people. Like, there was an Eddie Murphy knockoff or a Martin Lawrence knock-off, so we never really caught wind with a big comedy, which I believe actually saved me because what I notice now with 25 years of being in this is when you have these huge movies that define you in that world it's hard to bend back and do regular stuff.

Quint: You're right, if you can establish yourself in a dramatic work it's easier to move into comedy than the other way around.

Jamie Foxx: Way easier, man. You look at these guys when they define themselves as the biggest comedian in the world eventually, just from time, things change and there's another comedian. I'm fortunate.

Quint: And now you're in a superhero movie! I love how out there the character looks. You're not playing it straight down the middle, you guys are going nuts.

Jamie Foxx: Here's the thing. When they talked about this, I said “Look, I know Electro.” If we go on Electro's history, he's born in Endicott, New York. His father's an accountant. He should have followed in his father's footsteps, but his father leaves. Right off the bat you set Max up as a person that's been hurt. The father's not there. His mom is sort of crazy protective. He even tried to get married. Now, that's not in our movie, but to see a person in their 40s still trying to catch fire... I know guys like that. They're still trying to figure out what their life is about. There are guys who I could pattern this character off of so even before he turns into Electro he can be compelling.

When we got together, Marc (Webb) and I, I said how about it's his birthday and nobody remembers it, including his mom? So, when he goes in and says, “Mom, it's a special day today... is there something you want to tell me?” She goes, “Yeah, like I tell you every day, you're a dummy. Anything else?” Immediately the crowd is going to go, “Awwww.”

I said if we can have him betrayed by three things: love, family and his job then we can have an opportunity to have an old school villain. “Everyone's turned on me so I'm gonna get mine.” That's why I jumped at the chance of this. It wasn't just about “alright, let's go be in a superhero film!” because if you don't know a lot about it you'll end up one-dimensional. We wanted to sit down and actually develop him.

Something that happened to me... I was in LA. I was young, up and coming... the In Living Color days, but I really wasn't famous then. These guys were messing with me and I asked this gangster dude to help me out with it. When I did I was indebted to him. Every club I'd go to, it'd be “Hey, you gonna get me in the club with you?” I'd say, “I can only get in one...” “I got nine.” So, I'd have to pay to get them in.

So that energy that he had, I took it to Electro. When Spider-Man says to me as Max, “Hey, we're friends, we're partners” he remembers that as Electro. “You don't remember me? You said me and you were going to do this together. I'm Electro now, we can do this...”

Quint: So for him, it's another betrayal.

Jamie Foxx: When he betrays me, I take the same sensibility of that gangster that was chasing me in LA and I want him to be the guy that is chasing Spider-Man. Every time I was on the set and someone would ask me what I was doing that day, I said, “I'm chillin'. I'm chasin' spiders. I'll hit you back.”

I wanted to up the ante with the heat on him because I think the way Andrew (Garfield) had now taken control of that role... I wanted him to be uncomfortable. Even when I'd see him out, I'd go “Yo, you know somebody's after you, right?” He'd go (in a soft and, I gotta say, slightly effeminate British accent) “What? What-what-what do you mean somebody's after me?” I said, “Yeah, you've got a formidable opponent, somebody that wants to take your shine. Somebody who wants to take that Spider-Man sign and melt it so it says 'Electro.'”

Quint: Marc's casting has been superb so far, with the first film and now this one... I mean, he's got Paul Giamatti in the movie!

Jamie Foxx: Oh, man. That guy... I shook his hand and said, “Let me get some of that magic dust you got, man.” That's the other thing... Marc is very smart to have actors that are compelling because that way without the mask, without anything else, you're already ready for them to be brilliant. Everything Paul Giamatti was doing I was like, “This dude is so dope.”

Quint: Paul isn't afraid to swing for the fences, he isn't afraid to look ridiculous. That fearlessness is one of my favorite things about watching him work. That's one of things I like about what we've seen of the pre-Electro version of your character, with the crazy comb-over. 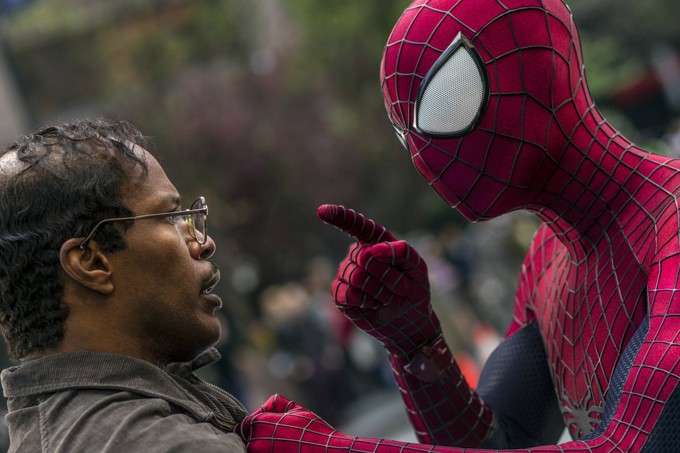 Jamie Foxx: My sister did that. My sister crafted that. She also did the Django look.

Jamie Foxx: Slightly different, yeah. (laughs) I want the nerd version of Max to also be remembered. Like you said with Paul and all those guys, they're not afraid to get after it and really be who they're supposed to be.

Quint: A lot of actors aren't willing to go that far, to show themselves in such an unflattering light.

Jamie Foxx: You know what? Chris Rock said this. He said, “Foxx, you're not afraid to look ugly in a film.” I think if you're an actor, especially if you're a comedian, the minute you start to be aware of yourself you lose because people see it. They go, “Why do you have that makeup on? Why does your hair look so nice? Why you got the Louis Vuitton on right now?” So, as much as I can, man, I try to respect the art and allow the director to director to direct you. Marc challenged me. He wasn't just letting us come on the set, say dadda-da-da and walk off. “You're close, but you're not there yet. Who cares if you've got an Oscar right now, let's get the real thing.” That's what was dope about it.

Jamie Foxx: You have to, man.

Quint: From what I understand Tarantino was pretty strong with you on Django, too.

Jamie Foxx: You've gotta push me because if not I'll fall, all actors do, into what we think is fly. We can't see ourselves, so I appreciate the tough director. Michael Mann, Taylor Hackford, Antoine Fuqua, F. Gary Gray, Oliver Stone, Quentin...

Quint: I don't recognize any of these names...

Jamie Foxx: (Laughs) I remember Quentin... he pulled me aside and said, “Can I talk to you for a second? You have to play a SLAVE! You gotta stop this!” I said, “What do you mean?” He said, “You're coming in and you're already cool. They weren't cool like that back then. You'll get there. I'll get you there.” When a person tells you that and I look at my Range Rover and look at my Louis Vuitton backpack... I have to leave all of that at home. The best thing in the world for an actor to do is to forget he's famous. That's the best thing. 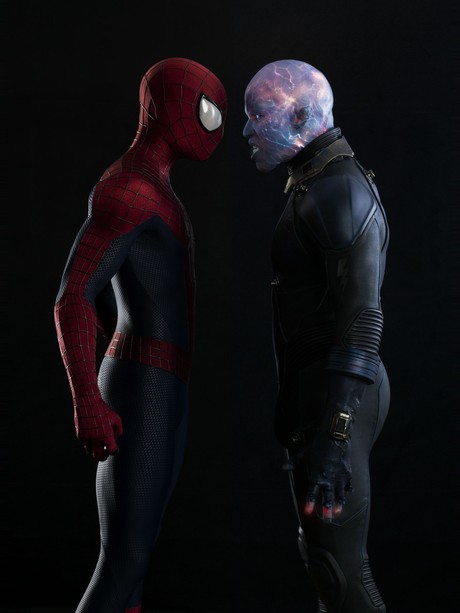 I love interviews where the other party is super excited to talk. In those chats I feel more like my job is to guide the conversation instead of just shooting out questions whenever they stop talking. That was definitely the case here. It was pretty clear that Foxx has been dying to talk about this character and his approach to it for a while and Comic-Con was his first chance to start laying out his approach.

Hope you guys dug the chat! Got a few more Comic-Con pieces to finish before closing out SDCC 2013 for good, so stay tuned!