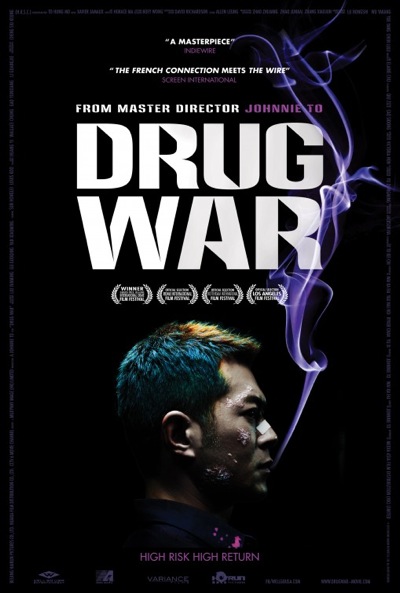 The amusingly blunt title says it all: Johnnie To's DRUG WAR is a brutally stark cops-versus-traffickers crime flick that has little time for backstory or other narrative adornments. It takes place over a roughly three-day period, beginning with the apprehension of drug lord Timmy Choi Tian-ming (Louis Koo), and concluding in the obligatory hail of bullets. In between, it thrusts the viewer out on tightrope with Timmy and the cops (headed up Captain Zhang, played by Sun Honglei) as they attempt to break up a massive drug smuggling ring. Facing execution (and mourning the death of his wife, who died in a lab explosion), Timmy seems more than motivated to give the officers entrée into the trafficking world. But there's also the possibility that Timmy is leading them into a trap, which spikes the procedural narrative with the constant threat of total disaster.

DRUG WAR's stripped-down vibe is largely the result of To's attempts to appease Mainland Chinese censors, who tend to be resistant to less-than-heroic depictions of police officers. But this works to the film's advantage in that the cops, so proficient in the execution of their sting operation, are perilously out of their depth when thrown curveballs by the criminals. They might be able to look the part, but they're tragically unprepared when it comes down to doing the dirty business required of the profession (e.g. imbibe the product they're pretending to push). They're a bunch of Joe Fridays: by-the-book, and ultimately at a disadvantage because of this.

To and frequent co-writer Wai Ka-fai hew to the conventions of the genre in many ways, but they put enough topspin on the story to keep viewers completely off-balance. There are some original flourishes (particularly the deaf-mute brothers who prove anything but impaired when their factory is raided), but the twists are generally subtle. DRUG WAR is just a masterfully constructed crime thriller from a director who knows all the angles. It's just the best pure action film of the year.

When I interviewed Mr. To via phone a couple of weeks ago, I was curious to learn how much mainland censorship impacted the writing and filming of DRUG WAR. Over a brief ten minute conversation (further truncated due to the involvement of a translator), I discovered that there's only so much To can say about that. In this instance, perhaps it's best to let the film do the talking.

(The final question is a spoiler. Skip it if you haven't seen the movie.) 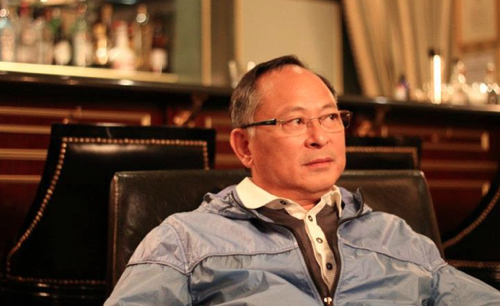 Mr. Beaks: One of the most notable aspects of DRUG WAR is its absence of backstory. This allows us to focus purely on the procedural element, and the extent to which Timmy may be trying to undermine that. How did you approach the telling of the story?

Johnnie To: The script for the film, originally printed out, would be a film around four hours. But movies can change. In terms of the background story for the police, we intentionally didn't put a lot of background information about them. If you tell the background stories about them, it complicates the process of whether the film can pass censorship.

Beaks: I read that you had to shoot some scenes two ways in anticipation of objections from the censors. How often did you go with the alternate version, and how much did that change what you were trying to say with the film?

To: That's not just a couple of scenes. That actually goes through every scene and everything else about the movie between Mr. To and Mr. Wai Ka-fai, who co-directed the movie. So... yep.

Beaks: Visually, the film is expertly staged, but it's not quite as slick as some of your other films. It's got a grittier feel to it. What was your thinking in terms of the visual design?

To: If you're looking for my style in this film, it's hard, because, as I said, all the energy that was spent on is controlling the screenwriter and... moving past censorship. So it's hard to have that slick visual style you're talking about. But looking back, if you look at the film now and know it could pass through censorship, then I would have better control of the visual style.

Beaks: Where did you get the idea for the Mute Brothers?

To: That idea actually comes from research. In the mainland, there are a lot of drug dealers that use people like those brothers because their way of communication is not known to everybody, so it's hard to catch them. That idea is not from nothing; it's actually from what's happening now. They are also better to control and use, because their communication with normal people is very little. They don't usually communicate with people around them easily.

Beaks: The ending of the film reminded me of ANGELS WITH DIRTY FACES, where James Cagney begs for his life going to the electric chair. Was that an inspiration for the conclusion of this film?

To: I actually hasn't watched ANGELS WITH DIRTY FACES. But the message that the ending was trying to convey was that for [Timmy] to escape, he sacrificed a lot of people due to his own selfish goal to save his own life.

DRUG WAR opens theatrically this Friday, July 26th in New York City. It will expand nationally over the month of August. Don't miss it.