Multiple monsters attack in the new Comic-Con Godzilla footage and Quint was there to see it! 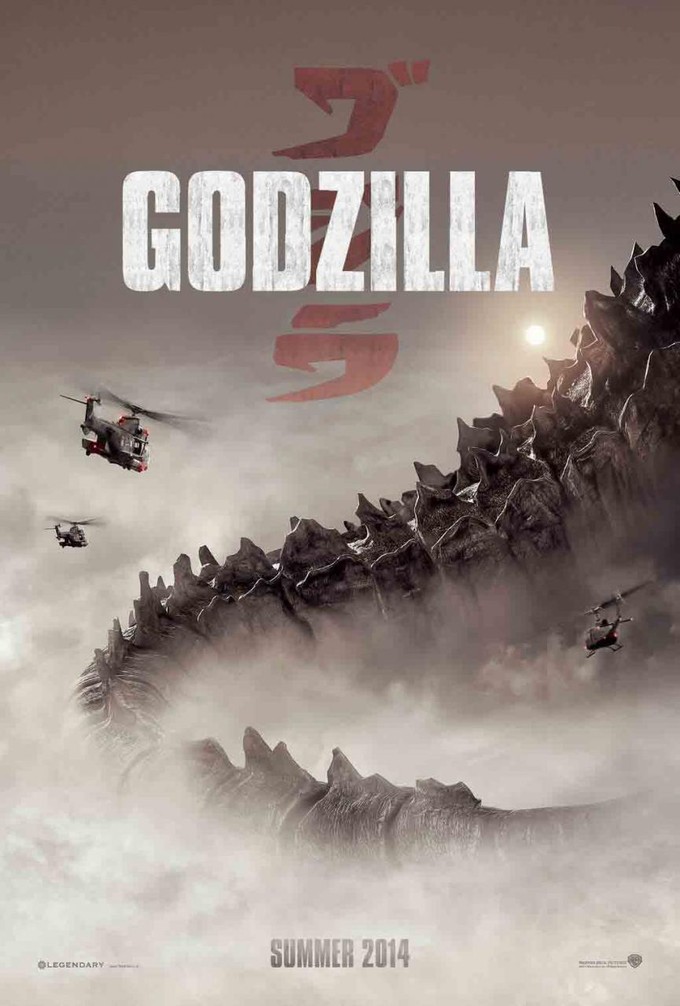 Ahoy, squirts! Quint here. With a little rundown of the Godzilla panel from earlier in the day. After the insanity of the afternoon Godzilla's appearance feels at least 14 days old to me right now, but I guess it's a testament to how cool the footage is that I wanted to skip past some of the bigger name things and make sure I got it written up tonight.

Last year Gareth Edwards' “tone piece” rocked the hall... That piece showed a real world take on what it would look like if Godzilla existed in our reality. The devastation had a 9/11 quality, sombre, massive and very heavy. This wasn't silly.

Well, now they're shooting and had prepared a bit to show us that I'll do my best to describe to you from my way over-loaded geeky brain.

There was the typical sizzle reel thing of having a lot of out of context images flashing at you... Bryan Cranston in some kind of radioactive suit and looking worried, Aaron Taylor-Johnson in full soldier gear pointing his rifle at something, a soldier running down a fiery street, Ken Watanabe looking on in awe of something, a quick reunion shot in a Katrina-esque stadium refugee zone with a kid and Elizabeth Olsen, people running around in a government installation... that kind of thing. Chaos.

Then it cuts to black for a bit, just to draw out the tension, then we see our first glimpse of a monster. Notice I said “a monster” not “the monster.” We get a tall Kaiju that looks a bit like the Cloverfield monster in terms of it kind of having thin appendages and flat-ish face. It's destroying shit and we see it prominently featured at an airport. It towers over parked planes as jets and attack choppers shoot mercilessly at the beast.

One chopper gets too close and is swatted down. All that follows is shown in one shot through the large plate glass windows from inside the airport as if a POV shot of a witness... The chopper is hit and it spins as it crashes to the ground near a parked plane. Upon impact the chopper explodes which starts off a chain reaction as one plane after another gets caught up in the rolling fireball that gets bigger and bigger with each successive explosion.

The camera pans, following the destruction and as the final plane explodes, Godzilla's massive thick tree trunk of a foot comes down right in the middle of the fireball of the last exploding plane. Cut to black again as the audience cheers like mad.

Then an image fades up of the other Kaiju aggressively moving with in the smoke and wreckage of the airport, not seeing Godzilla raise up behind it. As big as the first monster looked when destroying everything you realize that it barely comes up to Godzilla's midriff as the King of Monsters stands straight up behind it. Godzilla roars and that's it.

Now let's get to some panel highlights, shall we? The panel featured director Gareth Edwards and stars Aaron Taylor-Johnson, Elizabeth Olsen and Bryan Cranston. 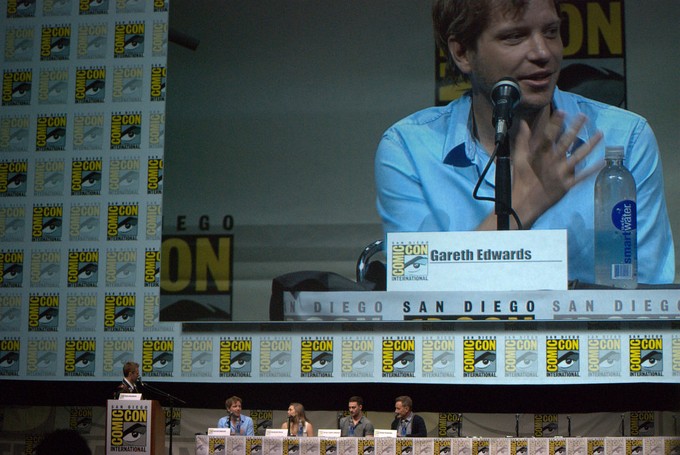 - Gareth Edwards said he felt a load of pressure when joining the film, but most of it came from himself. He said it was always their intention that the movie feels like it's a real part of the Toho legacy.

- Elizabeth Olsen mentioned that her character is a nurse and a mother, but didn't elaborate much past that.

- Aaron Taylor-Johnson said that Edwards pitched the project to him as a “big budget art film,” and that's the movie he's making.

- Gareth was asked about working with Legendary and talked up the artistic freedom of working with them, to which Cranston interrupted with “So you're no different than any other suck up!” Reading it over now it sounds really harsh, but he said it very jokingly.

- Speaking of jokes, Cranston was a tad... feisty... on the panel. When moderator Chris Hardwick asked if he watched the creature feature type shows that would play Godzilla movies all the time, Cranston responded with “You're asking me that because I'm the old guy on the panel!” He then put on an old man voice and face and said “I watched when I could... oooohhhh...” 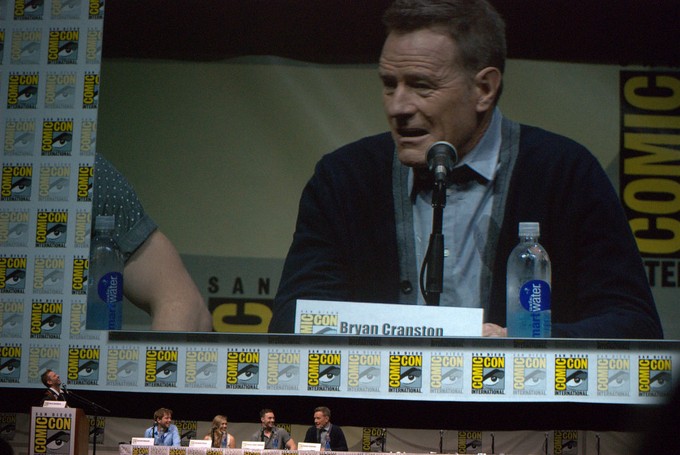 - His serious answer was that, yes, he loved Godzilla. “Godzilla was my favorite monster. He was unapologetic. King Kong was all (he holds his hands out and puts on a sad face, like “why are you mean to me?”). I'm a boy, I want destruction!”

- Wrapping up the short panel, Edwards shared a story about going to Canada to film the movie and having to go through customs. They had a codename for Godzilla to shake off assholes like me from digging up any info on it. When going through customs, the agent asked Edwards what he was doing in Canada. He responded that he was directing a movie. When asked which movie, he responded with the fake title. The customs agent disappeared and came back a few minutes later and he'd obviously googled Edwards' name and said “You're directing Godzilla, aren't you?” Gareth replied, “Yes...” The customs agent said, “Don't fuck it up!” and sent him to a second customs official who said “Don't fuck it up,” a second time. 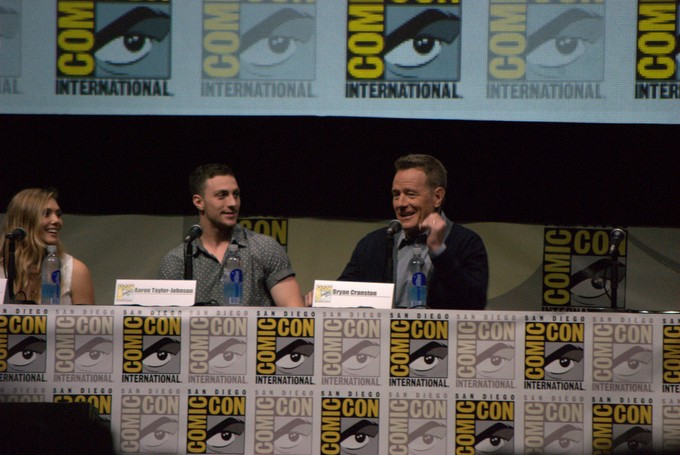 And that was that. Godzilla looks cool in terms of scope and design. We'll see how the story shapes up as the flick gets closer, I'm sure.