Quint describes the funny and awesomely weird first footage from Marvel's GUARDIANS OF THE GALAXY! Comic-Con 2013!

Ahoy, squirts! Quint here with my thoughts on the Guardians of the Galaxy presentation at this year's San Diego Comic-Con. Of all the titles that were sure to pop up, Guardians of the Galaxy was the one I was most curious about. A little birdie told me they started filming a couple weeks ago, so I expected we'd see something, but I was shocked at how much they brought.

It reminded me a bit of the old school Comic-Con, actually. One of the first massive panels I saw was for X-Men 2, which, like Guardians, had only been shooting for a couple weeks when Bryan Singer showed up and showed a good amount of Wolverine taking out the soldiers invading the mansion and ended with Magneto screaming “YOU SHOULD HAVE KILLED ME WHEN YOU HAD THE CHANCE!” All these years later and it still sticks with me how great of a surprise that was.

James Gunn has a weird sense of humor. So does the source material. I mean, it's about a group of space dicks that form an unlikely group out of assassins, genetically engineered brutes, walking trees and gruff, machine gun-wielding raccoons. Think about that for a second, let that sink in. The Marvel film universe has gradually led us to this point where the real crazy shit can happen.

Marvel Films Head Honcho Kevin Feige brought out James Gunn and most of the cast, finally introducing them as their parts. Here's the list, should you want it. Yondu – Michael Rooker. Nebula – Karen Gillan. Koranth – Djimon Hounsou. Ronan the Accuser – Lee Pace. The Collector – Benicio del Toro. Drax the Destroyer – Dave Bautista (who was a fucking monster of a guy in person, by the way. He was wider than the table they were sitting at). Gamora – Zoe Saldana. Peter Quill/Star-Lord – Chris Pratt. 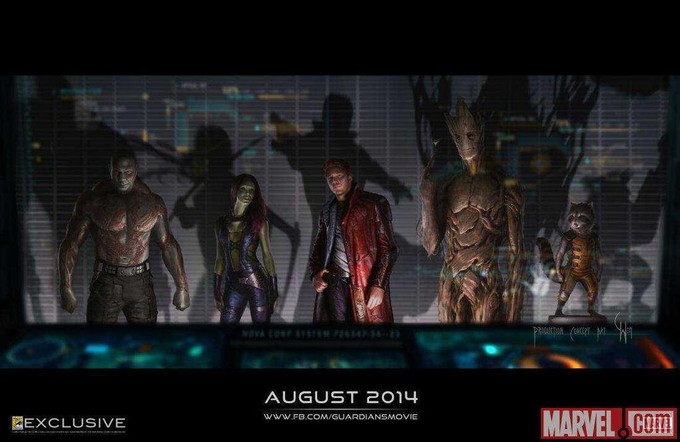 Keep in mind they're shooting in London and just flew in that day from London (an easy 14 hour flight) and will be flying back tonight to go back to work. Pretty awesome of them. And the panel was really fun, but let's go over that footage before we jump into that stuff, shall we?

Footage started with a dusky shot of a man entering a ship of some kind. The whole thing is very dark. The silhouette slowly walks around a few halls until he's in a room with a silver orb floating atop a pedestal. He reaches for it and takes it without a problem. When he turns around we see it's Chris Pratt and we're not the only ones to see him. A group of angry looking men with big scary looking guns rush in (led by Hounsou) who screams at him to drop the orb.

Needless to say, he's arrested. John C. Reilly is like a space cop who is looking over his prisoners, which is the skeleton the footage hangs on. It's their way of introducing these guys to us. There's a deputy of some kind in the room with him and he's talking to him throughout. “We arrested these five on Zandar. Check out the rap sheets. Drax aka The Destroyer. He's killed scores of Ronan's lieutenants in his search for vengeance...” We see Drax standing, cuffed, in some kind of line-up room/observational thing... except super sci-fi'd with electric windows and all that jazz.

”Gamora, Thanos' adopted daughter... her own personal death machine.” and we see a green-skinned Zoe Saldana standing like she doesn't give a fuck.

Then it cuts to a little furry guy standing on a box in the observation room and the audience went apeshit. I couldn't hear what John C. Reilly was saying, but he did say “Rocket Raccoon” and “over 50 charges of vehicular theft and escape from lockup.” Rocket looks annoyed and kind of exhales loudly, almost a sneeze.

Then it cuts to a tall figure standing in the observation room. So tall in fact that we don't see his head. Looks like someone just planted a tree in the room... until it moves, ducking down to look through the window so we see his face. “Groot.” Reilly described him as “houseplant/muscle.”

Now it's back to Pratt. “Peter Jason Quill. He's also known as Star-Lord.” Deputy, “Who calls him that?” “Himself, mostly. He's wanted for minor theft, avoiding prosecution, fraud...” As Reilly is reading off the charges, Pratt is doing that turn-the-crank-jack-in-the-box middle finger thing, then acting all innocent. “I'm sorry! I didn't know how this machine worked!” The way Pratt sold that moment killed the audience. So funny.

The rest of the footage was more montage style, beginning with Pratt being led through alien jail. He sees a big blue brute guy (mostly make-up and practically executed) picks up a pair of headphones. Blue Swede's Hooked On A Feelin' can be heard coming from them. “Hey, hey, hey! That's mine!” The alien prisoner defiantly puts them on his head. Quill breaks free, hands still cuffed, and chases after him. “Come here, you big blue bastard! Take that off your head right now!” And he tackles the big guy.

”They call themselves the Guardians of the Galaxy.” His deputy: “What a bunch of a-holes.” 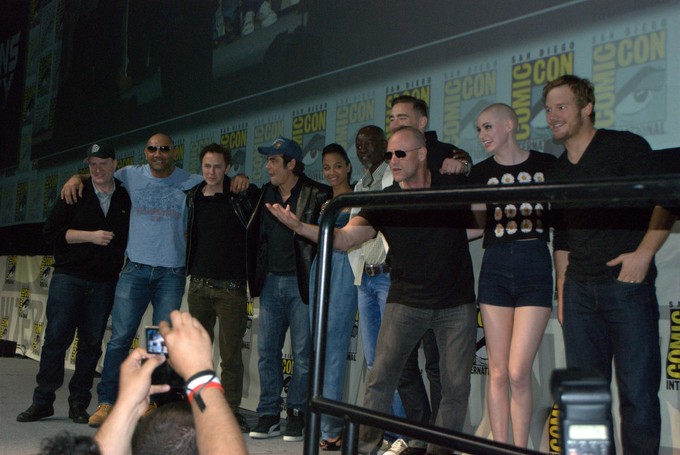 The footage was silly, ridiculously charming and easily the most fun of anything played in Hall H today. James Gunn's sensibilities were on full display and Chris Pratt was knocking it out of the park. I love him on Parks and Rec, but he's on another level here. I'll eat my hat if he's not an a-lister in the next couple of years.

The secret to a group this weird is to jump headfirst and give it all you got. You can't shy away from the bizarre nature of this particular story at any point or the whole illusion shatters and it seems like Gunn, Feige and the rest of the Marvel team knows this... and turned the weird up to 11.

With only some 14 days worth of shooting represented, this thing looks big, fun and totally aware of itself. If the whole can match what we just saw today then this could be my favorite Marvel movie to date.

Now let's rundown some moments from the panel:

- Gunn said working with Marvel is like making a “really big independent film.”

- Chris Hardwick commented on Chris Pratt's “amazing body transformation.” Was that to get ready for this movie? “Nope. It had nothing to do with it, it was just weird timing. I had a tapeworm.” He paused for the laughter and continued slightly more seriously. Slightly. “I got the role 6 months ago and they were like 'Great job, but you're too fat!' Alright, I can work on that! Luckily they trusted me and got me a personal trainer.”

- When asked on who Star-Lord is as a character, Pratt responded: “I can't tell you a lot, but what I can tell you is that he was a Fed-Ex executive who went down on a plane when it crashed, ended up on an island...” Hardwick said, “That's Castaway. Do you talk to a volleyball?” Pratt: “Yeah, Bautista plays the volleyball.” Now for the not really serious, but slightly more so answer. “Peter Quill is, like, this guy... who lives in space. He's kind of a jerk. He had a hard time as a kid and now he goes around space making out with hot alien girls and kind of being a rogue. Through teaming up with these guys, he finds a higher purpose for himself, which is to like really care about somebody, to really fight and put his life on the line to help this new family he finds. That's who Peter Quill is.”

- Zoe on playing Gamora. “I've been blue once, so I thought 'why not try green?' I'm having a great time.” Said she talked to her 11 year old nephew (and knower of Marvel things) about Gamora. He asked her who she thought Gamora was. “She's this feisty warrior...” “Nah-ah. She's an assassin,” he interrupted. So that's how she's playing it.

- Dave Bautista is a very intimidating dude. I mentioned he was wide... that dude is thick. He looked like he's nothing but dense muscle, but it turns out he was the most humble guy up on the panel. “I'm still at the point where I go to set every day and I can't believe I got this freakin' job. James saw something in me when I auditioned. I'm still not sure what it is. I fought really hard for this job. I have to admit, it's something that I wanted more than anything I've ever wanted in my life. When I got the job I broke down and cried like a little baby.”

Feige said that Dave won the job 6 or 7 times over with his acting ability, not just because he had the body shape to be intimidating.

- Djimon Hounsou on Koranth: “He is a great ally to Ronan and Thanos.”

- Karen got a whole lot of cheers. You'd think she was on Dr. Who or something... Anyway, she had a head of pretty red hair that looked great on her for about 3 minutes until they got to her question. “Isn't Nebula bald?” “Yes... yes, she is. I might have done something a little bit crazy...” and off comes her red hair, revealing a shorn head. Somehow even more adorable. There were audible gasps from the Who fans around me when this happened. Gillan got so caught up in the moment she threw her wig into the audience and immediately went “I need that back! I'm sorry, I just felt an urge. It got the better of me! I don't know what that was!”

- On her bald look, which Hardwick rightfully complimented, “I was worried I was going to look like an overgrown fetus, but it's liberating!”

- Next was Micheal Rooker who came out mostly bald himself. He had a little mohawk strip of hair down the middle of his head, a sure nod to the magnificent crest his character, Yondu, rocks in the film. He rubs his baldness against Gillan's baldness. In a sweet way, you pervos.

Here are the baldies playing with Karen's wig: 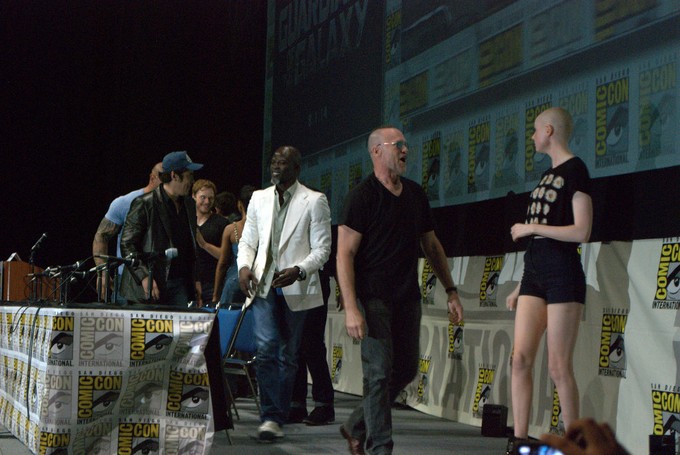 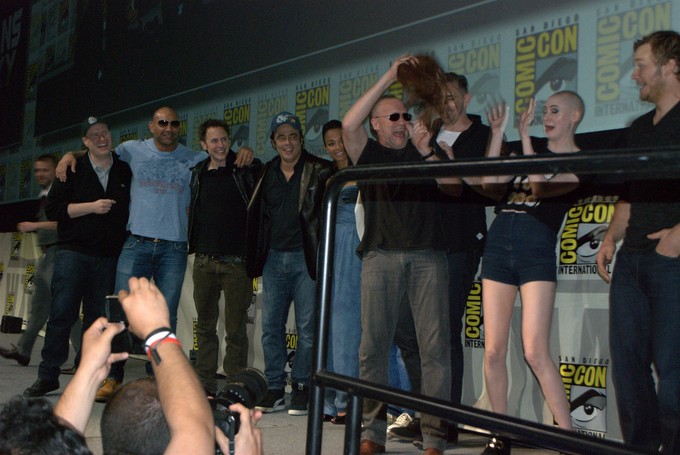 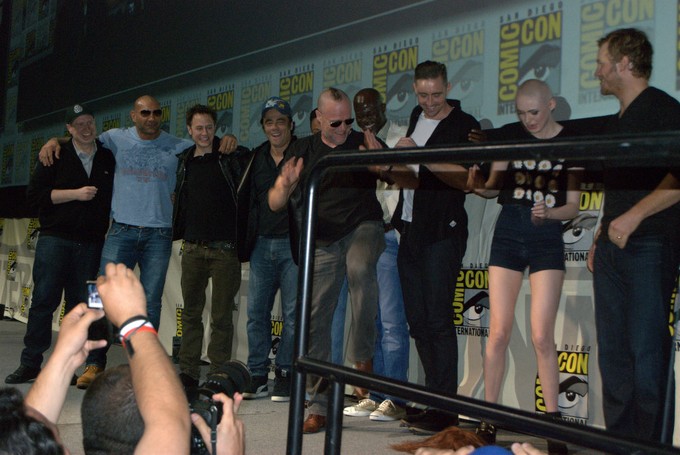 That was it for the big surprise Guardians of the Galaxy segment of the panel. No comments on the voices of Rocket or Groot, but Disney's D23 is only a few weeks away, so I'd wager we probably get more Guardians news soon.

Stay tuned for more Comic-Con coverage, folks! Cranking out as much as I can tonight before I literally can't stay awake any longer! What's next... perhaps... Godzilla?